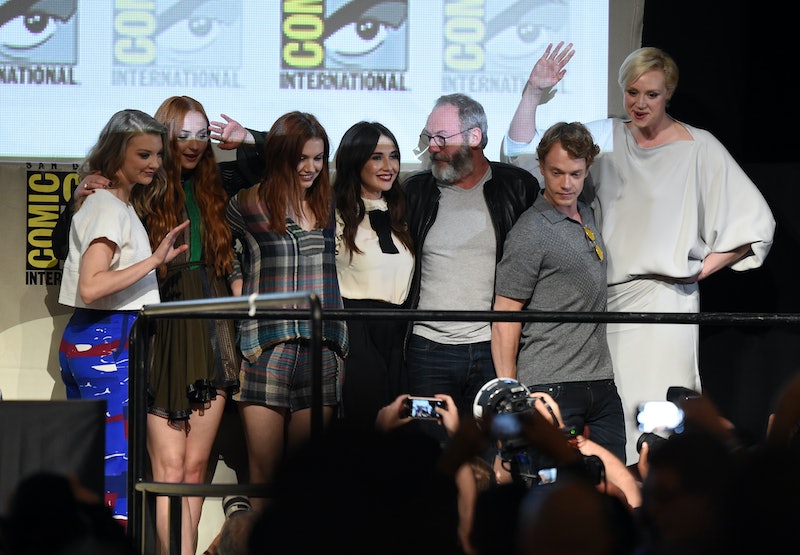 Game of Thrones may kill your character off, but friendship is forever. While the HBO series has only been off the air for a few weeks, the cast is notorious for getting together, for either at a fancy event or an epic beach day, and making all of us jealous in the process. Has the Game of Thrones cast hung out IRL since Jon Snow's death in the Season 5 finale? You better believe it!

The biggest get together, of course, was San Diego Comic-Con this month. It's events like these where the cast this vast gets to really see each other, especially when the show is filmed in several countries. You may never see the actors who play Davos Seaworth and Margaery Tyrell on screen together in character, but conventions can make that happen for you IRL. That said, I'd like to name Maisie Williams (a.k.a. Arya Stark) as the cast MVP — she's clearly super fun to be around and spends time with everybody.

I mean, think about it — how can you go through something as intense as Game of Thrones, from a production and fan audience perspective, and not come out best friends? Even the cast members who have come and gone still get together once in a while. Check it out, here are a few recent times that the cast has had goal-worthy hangs.

Actually, you know what? Varys liked Sansa quite a bit, so I'm not surprised the actors are friends.

You've absolutely got to follow Sophie Turner and Maisie Williams on social media. The Stark sisters are the absolute best, and they haven't even shared scenes together since Season 1 of Game of Thrones. That love runs deep!

It's no Kit Harrington and his man bun, but this picture of Emilia Clarke and Nathalie Emmanuel might be my new favorite celebrity selfie.

This fan encounter is especially important because it confirms that Yara Greyjoy is back!

Whatever whatever, just Maisie Williams and Joe Dempsie at a music festival #StillRowin' no big deal...

See, even Davos and Melisandre can get along.

Northerners Who Have Never Met

Alfie Allen has a few more selfies from Comic-Con, but this one with Hannah Murray, who play Gilly, is my favorite.

It Feels So Good

I know, this one was two months ago, but how cute! They weren't in Season 5 so they get an exception.