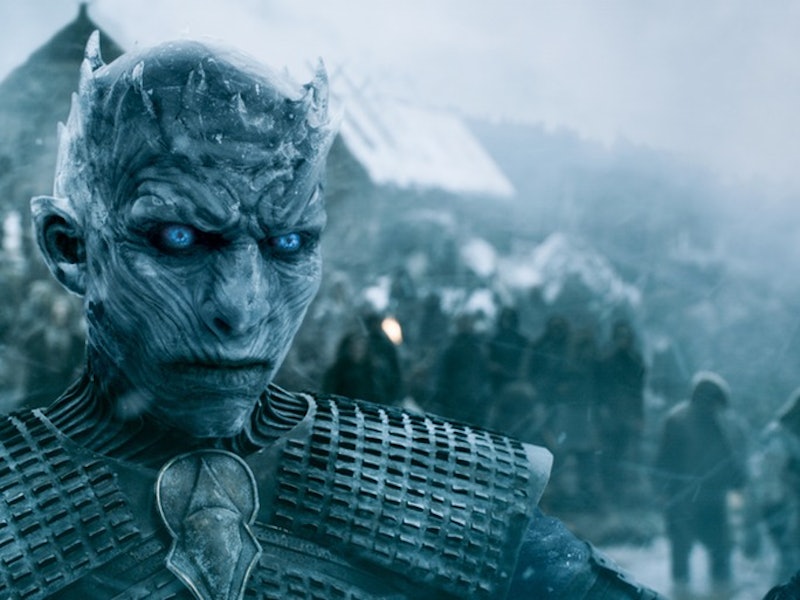 Game of Thrones is a series that lives and dies on theories. When you're watching the third wedding that ends in homicide, you've got to be able to tell yourself that this is all leading to something. And that's where the theories come in. But, sometimes the theories can get a little out there. For example, one look at the insane Game of Thrones theories on Reddit, and you'll be stunned by the fan creativity. They have everything from theories that favorite characters are going to meet up with each other to theories about magic and sorcery yet to be revealed in the lands of Westeros and theories about one secret that spawned a thousand more secrets, all of which will eventually be revealed and make everything make more sense.

And, of course, there's the fact that HBO's Game of Thrones is based on George R. R. Martin's A Song of Ice and Fire, a book series that published its first installment nearly 20 years ago... so that's plenty of time for fans to scour its collective 10,000-plus pages and come up with a few ideas of their own. There are theories that even the most casual GoT fans have probably heard of, like R + L = J, which pretty much feels like a narrative guarantee at this point. But, then there are the less common theories — the ones that start from one small spark in Martin's words and spread like wildfire in the hands of ASOIAF's most devoted fans.

Reddit houses much more than just your average "OMG, what if so-and-so get married and rule the world and everything ends happily ever after" GoT theories; these are highly researched, highly plausible/highly insane thoughts on the tangled webs that make up the world of Westeros... [Spoilers ahead.]

1. Jon Gets His Own Coming-Of-Age Pyre

Pretty much every person associated with HBO's Game of Thrones is insistent that Jon Snow died at the end of Season 5. And, pretty much every longtime fan disagrees with them. There are many theories that Melisandre has been loitering around the Wall and giving Jon heart-eyes so that she could eventually be the one to resurrect him, as we've seen with other characters who worship the Lord of Light like Beric Dondarrion. But, I much prefer this Reddit theory proposing that because Jon is a secret Targaryen (a widely accepted theory upon which many other theories are built), when the Night's Watch goes to burn his dead body, he might be resurrected by the flames, in the same way that Dany was transformed into the Mother of Dragons by her own pyre. Reddit user "niltermini" says this wouldn't be because Targaryens are immune to fire, but because GRRM has said in the past that Dany's transforming flames invoked a "magical property."

The White Walkers are one of the most mysterious entities in the ASOIAF world, and therefore there's plenty of room for theories on them. You don't have to look far for tons of believable angles on the Night's King, but one of the wildest White Walker theories on Reddit is — wait for it — that the White Walkers actually built the Wall to protect themselves . Reddit user c_forrester_thorne posits that contrary to what we've heard from Old Nan about the legend of the Last Hero — the man who somehow defeated "the Others," sending them back into the North and resulting in the Wall being built by the first Night's Watch members — the Last Hero actually came to a diplomatic agreement with the White Walkers that everyone would stay on their own sides. The White Walkers built the Wall made of ice to protect their own lands and kept to themselves. But, the men of Westeros haven't kept to their agreement, with men living on the wrong side of the Wall, and now the White Walkers have risen again to protect their rightful claim.

4. The Boltons Just Got WORSE

Of course there are also Game of Thrones theories that take place more in the land of the living. Haha, just kidding, these are all about resurrection and immortality because this is Westeros, and everything is crazy! One of the more insane theories on Reddit (and probably the one steeped in the least actual narrative evidence) surrounds one of ASOIAF's least beloved characters. Reddit user maj312 has developed a detailed and creative theory that "there has only ever been one Bolton patriarch" because Roose Bolton is immortal. The Boltons are known for flaying the skins of their enemies and maybe that's not just because they're disgusting, but because Ramsay puts those skins to magical use, much like the Faceless Men, to take on new identities and defeat his enemies, helping the ancient House Bolton survive formidable foes like the Starks. And, Roose only keeps the terrible Ramsay around so that he can one day take over his body and continue to be head-Bolton-in-charge. Oh, and the best part? Roose is immortal because he's the progeny of the union between the Night's King and his Other wife. Because it always comes back to the Night's King.

OK, this one isn't about immortality or resurrection, or anything death-related, I promise. No, this is just a theory about your favorite incest twins, Jaime and Cersei. You see, there are some very common theories that Jon is a Targaryen and that Tyrion is a Targaryen, I think, because people like Jon and Tyrion and even though half of the Targaryens we know anything about have been homicidal lunatics, the theory still prevails that somehow that bloodline will come back together and save the world. But wouldn't it make some sense if the pretty morally corrupt and incredibly blonde Jaime and Cersei had the blood of dragons in their veins? It's a theory that often isn't given much legitimacy, but its supporters stand by these facts: Barristan Selmy tells Dany that the Mad King was open in his lust for Tywin's wife, Joanna, and took "liberties" regarding the old tradition of the king's rights to visit newly wed wives during their bedding ceremonies; they have the blonde hair, light eyes, and propensity for incest of Targaryens; they represent the tradition of about half of all Targaryens going mad... part of this theory is that Cersei might become a Mad Queen and try to burn King's Landing like Aerys II. One Reddit user adds that it would be a "sweet irony" if Tywin's most hated child, Tyrion, was actually his only legitimate heir.

And, finally, one that revolves around a character everyone can agree to like: Hodor. Every ASOIAF fan wonders why it is that Hodor only says, "hodor." The most upvoted Hodor theory on Reddit, written by a deleted user, lays out a few (semi-loose) facts pretty casually: "In the first book, you lean that 'Hodor' is actually named Walder and he is the grandson of Old Nan (Stark kids' nurse). Nobody knows why he only says 'Hodor' ... Melisandre tells Stannis that the enemy of R'hllor, The Lord of Light, is the Great Other. R'hllor is usually associated with fire, light, and heat, whereas the Great Other is associated with darkness and cold. Melisandre tells Stannis that the name of the Great Other must never be spoken. In Norse mythology, the god of winter is named Höðr."

And that's it, cue the *bum-bum-bums*. Commenters on the original Reddit thread seem to think these statements are implying that Hodor might be that Great Other. Elaborators on the theory posit that perhaps Hodor has seen something so terrifying in his childhood regarding the Great Other, that it affected his mind, turning him into the Hodor we know now, but also that he offers up his "hodors" as a warning about the Great Other. In other words, Winter is Coming and Hodor is Hodor-ing.

See, this is what the GoT hiatus does to fans. These theories are actually starting to make sense!