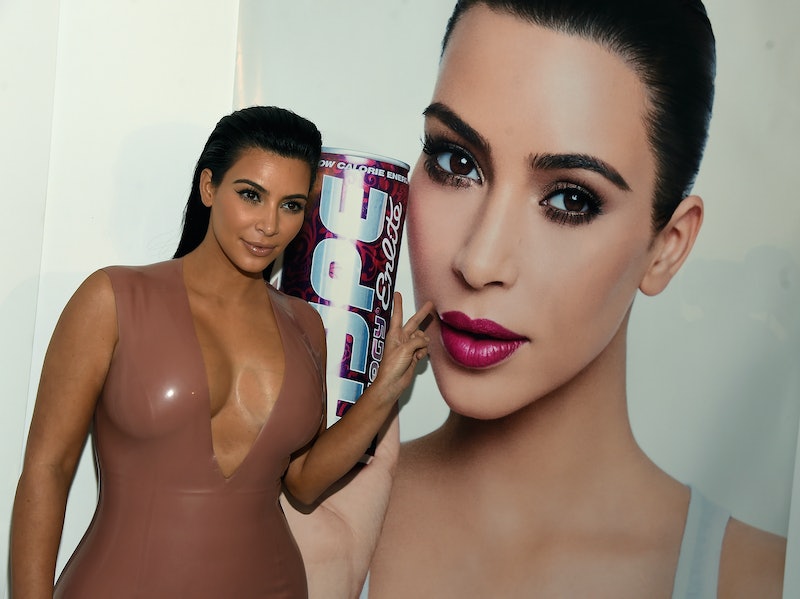 Kim Kardashian West may be one of the most polarizing figures in the entertainment industry, but there's got to be a great consensus between people regarding how gorgeous she is. Maybe it's her popularity paired with her looks, but Kim Kardashian's HYPE Energy ads are totally gorgeous. The reality television star channels famous fashion icons such as Marie Antoinette, Audrey Hepburn, and if you consider Kardashian an icon, there's one look that basically screams Kardashian sisters hybrid. Seriously, I'm loving the images.

While Kim does take on the looks of iconic women in history, she also rocks a look that, while not based on anyone, is well known in fashion, especially as of late. In one of the ads, Kardashian can be seen with her dark locks plaited down into cornrows. It is interesting timing considering that her sister, Kylie, just recently was involved in a controversy over sporting cornrows on her Instagram. Jenner was constructively criticized for the hairstyle by genius actress and outspoken opponent of cultural appropriation Amandla Stenberg. While the controversy has since lost some steam in the media, it does lead me to wonder if Kim will face similar criticism for her ad. While the image is meant to sell energy drinks and may not be viewed in the same way as a private Instagram post, needed criticism has been launched at ads and fashion houses who have culturally appropriated a tradition in the past.

Outside of the potentially problematic image though, the HYPE Energy ads are completely gorgeous, and we can't deny the incredible styling that went into the shoot. One of Kardashian's most notable transformations is her transition into actress Audrey Hepburn. With cropped bangs, a short, high pony, and solid blank outfit complete with cropped skinnies, Kardashian looks every bit the part of the famous actress in Funny Face.

In another image, we see Kardashian's signature smokey eye and contoured face has completely disappeared in favor of a washed out base and pink blush over her gorgeous cheeks. She holds her lace gloved hand up be her cheek in an image clearly meant to channel the infamous Marie Antoinette.

Regardless of how you may feel about Kardashian, appreciation for the styling on this shoot is easy to muster. Plus, Kim truly does look gorgeous like usual. It's her consistent beauty and very signature style that may be the reason one of her looks is super reminiscent of the collective Kardashian style. I can't get enough of these HYPE ads and would love to see Kim rock more artful looks like these in the future.

More like this
Iris Law's Skunk Mullet Is Not For The Faint-Hearted
By Tomi Otekunrin
The "Kate Moss Contour" Is TikTok's Latest Makeup Obsession
By Olivia Rose Ferreiro
Kate Had A Solution When Tom Cruise Broke This Royal Rule At The 'Top Gun' Premiere
By Frances Stewart
2022's Top Wedding Hair & Makeup Looks, According To Pinterest
By Olivia Rose Ferreiro
Get Even More From Bustle — Sign Up For The Newsletter