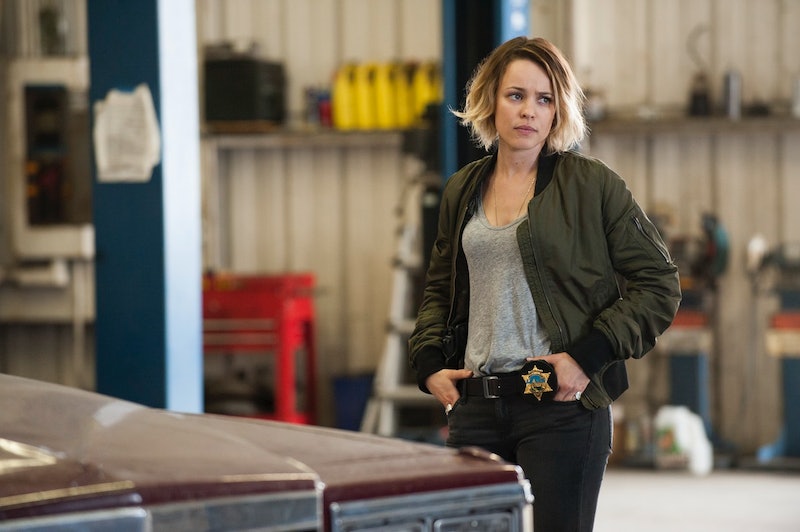 OK, Nic Pizzolatto, fans know you've said that Seasons 1 and 2 of True Detective aren't connected, but frankly we don't quite believe you. Sure, Season 2 has a totally different but equally bleak setting, and a new but equally troubled cast of main characters. Pizzolatto also seems to have taken the criticism of Season 1's lack of strong female characters into account, which makes this particular viewer very happy. The characterizations of the women in Season 2 are similar to the show's men — complex, flawed, and intelligent individuals who can't seem to escape the demons of their pasts.

Certain parallels between the seasons are to be expected and, on their own, don't indicate any connection between the two cases. Seasons 1 and 2 each showcase disillusioned detectives who are wary of one another, cops who have committed their own crimes, literary allusions, and corrupt individuals in positions of power. But as Season 2 progresses, signs that the two cases are connected continue to crop up and there have been multiple hints that cannot possibly be coincidental. From creepy animal masks (not something you see everyday) to thinly veiled Yellow King references, many viewers are prepared for a finale reveal that somehow links the two crimes that occurred on different sides of the country.

Here are five signs that the Yellow King's reign of terror is not over:

In Season 1, the ritualistic killings in Louisiana were carried out by five men wearing animal masks. When we are shown Ben Caspere's sex dungeon, there are four animal masks mounted on the wall with one slot noticeably empty — most likely for the raven mask worn by Ray's shooter. Reddit user it_was_too_obvious suggests the murderers in Season 1 and Season 2 are members of the same cult that has chapters across the country. Alternatively, the prop department for the show is strapped for cash and needs to reuse the same masks, but that theory seems less likely (in my humble opinion).

2. Rust & Marty Apprehended Only One Perpetrator

Although Rust and Marty acknowledged that putting one perpetrator in prison was a better result than they had expected, it still meant that multiple members of the alleged criminal conspiracy were at large when Season 1 concluded. As Todd VanDerWerff at Voxx points out, the conspiracy "extended into the highest realms of power and also contained elements of weird, occult demon worship." This means it's certainly not unthinkable that it extends beyond Louisiana and has connections to the powerful and corrupt underworld of Season 2's Vinci, California.

3. The Cult Leaders From Season 1 Could Have Relocated

Alternatively, the masterminds behind the Season 1 ritualistic abuse and murder could have skipped town after Errol's death. The finale shows us that the murder case has become national news, and an anchor asserts to her audience that Errol was in no way related to the Louisiana Senator Edmund Tuttle. Although the case was declared closed, much to Rust's dismay, the perpetrators still may have felt safer from potential police detection a few thousand miles away. Vinci is rife with politically corrupt and powerful individuals, so if the cult from Season 1 had existing connections there, it would be the perfect place to hide out.

4. There Have Been Allusions To The Yellow King

There have been multiple allusions to the Yellow King this season. A skeleton with a crown can be seen in Caspere's house, which was the first allusion. The more obvious reference came in "Down Will Come," when a pimp named Ledo Amarilla was introduced. He's established as having a connection to Ben Caspere's murder — one of his sex workers pawned the dead city manager's watch. His last name is the Spanish word for "yellow," but there's more — Ledo is a shortened version of "Ledoux", which Vox pointed out is seemingly a reference to Season 1's Reggie Ledoux, who was once suspected of being the Yellow King.

Reddit user Nerdcuse points out that Season 1 drew inspiration from King Of Yellow, a book of short stories by Robert Chambers. The stories were independent of one another, but they shared recurring themes that tied them together. It's possible that True Detective is following a similar formula and all the seasons will stand alone, but will also have an overarching element that ties them together.

In short, Seasons 1 and 2 may be more connected than Pizzolatto has led us to believe, but we probably shouldn't hold our breath for cameos by Matthew McConaughey and Woody Harrelson. Although this theory is considerably less dramatic than the others, it sounds like the most plausible one.