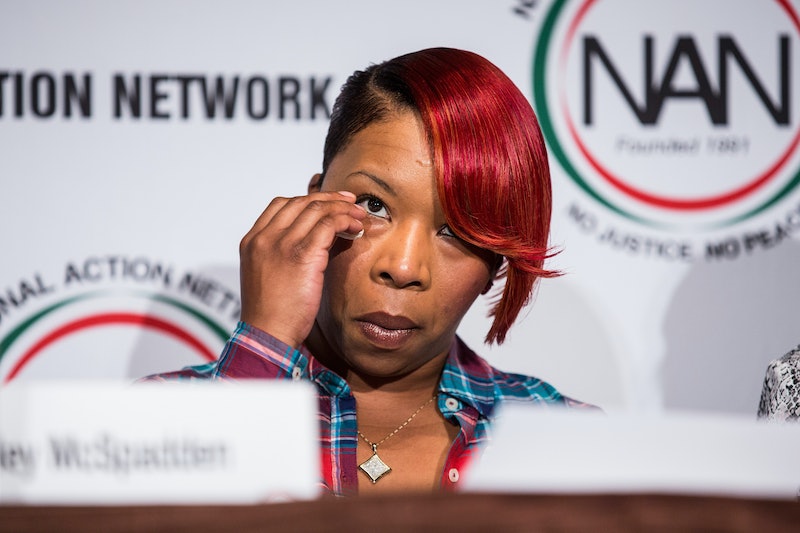 Their sons' names have sparked nationwide protests and created serious dialogues about race relations in the United States, but the mothers of Eric Garner, Tamir Rice, Trayvon Martin, and Michael Brown have not received legal closure for the death of their children. The four women gathered together in a touching show of solidarity last week at a candlelight vigil held in honor of the one-year anniversary of Garner's death. This photo of the four mothers whose black sons died at white hands was a visual reminder of the men and women killed and injured every day by racial tensions and police brutality.

It's unlikely that any of these four women will receive legal justice for the deaths of their sons. For most, the legal system did not deliver necessary indictments or juries failed to deliver guilty verdicts against their sons' killers. If it wasn't for social media and activists, their sons' names would be forgotten, just like dozens of others who die each year at the hands of police. This photo sends a message — that no matter what happens, these women are bonded together by inexplicable tragedy. And I pray that in future years, other mothers don't join their ranks.

They hope so, too. "We know next time, it could be your child,” Garner's mother Gwen Carr said at the rally before the vigil. "This club is full. It’s closed."

Reactions to Garner's vigil, as well as recent outrage over the death of Sandra Bland, show that the nation agrees with these mothers, and they're unlikely to stop fighting anytime soon.

But sadder still is that even though everyone knows their names, these black victims still haven't received full justice. The youngest, Tamir Rice, was only 12 when he was shot last November while sitting on a swing in a local park. A passerby called the police and said Rice was holding a gun, though noted it appeared to look fake. According to officers who arrived at the scene, Rice allegedly pulled out the weapon at them. Before the car came to a stop, one officer had opened fire. Rice died the next day, and the gun was found to be fake.

But the officer who shot the 12-year-old may never even be on trial. In June, the Cuyahoga County Sheriff's Office had completed its investigation and interviews, many of which weren't completed until months after the shooting. There is still not a decision on whether the Ohio grand jury will indict the officer in question.

Martin, who was 17 when he was shot by Florida resident George Zimmerman in 2012, ignited one of the nation's earliest dialogue on racial tensions. Martin was unarmed, holding just candy and an iced tea when he was shot by Zimmerman, a white man who later claimed self-defense under Florida's Stand Your Ground statute. In 2013, Zimmerman was acquitted in Martin's death, and in 2015, the Justice Department ruled that there was not enough evidence to prosecute Zimmerman for a federal hate crime.

One of the most explosive responses to racial tension and police brutality followed the death of Michael Brown in Ferguson, Mo., in the summer of 2014. Eighteen-year-old Brown was shot by a white police officer, causing the predominantly black town to erupt in protest. Brown became a household name, creating huge traction for the #BlackLivesMatter movement. Peaceful protests, as well as violent riots, broke out throughout Ferguson and across the country, launching the issue of police brutality to front pages. However, the officer in question, Darren Wilson, was not indicted of any charges, and the Department of Justice cleared him of any civil rights violations.

And just one year ago, Eric Garner's last words, "I can't breathe," became the rally cry for the #BlackLivesMatter movement. While being arrested last July in New York City, Garner was placed in a chokehold, and, despite telling officers he couldn't breathe, lost consciousness. He was not given CPR at the scene and was declared dead at a hospital an hour later.

The chokehold that killed Garner is an illegal maneuver, prohibited by the NYPD. However, the police officer was not indicted. Garner's family sued for compensation, and earlier this month, the city agreed on a $5.9 million settlement to be paid to Garner's family. "Don't congratulate us," Garner's mother said. "This is not a victory. The victory will come when we get justice."

One look at family and friends shows just how much black lives do matter. As inspiring as it is to see these four victims' mothers come together, their tragic union only reminds us the impact of each life lost.