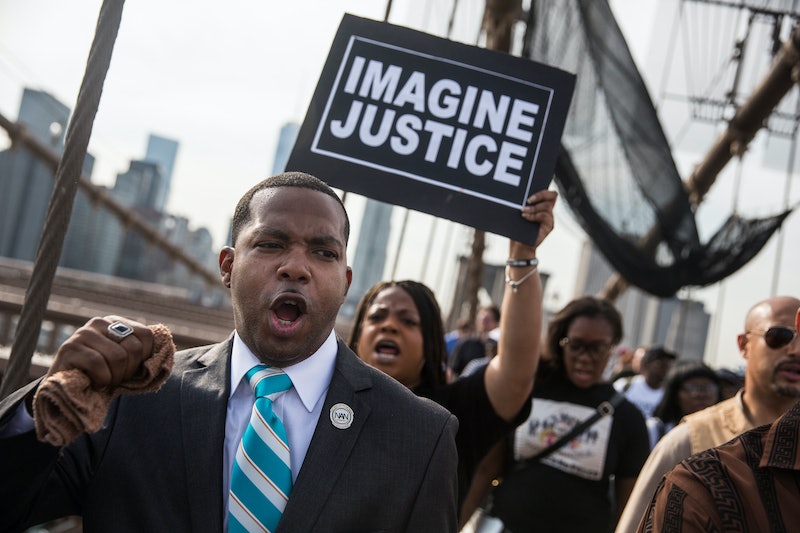 Awareness is spreading, thousands of Americans are demanding answers, and a few presidential candidates are finally demanding justice for Sandra Bland. As news spread of Bland's alleged suicide in her cell at Waller County Jail in Hempstead, Texas, hashtags and social media movements popped up overnight. By making Bland's story go viral, internet activists are making it impossible for Americans to ignore the situation, including politicians.

Bland was pulled over for an alleged traffic violation on July 10 and arrested for assaulting an officer. She was then found dead in her cell three days later. Though the autopsy report ruled the cause of death as suicide, Bland's friends and family believe there is more to the story than authorities are telling. In addition, many feel that Bland shouldn't have even been in the cell in the first place.

Civil rights activists and the #BlackLivesMatter movement are at the forefront of young voters' minds, and they refuse to let a potential candidate escape from tackling the tough issue of systemic and institutional racism in America. After Democratic candidates Bernie Sanders and Martin O'Malley left something to be desired in their responses to Black Lives Matter activists' questions at Netroots Nation, how politicians address police brutality and racism has become a litmus test for many voters.

The situation surrounding Bland's arrest and death, as well as the multiple hashtags and social media movements, has prompted several politicians to speak out on the issue. If having a president who believes #BlackLivesMatter is important to you, then you might want to check out some of these candidates who have expressed a desire for #JusticeForSandy.

Despite clashing with Black Lives Matter activists last week, Sanders was the first candidate to address the Bland case after the traffic stop video was released.

This video highlights once again why we need real police reform. People should not die for a minor traffic infraction. This type of police abuse has become an all-too-common occurrence for people of color and it must stop.

As he pointed out on Sunday, when Black Lives Matter activists heckled him and asked him to "say her name" (in reference to Bland), Sanders has been active in civil rights for over 50 years. He was present at Martin Luther King, Jr.'s march on Washington and was extremely active throughout his college years. However, he still didn't say Bland's name. But Sanders started a chain reaction, prompting other candidates to speak out.

On Wednesday, Clinton released a statement regarding Bland and civil rights, and it was unbelievably refreshing. She also discussed the issue of systematic racism during a campaign speech in South Carolina this week.

It’s heartbreaking to read of another death of a young woman, Sandra Bland. That’s why I think it’s essential that we all stand up and say, loudly and clearly, that yes, black lives matter. And we all have a responsibility to face these hard truths about race and justice, honestly and directly.

Like Sanders, the former Maryland governor got into some trouble during Netroots Nation when he told protestors, "Black lives matter. White lives matter. All lives matter." He later apologized for the all-inclusive addendum and also released a pretty powerful statement regarding Bland's death.

My heart breaks for Sandra Bland and her family. This is a horrible loss of life that demands a full, thorough and independent investigation of the traffic stop, the arrest and Ms. Bland's tragic death in custody.

... Sort of. Although he didn't release a statement like other candidates, during an interview with CNN, Trump was asked about the video of Bland's arrest.

When prodded further by Anderson Cooper and asked if Trump believed such targeting happens more to African-Americans, Trump's answer was less than impressive.

I hope it doesn't but, it might. And, you know, I have a great relationship with African-Americans, as you possibly have heard. I just have great respect for them and you know they like me. I like them. The answer is, it possibly does. It shouldn't and its very sad if that's the case.

So maybe it's not a scathing comment on systemic racism or a call for an investigation, but so far Trump is the only Republican candidate to address Bland's arrest at all. Considering the fact that Trump has been openly racist throughout his campaign so far, it's almost disturbing that he's the only Republican candidate willing to admit something is wrong here. Jeb Bush, on the other hand, chose to remind people during a recent speech that white lives matter too.