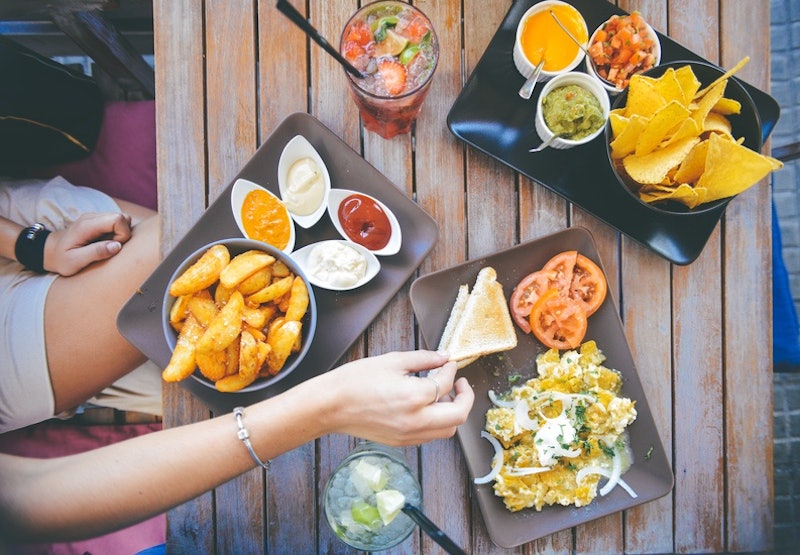 As a bona fide foodie myself, I know my way around this block. The truth about being a foodie — and a female foodie to boot— is that the two are acidic. Like oil and water on a freshly-washed kale salad, society has somehow determined that women aren't supposed to be anything more than bird-like eaters who nibble at hors d'oeuvres now and again. And yeah, the Liz Lemons and Mindy Lahiris of the world are challenging that notion and hopefully changing the foodie world for the better, but that doesn't mean that this stereotype doesn't persevere.

Let's get one thing straight right off the bat: foodies are people who love food. Often they get a bad rap, for being picky or particular or snobbish about what they eat and enjoy (you didn't have Ratatouille for dinner last night?), but it's so much more than that. We are the people who aren't afraid to love a good meal, whether it's from our mom's kitchen, our favorite diner, a five star restaurant in the next city over, or Chipotle on the commute home. But women who are passionate and unapologetic about eating (especially when doing something even vaguely in relation to everybody's favorite anxiety past-time: weight) aren't always looked upon fondly in this society. Here, all the struggles only the bleeding heart foodies will understand:

"Portions" Is A Concept Lost To You Entirely

The serving size for Oreos is two cookies. Two cookies. You often wonder whether or not there are really people out there who actually eat the serving size, and how they, you know, also function. Portion control, while important to overall health, is something that seems unrealistically limited or disproportionately out of control (you either have two Oreos or five days' worth of calories at any given chain restaurant) and that's something hard for you to balance, because you want to indulge as much as you can (as often as you can).

You're Sometimes A Little Self-Conscious Of How Much You Eat

Maybe it's just my experience, but it seems to me like some people are so fearful of what other people are think of them enjoying a good meal that they pick at it like birds. (And undoubtedly have to shove the rest of the leftovers in their faces when they get home. Right? RIGHT?) You know there's nothing to worry about (anybody who would judge you for anything like that is a jerk, anyway), and yet you can't help but hesitate to eat as much as you'd like. Sigh.

You Were Once Taught Ordering Small Is "Lady-Like"

You've really had to come into your own and realize that the insane standards that the world operates by are optional, not inherent. (Order a medium fry, you sweet angel. It's what we all want to do.)

You Get Really Obsessed With One Food, Eat It Constantly For Three Months, And Then Never Look At It Again

You're eating a truffle salted piece of avocado toast every morning and afternoon (that was a passion of mine for a while, I admit it), and then you can't even look at it for the next year. (You also probably do this with music. And sometimes people. Hey, nobody's perfect.)

Your Largest Monthly Expense Is, By A Long Shot, Food

Food you grab on your way to work, intricate lattes you grab on the way back, dinners and lunches out with people you love — the list is endless. Also, you believe that food cooked for you somehow, for whatever reason, just tastes better. And who are you to deny yourself the luxury of Chipotle? Nobody. That's who.

Your Vice Is Wanting To Try New Restaurants And Recipes Constantly

... And honestly not having the disposable income to make that an actual reality as much as you'd like to think you can.

You'll Either Eat Absolutely Anything, Or Exactly Two Things

Your palate is either an endless, infinite abyss of desire and possibility or closed except for the few things you know you like (and like passionately). Look — the truth is that you can be a passionate foodie only about a few select things as much as you can have an infinitely expanding palate. You don't have to be into obscure Taiwanese cuisine to know you're as passionate about carbs as the rest of us.

You've chosen food over people, repeatedly. If you have to mentally or emotionally get yourself through anything taxing, you just promise yourself there's a cookie or a latte or a really good dinner on the other end. You most look forward to lunch and then to dinner and then to coffee on your way to work again in the morning. You live for eating more than you do for living, and while some would say that's probably not the best thing in the world, you know it's a gift to feel so passionately about something that makes you this happy.