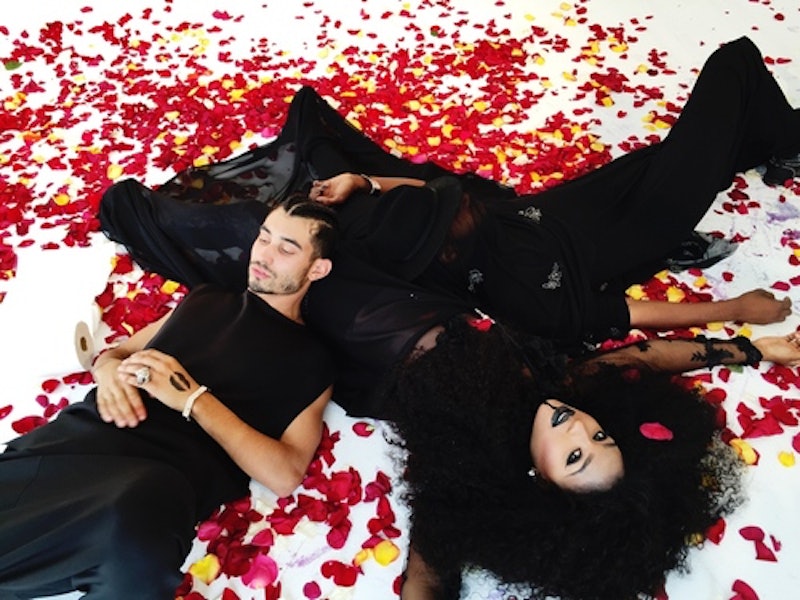 Jonn Burdine and Tyce are the brains behind The Psylence, an edgy and irreverent new fashion brand that's steeped in music and about to make its mark on street chic. The pair recruited Fifth Harmony vocalist Normani Kordei to be the face and inspo of the newly launching range, since she inspired it. Psylence's aesthetic combines clothing and music, with silence. "The Psylence stands out from other brands because it's the future of fashion and music," the duo explains to me. "It's the birth of what we like to call 'MUSION.' Creating the line felt organic."

As for the overall vibe of the clothes? The line has a very '90s, hip-hop street influence, both visually and contextually speaking, even though it's looking towards the future. Burdine and Tyce said, "The Psylence is the future so expect the unexpected... It's unconventional and sexy. Sleek and chic. If it were music, it would fall some where in between the line up of Aaliyah, Biggie, and Missy Elliot."

Those three urban music icons certainly cultivated their own unique looks, many of which are still worn by fashionable folks today. But that comparison is not meant to be literal; the pair is merely referring to the fact that there is a level of street chic cohesion in their pieces and that there is something for everyone.

Even though there is a music element, which relates to the sense of sound, silence factors into The Psylence mix, as well. It's contradictory, but that's how the best fashion trends or brands are born... by being an exercise in contrast.

"We strive to move in silence," the pair said about its fashion philosophy. "The true essence of the art should speak at all times."

Ah, so the clothes should pretty much convey all the messages and all the things that need to be said. Let's have a look at some of them.

According to Burdine and Tyce, Normani provided the inspo for the line because "she is angelic, strong, and has an infinity towards edgy things, just as we do! We are all very close, so it felt cool to pull inspiration from our sister.

The singer was the logical, natural choice for The Psylence and she is featured prominently.

Check out Normani on "The Aura" tee.

Who's loving this logo tee?

So, who, exactly is The Psylence girl? Or The Psylence boy? Well, for Burdine and Tyce, the gender lines aren't blurred — they are pretty much erased. "The Psylence has no boundaries, no race, no gender," they said. "It's the now, it's the future, and the truth told in Psylence."

That might be a little, um, esoteric and broad as a statement. Allow your eyes fall on the clothes and let the items reveal themselves visually and without words. "The Shade" tee is picture above and it's also beautiful.

Any of these tees could be paired with leather leggings, mini or pencil skirts, jeans, whatever! The pieces are super versatile and loud in the best possible way.

The shirts are a part of the pre-sale from the MOVE IN PSYLENCE now/future 2015 collection. You can shop The Psylence online.