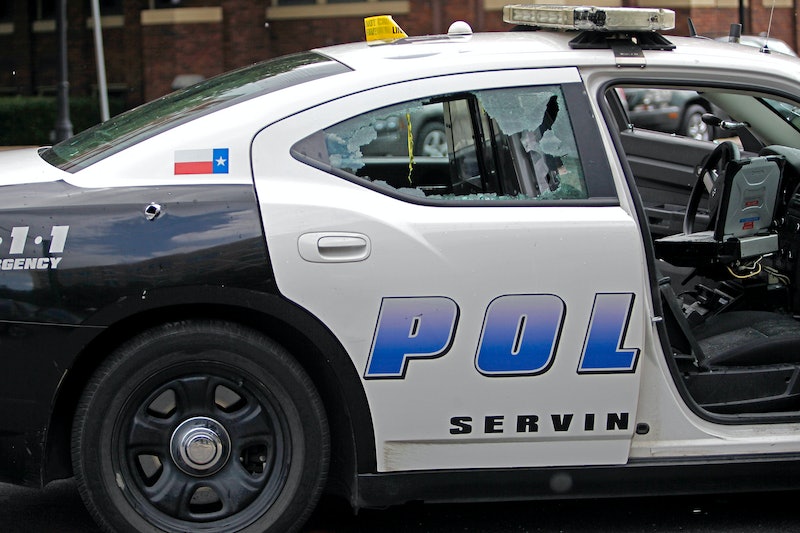 On July 10, three days before she was pronounced dead in her Waller County Jail cell, 28-year-old Sandra Bland was pulled over by Texas Trooper Brian T. Encinia for allegedly failing to signal before changing lanes. The arrest was caught on tape by a police dash cam, in which the confrontation quickly escalated. In the video, Encinia asks Bland to put out a cigarette, and when she refuses to leave her car, the officer reaches in and pulls her out by force. Experts agree that officers can ask drivers to exit out of their vehicle "under the premise of officer safety," but can a police officer pull you out of your car?

Local officials have stated Encinia is currently on administrative leave for violating department procedures and Department of Public Safety courtesy policy. However, they have not made it clear what exactly Encinia's violations entail, and if they include attempting to pull Bland out by force and then threatening to "light [her] up" with his Taser. Experts told The Los Angeles Times that the officer should not have used force on Bland to get her out of her car and should not have threatened to use his taser. But what does the law say?

Aside from the blanket "premise of officer safety" provision, a 1977 Supreme Court case that allowed Pennsylvania police officers to ask drivers out of their vehicles gives Encinia license to request Bland to step out of her car. The ruling, however, does not contain any provision for officers to reach inside a private car and attempt to pull drivers out by force. Danny Cevallos, a CNN legal analyst and a criminal defense attorney, said police could cite "safety concerns" as a reason to get any driver to exit their vehicle. Refusing to comply could then constitute as resisting arrest.

Cevallos said that "any force used to avoid a detaining grip, whether pulling away, thrashing, or just being combative" or even interactions that include no physical contact can constitute as resisting arrest. When an individual resists arrest, it is justified for officers to use reasonable force depending on the perceived level of danger of the individual, which ultimately comes down to the police officer's judgment. That definition is debatable, however, and whether or not attempting to drag someone out of their car could be considered reasonable force would be determined by the courts on a case-by-case basis.

As for Encinia demanding that Bland put out her cigarette, CNN legal analyst and criminal defense lawyer Paul Callan said Bland legally had the right to smoke in her vehicle. But Encinia also had the right to ask Bland to put it out "under the premise of officer safety." Callan, however, told CNN that he wondered how Bland smoking a cigarette "could be presented in court as a danger." After all, a Taser is much more dangerous than a cigarette, especially under the threat of lighting someone up.