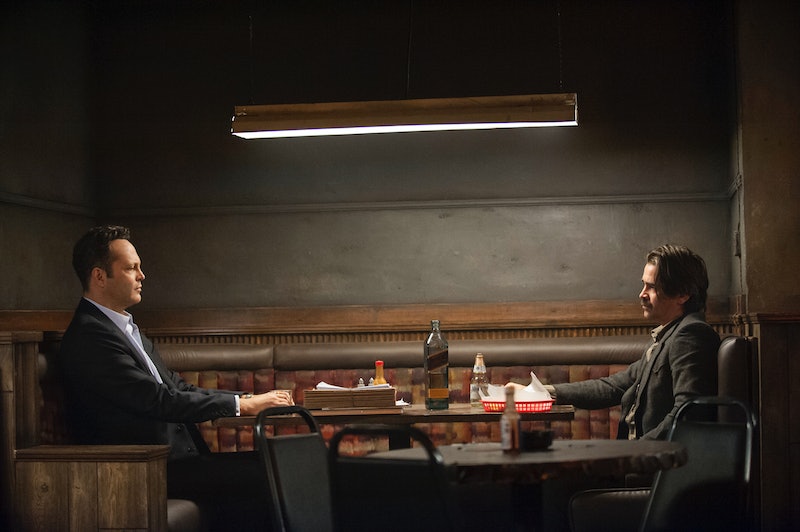 What have we learned from the first season of True Detective? We learned that even though the show has the word "detective" in the title, it's not really about finding clues and piecing together a mystery — at least not for the audience. Last time around, people went nuts poring over the tiniest details in the show, and they didn't add up to anything revealing about the plot. But while there aren't clues, per se, it doesn't mean you can't scour the episodes to find a deeper meaning. What writer Nic Pizzolatto uses more than clues is symbols. They're everywhere — just take a look at any character's name (Rustin Cohle?) for a hint about their personality. So is everything a symbol? What about Felicia, the scarred bar waitress on True Detective — is there a deeper meaning for her, too?

If you don't recall who Felicia is, she's the waitress at the bar where Ray Velcoro (Colin Farrell) and Frank Semyon (Vince Vaughn) regularly meet up. Played by Yara Martinez (Luisa from Jane the Virgin), Felicia definitely seems to have a soft spot for Ray, though it's unclear exactly why. Here, some things about Felicia that may (or may not — you never know with True Detective) be meaningful.

With every True Detective character, you have to start with the name. "Rustin Cohle" evoked decaying organic matter, Marty "Hart" had perhaps too much love (and cheated on his wife a whole bunch), etc. According to nameberry.com, Felicia means "lucky." Oh boy, is that a loaded word in True Detective land. In any case, I see her name as a kind of hint that sometimes, things are coincidental. We'd like to think that everything in True Detective is going to add up neatly based on the clues laid out for us, but sometimes things just come down to luck.

This is an easy one: Everyone on True Detective is scarred in some way. Velcoro has the whole murder-to-avenge-the-assault-on-his-wife thing, Semyon has scars from his time locked in the basement with the rats, Woodrugh has the whole Black Mountain thing, Ani Bezzerides has her time at the cult/commune, and Jordan Semyon has physical scars that make it hard for her to conceive. The list goes on. Felicia's scars are just on the outside, a visual reminder of everyone's inner turmoil.

Her Place of Employment

What is up with the Black Rose bar? Is that not the scariest place on Earth? Between the moody darkness and the solemn bar singer who always seems to be there, it's got this whole dreamlike David Lynchian vibe that I would not be into if I wanted to relax with an after-work drink. Still, I think the place itself has meaning: When Velcoro is shot, he thinks he's in the bar (watching a different, more Conway Twitty-like singer). I think it represents the darkest corners of his mind/soul. In his best moments, he tries to fight the bar (and stop drinking), and in his darkest moments, he's there full-force. Felicia, who's always warm to Velcoro, is the soothing, comforting part of the mind that tells you that things will be OK (even if they're not).

Her Feelings for Velcoro

I'm not sure how deep Felicia and Ray's relationship actually runs. I can't tell if they're engaged in some kind of friendly flirting for tips, or if there are some real feelings there. Still, I think Felicia represents a kind of path-not-taken opportunity for Velcoro. She does mention once that she wants to show him her home country. He could take her up on it and put everything behind him if he wants, the cop stuff and the collections and the paternity suit. Then again, her scars show that you can never really outrun your past, so the opportunity is more of a fantasy than anything else.

Her Stand Against Type

Fun, flirty cocktail waitresses who take a shine to the main character are kind of a trope in movies. Felicia kind of twists that trope on its head: Instead of being a lighthearted comfort like these characters usually are, she's almost unsettling even though her role in the story is very similar. I think this just might be Pizzolatto's way of saying to critics of the first season that he will populate True Detective Season 2 with female characters, but not in a way that people expect.

Her Association With Death

I don't know why Felicia, in particular, would be Velcoro's personal Angel of Death, but the subject seems to come up a lot when they're together. He mind-travels to her bar after he's shot, making it kind of a purgatory for him. Another time, when she sweetly asks him to come away with her, he responds in a typically Velcoro way: "The only way I get a vacation is if I croak." Another time, she asks Semyon about what happened to Velcoro, he responds in a typically Frank way: "Somebody murdered him." Whether this is foreshadowing or plain old True Detective pessimism remains to be seen, but Felicia certainly seems to bring out the morbid thoughts in people.

More like this
Kaley Cuoco & Tom Pelphrey Just Made Their First Public Appearance As A Couple
By Hugh McIntyre
The 'This Is Us' Finale Featured An Adorable Season 1 Jack & Rebecca Easter Egg
By Grace Wehniainen
'Ghost In The Shell: SAC_2045' Was Only Supposed To Last Two Seasons
By Kadin Burnett
What’s New On Netflix: 'Stranger Things' & 'Somebody Feed Phil' Return
By Arya Roshanian
Get Even More From Bustle — Sign Up For The Newsletter