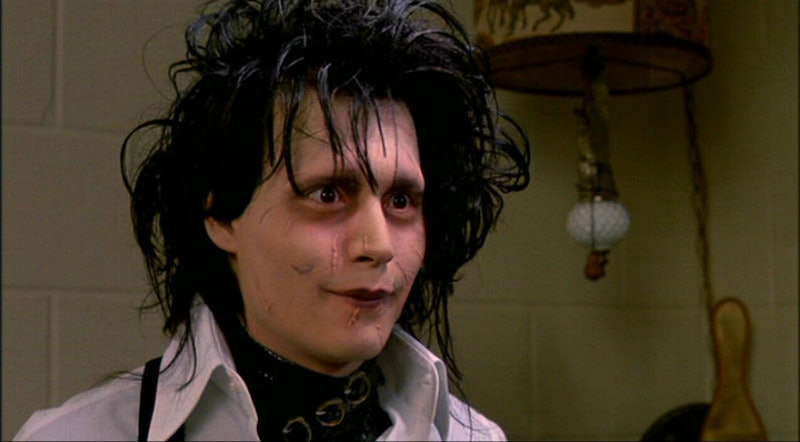 Wanna hear a secret? When I stumbled upon images of Johnny Depp in the upcoming film Black Mass , I was shaken to the core because of one reason: that hair. Depp plays crime leader Whitey Bulger, FYI, but the only thing criminal is that slicked back platinum 'do with a forehead that goes on for miiiiiles. Which made me realize something. No matter how different his characters are, they share one thing in common: they all have ridiculous hair.

Or OK, like 95 percent of them have ridiculous hair. Whether it's because of his penchant for eccentric characters or because of the circumstances of the era it was set or made in, no Depp movie is complete without an outrageous look. And while we all have our favorite Depp character, it's hard to take a step back and consider, objectively, which one of them has the most ridiculous hair.

Thankfully I am a pop culture professional and more than up to the task. After a solid decade of following the (rise and fall) of Depp's filmography, I've collected 14 characters with the craziest hair styles.

That stray strand of hair may grind your gears, and I don't know if this coif would go over today if you weren't in a rockabilly band. However, Cry-Baby's hair is otherwise unremarkable because of context: we know this is what all movie greasers look like, and to be honest, it's hardly the weirdest thing in that movie.

You get sort of a more pirate-y Fabio vibe in certain scenes, but otherwise this just falls short of earnestly swoon worthy.

12. Sam From Benny and Joon

If we were talking about headgear, this would be a completely different story, but it's actually ranked pretty low since love Depp's hair here. Wonderful length, nice side part, gently tousled without being disgusting, he looks like the Mayor of Babe City. I'm still including this on the list though, because I'm someone who lives in Brooklyn and am therefore accustomed, nay, revel in manic pixie dream boys of this ilk.

Um, yeah. Unlike Crybaby's 'do, which relies on pastiche to keep it from being laughable, this just did not age well. The '80s were hard for everyone.

You'd think that given all the fuss over Sam's hair I'd be pro-Gilbert Grape but... no. The color is off, it comes across a bit lank, and it's really the I've-given-up-on-life hairstyle of someone stuck in a dead-end town.

He just desperately needs a roots touch-up, and that's all there is to it.

There's nothing truly outrageous about this hairstyle, to be fair. But like the movie itself, it just makes you feel gross.

On paper, the idea of Depp as a vampire seems absolutely delicious. In actuality, Barnabas Collins' hair makes him look like Gomez Addams' least appealing second cousin... or the second most unpopular goth kid in middle school.

6. The Wolf From Into the Woods

The hairstyle itself isn't what lands this the number six spot, it's the sheer fact that a wolf has a hairstyle... and a hat... and a zoot suit.

The streak and the mutton chops make it bizarre, without question. But honestly, for a mass murderer, I think it's relatively well maintained.

4. The Mad Hatter From Alice in Wonderland

Let me be perfectly clear on this one: by all rights, that concoction of tangerine fluff should nab the number one spot. It is, respectably, bonkers. The reason it falls short, though, is because... well, it's the Mad Hatter. It would be crazy to not put him with over-the-top hair, and therefore it loses some of its shock value.

3. Willy Wonka From Charlie and the Chocolate Factory

God, if there's anything that'll give you nightmares in the Charlie and the Chocolate Factory remake, it's seeing Depp with a bob cut. It's a look so stark and daunting it makes Gene Wilder look like a sex god.

So much pure love for the Edward Scissorhands bird nest hair. It has literal tendrils uniting together for the perfect oddball style, and how would you even recognize Edward Scissorhands without it (besides, um, the scissor hands). Edward remains my favorite Depp character, but at the end of the day, you have to basically acknowledge that this is still just Robert Smith's hairstyle... and Siouxsie Sioux's hairstyle... and, let's face facts, Tim Burton's hairstyle.

1. Captain Jack Sparrow From The Pirates of the Caribbean Series

It's not that dreads on their own are spectacularly odd (or at least they shouldn't be) but there are dreads, and then there's... this. Captain Jack's hair is nothing short of iconic and the very symbol of his rebellious spirit. Laden with beads, coins, small animals probably, and complemented by that beard, it is the ultimate in bizarro Depp hair styles. We are all better people because Captain Jack's hair exists. Bless it. God bless it.