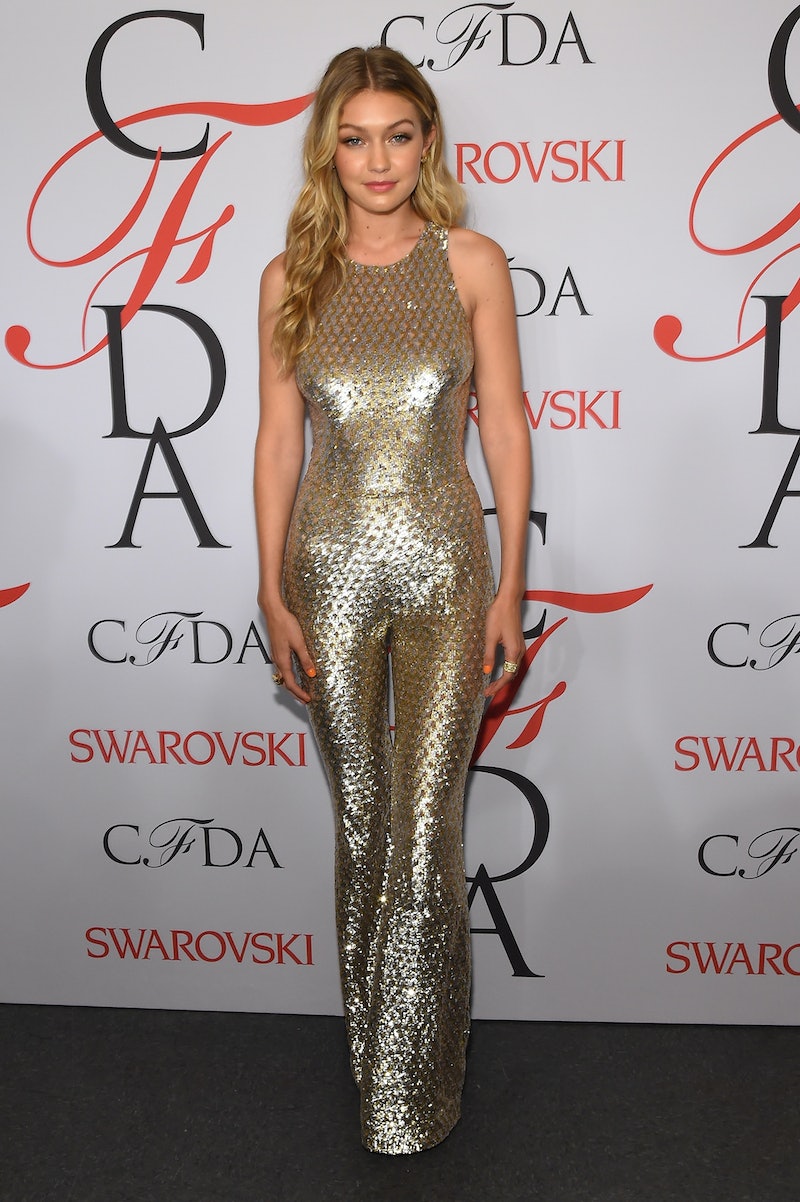 Well, it's pretty official, guys. Gigi Hadid wore a "G.I." T-shirt Wednesday, demonstrating her approval for the nickname G.I. Joe, as she hit the streets alongside her new beau. Obviously, our favorite model of the year is in favor of the new couple's official 'ship name, so now we will just have to wait for Jonas' stamp of approval. Perhaps by debuting a matching tee to complete the phrase in the near future? G.I. just wouldn't be the same without its Joe, after all.

I tend to think relationship code names are overly cheese-tastic, perhaps because I'm bitter. Combos of Julia and Mark don't exactly have the same ring to them as celebrity 'ship names like Spencer Pratt and Heidi Montag's "Speidi" or the epic infusion of Kim Kardashian and Kanye West's "Kimye." G.I. Joe is looking to be my all-time fave though. I applaud Cara Delevingne's genius play on words.

I'm willing to bet it's only a matter of time before we see Hadid's tee in mass production. Not only has the couple become one of Hollywood's hottest in a matter of weeks, but Hadid quite literally just made them a fashion statement. Am I the only one crossing my fingers for a G.I. Joe couple–theme Halloween costume this year?

Hadid and Jonas have clearly embraced their fantastic G.I. Joe moniker, and while this is probably all the proof we need that Hadid and ex Cody Simpson are officially donezo, I'm excited to see where this celebrity relationship leads in terms of G.I. fashion.

Check out five other celebrity relationship names that you can wear on your chest.

Sadly, these two beautiful people split earlier this summer (all the sobs), but we will never forget the era of Bennifer 2.0.

The coming together of these two celebrities not only brought us one of Hollywood's best monikers to date, but also one of my favorite couples. I truly believe that the reality television personality and rapper turned designer have brought out the best in one another, and we're bound to see only great things from here on out. Team Kimye, for sheezy, my Yeezy!

The Laguna Beach couple you love to hate and hate to love are somehow still together after eight years, which is a pretty big deal in Hollywood. Even though I wouldn't exactly consider either one of them heroic (Team LC for life), the 'ship name inspired by the Amazing Spiderman is pretty catchy.

You don't necessarily have to be in a romantic partnership to coin a creative duo nickname. These two are Hollywood's ultimate besties, so much in fact that they were assigned their own 'ship name, CaKe.

I will never be able to forgive Angelina and Brad for the heartache they caused my girl Jennifer Aniston, but I guess I can't deny their Hollywood power couple status. You win this round, Brangelina.

More like this
Gigi Hadid’s Dad Shared What He Knows About Those Leonardo DiCaprio Rumors
By Brad Witter
These Are The Best Socks A Woman Can Buy
By Lisa Fogarty
The 2022 Emmys' Top Nail Trends
By Olivia Rose Ferreiro
How To Wear A Bucket Hat Like Rihanna, Dua Lipa, & More
By Allie Fasanella
Get Even More From Bustle — Sign Up For The Newsletter