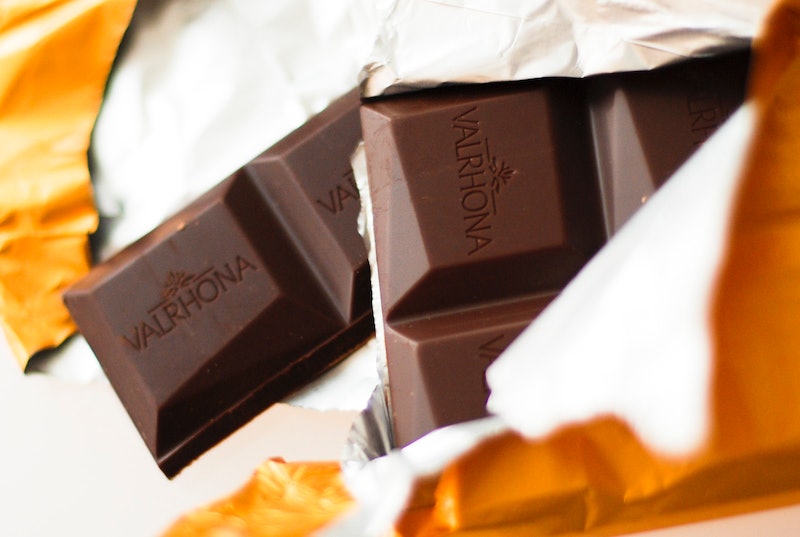 It's no secret that we really love our chocolate in the United States. Milk chocolate, white chocolate, dark chocolate, chocolate truffles, chocolate with nuts, chocolate with fruit, chocolate-covered strawberries, chocolate curls — you name it, we love it. As such, it's not really surprising that we eat more chocolate in the U.S. than all of the countries that make up Asia Pacific combined...although it's kind of mind-blowing when you consider the difference in population size: The United States' 321 million inhabitants eat more chocolate than the 1.5 billion inhabitants of Asia Pacific. Much of this has to do with palates in Asian countries, where sweets of choice aren't usually full of chocolate; it might also have something to do with the climate required for chocolate production and storage, which countries known for hot and humid weather have trouble maintaining. Regardless as to why we're eating so much chocolate in comparison, though, there's a problem: The world's chocolate supply isn't inexhaustible — and indeed, the end might be approaching a lot sooner than we think.

Despite the outstanding numbers, which CNBC reports came from Euromonitor's June data, Americans aren't actually world leaders in chocolate consumption. According to Euromonitor, the Swiss, who live in the home of Lindt and Toblerone, eat more than 20 pounds each of chocolate a year; Germans and Austrians followed closely behind, clocking in at about 17.5 pounds of the sweet stuff. In fact, people from the U.S. actually rank 20th in the world. Even though we eat a lot of chocolate compared to Asia Pacific, we eat under 10 pounds per person every year (which is an average, of course, because I know I eat way more than that).

But all good things must come to an end — or at least, threaten to come to an end. A global chocolate shortage is a thing that's happening, and it's happening for a few sad reasons. The first is that we can't actually produce the amount of chocolate we consume. It is estimated that by the year 2020 the world will be consuming 2 million metric tons more chocolate that can be produced.

The second reason for this tragedy has to do with environmental factors and climate change: With temperatures rising all over the globe, cocoa farmers are incredibly low on water to grow the crop. The crops are also affected by specific fungal diseases that have the ability to wipe out thousands of pounds of the plant at the same time in places that are known to be major chocolate producers like Brazil and Costa Rica.

Another reality of the matter, in addition to consumption and climate change, is that younger generations no longer want to be cocoa farmers because it isn't lucrative and generally perpetuates poverty for the farmers and their families who aren't making money off the crop.

Unless we make some major changes in the cocoa industry, start taking environmental issues significantly more seriously, and maybe toning it down on the gratuitous consumption of the sweet treat, chocolate will be in big trouble.

More like this
25 Quotes About Love To Share During Pride Month 2022
By Madeleine Aggeler and Emma Garza
Starbucks’ Chocolate Cream Cold Brew Tastes Like This Retro Candy
By Emma Garza
How To See The Lunar Eclipse On May 15-16, 2022
By Kaitlyn Wylde
Meet The Spice Company Founder Who Sees Chai As A Metaphor
By Madhuri Sathish-Van Atta
Get Even More From Bustle — Sign Up For The Newsletter