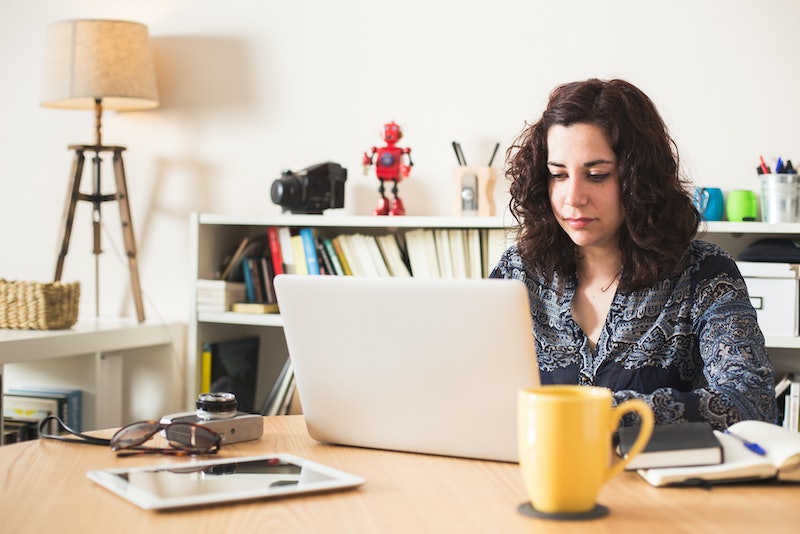 We've all been there before: It's a weeknight and while your partner is totally in the mood to do the dirty, you'd much rather get cozy on the couch with the most recent episode of The Bachelorette on DVR. I caught up with Dr. Jane Greer, New York-based marriage and sex therapist and author of What About Me? Stop Selfishness From Ruining Your Relationship, to talk about sex drive and five factors and everyday habits in our routines that could be totally sabotaging your sex drive. It's natural to not be in the mood every now and then, but if you have no or low sex drive all the time, then it might be time to try to get to the root of the problem.

"If you notice that you have been more amorous, have more desire, and have wanted to have sex more and suddenly you're noticing a dip, your antennae should go up and you should be questioning what's going on," says Greer in a phone interview with Bustle. "It could be health related, your hormones could be off balance, you could be more stressed than you realize from work or personal. You may need to support that with exercise, acupuncture or therapy."

While sometimes there are medical reasons behind low sex drive, often times the basis of your lack of interest in sexytimes might just be from everyday habits that are bringing your drive way down. When you first think about that desire to watch The Bachelorette instead of having sex with your partner, you may blame your lack of sex drive purely on your craving for reality television. However, have you ever wondered what's really hindering your libido?

Having dessert or that extra snack in the afternoon can drain your energy and make you feel heavy and sluggish when it comes time for sex. Cut back on the amount of large meals and sweets you’re having, suggests Greer. According to U.S. News, foods high in saturated fat are linked to both depression and dementia and large meals that are high in fat can make you feel "instantly sluggish."

2. Bringing Your Work Home From The Office

Think of your work day ending when you walk out of the office. Greer suggests leaving yourself some time at night for relaxing and connecting intimately.

"This [also] drains your battery and makes you wake up still exhausted," says Greer. "Unplug from the computer and household tasks. [Make sure to] set a time to be finished with activities and focus instead on spending time with your partner."

3. Getting Too Much Done Too Late

Going to bed later after completing lingering day’s tasks leaves little room for hanky panky in the bedroom. In fact, finishing up work right up until your head hits the pillow drains your battery and makes you wake up still exhausted, according to Greer.

And did I mention staring at computer screens pre-bed is one of many factors that can wreck your sleep quality? Make a point to unplug from the computer and household tasks, and then set a time to be finished with to-dos and focus instead on spending time with your partner.

And now, we’re not just talking about debates over who would make a better Bachelor in Paradise contestant. If you’re always arguing or fighting with your partner, this can lower your sex drive and make you less inclined to be intimate with them. Understand and respect the differences between you and your partner and learn to problem-solve your disagreements.

"Sometimes arguing can increase desire," says Greer. "But, that said, arguing can lead to silent, withdrawn, or retaliatory behavior. You could start forgetting to do things that are important for your partner, none of which are helpful for your relationship."

5. Having The Same Sex All The Time

Don’t allow sex to become monotonous or dull. Instead, explore new positions (like these five best positions for the female orgasm) and locations to keep both partners excited and ready for more.