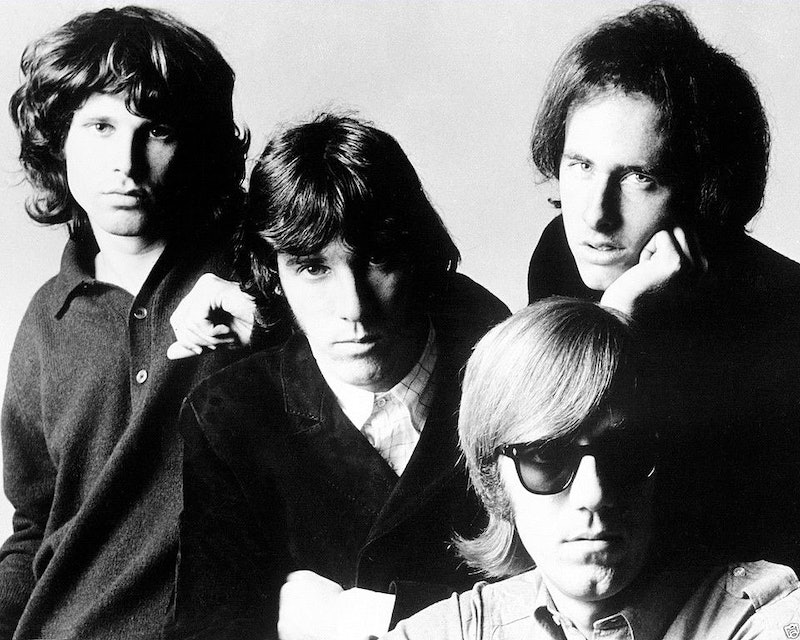 I remember the first time I heard of The Doors. It was from Jack Black in School of Rock, when he teaches the adorably nerdy Lawrence how to play "Touch Me" on the keyboards. I was hooked by the iconic techno sound — initially drawn in my the music, I truly became a Doors fan because of the lyrics. But beyond that, there are few bands that occupy as interesting a place in rock history as The Doors.

The tragic death of the charismatic, young lead singer and writer Jim Morrison in 1971 was a shock to the rock music community — but, even long after his death, Morrison's lyrics have proved to be quite the enigma. This is evident even with the name of the band: According to The Guardian, the band was very interested by literature and poetry, naming themselves after Aldous Huxley's The Doors of Perception, which itself was inspired by a quote from renowned poet William Blake:

If the doors of perception were cleansed every thing would appear to man as it is, infinite.

Just as Bob Dylan had elevated the art of writing lyrics for folk music, Morrison is the guy who heightened the intellectual and emotional meaning behind rock music in the '60s. As the band keyboardist Ray Manzarek said in a 2006 interview, according to the Rock & Roll Hall Of Fame, “Jim Morrison was a great young American poet working in the genre of rock and roll.”

The poetry and power of Morrison's lyrics resonate even more so now, just over 44 years after his death, and it's mainly because they were overwhelmingly before their time. Coupling beautiful poetry with solid chords, infectious melodies, and beautiful prose, Morrison's lyrics are still relatable, even today, with their insights into fear of dying and the social isolation that seems to define a society addicted to social media.

Need more proof? Here are some of Morrison's most powerful lyrics seem to be before their time, by eerily predicting his early death or reflect a social isolation that has gotten worse in our age of technology.

From "People Are Strange"

This song aptly describes the loneliness of being undesired, and how it can warp your perception of yourself and others. This lyric seems to define our age of social media — where loneliness is heightened by constantly comparing ourselves to others, feeling inadequate on Facebook and Instagram, having direct access to photos of all the parties we weren't at and the events we weren't invited to. But Jim Morrison didn't have Facebook.

"For the music is your special friend / Dance on fire as it intends / Music is your only friend / Until the end."

From "When The Music's Over"

This lyric is eerily prescient in light of Morrison's death, which still remains a mystery. To this day, people theorize drug abuse and even murder ended Morrison's life — but one thing that is known for sure is that he was with his music until the end. It seems eerily prescient to hear knowing that he died so young, and at the height of his musical fame.

This also resonates with the sad circumstances surrounding Morrison's early death, which happened when he was just 27 years old. This lyric is morbidly accepting of death.

"When the true kings murderers / Are allowed to roam free / A thousand magicians arise in the land / Where are the feast we are promised?"

From "An American Prayer"

This song, written by Morrison, was released after his death. It is a melancholy song that reflects on the loss of childhood innocence, and asks if there is something to look forward to in the world to come. It is sad to think that he got there so soon.

From "Been Down So Long"

This song is about needing to be saved, and seeking a savior — though, in actuality, only we can save ourselves. This insight into loneliness seems out of place in the sixties, a time of communes and community, but perfectly reflects our sense of alienation today.

"The future's uncertain / And the end is always near."

Life is short, and any day can be our last. It is always devastating to read somebody who died so young and unexpectedly's perspective on death, particularly because the "Carpe Diem" attitude contibutes to the irresponsible "rock and roll" lifestyle, which tragically lead him to his death.

Morrison's lyrics were not only some of the most powerful in rock history, but also some of the most relevant decades after their release. Not since then as a band quite measured up to the legacy Morrison and The Doors left behind — and, though I may be biased, I'm not sure anyone ever could.