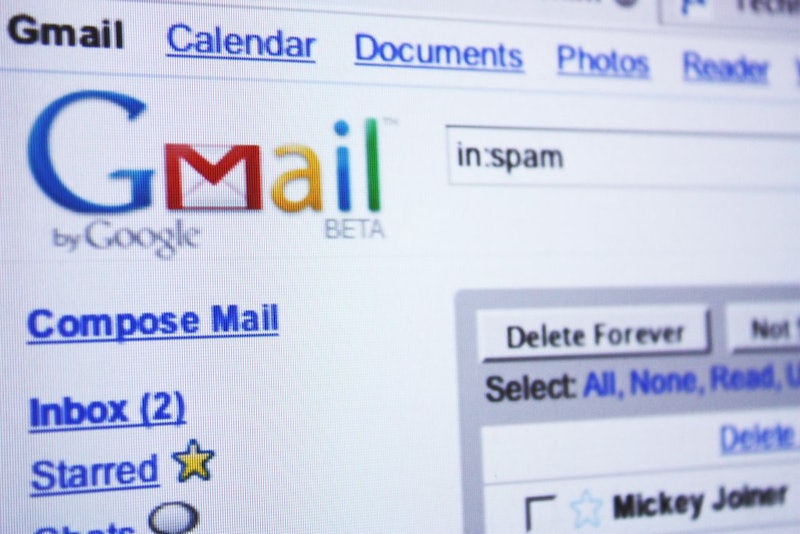 Have you ever wished you could press the Cntrl-Z keyboard combination during activities other than typing Microsoft Word documents? Unfortunately, there's still no way to take back any embarrassing information you blurt out during an awkward silence on a date, but if your problem is poor impulse control when it comes to sending emails, technology has come to the rescue. The new, slightly uncreatively named Google Chrome extension Dmail lets you time your emails to self-destruct in advance or destroy them retroactively so that nobody ends up reading emails that you regret sending.

Here's how it works: When you type an email, Dmail lets you designate a period of time — an hour, a day, a week, or never — when you'd like your email to self-destruct. After the allotted time period, the email is wiped from the sender's and receiver's inboxes. This ability may come in handy if you're sending financial or otherwise secure information over Gmail — but for the good-old hastily written or unwisely sent email, Dmail also lets you revoke your email at any point after sending it (though if someone has opened it first, the damage is done). Soon, Dmail will release a feature that lets you prevent emails from being forwarded, in case you're concerned about gossippy contacts. How's that for peace of mind?

The best part? Dmail isn't the only software of its sort. If you have a habit of drunk texting, own a cat who frequently steps on your keyboard, accidentally hit "reply all" on office-wide threads all the time, or are a fan of therapeutic letters-to-never-send that you accidentally end up sending, technology has come to the rescue. Here are a few more apps and features for taking back time, though the best way to ensure that the wrong messages don't reach the wrong people is to think before you send them.

The easiest way to take back your emails is to enable Gmail's "undo send" feature. You can update your Gmail settings by clicking the cogwheel on the upper-right-hand corner of your inbox, check "Enable Undo Send," and set the number of seconds before the undo option disappears to 5, 10, 20, or 30 seconds (unless you need your emails to send very speedily, I'd recommend 30!). The only downside is that you lose control over your email's destiny after those seconds pass.

Be Labs's iOS app Strings is basically the Dmail for texting, providing the option to delete a text from the recipient's phone as well as your own after you send it. Strings also makes sure your contacts don't download anything you send them over text without your permission.

On Second Thought is similar to Strings but works on Android. It lets you revoke a message while it's still being delivered so that it never reaches an unintended recipient's phone; additionally, it has a "curfew" feature that suspends your texts for a designated period of time so you can decide whether to send them when you're in a sounder state of mind after a night out or an emotionally vulnerable period (show of hands for everyone who has regretted sending a post-breakup text).

In case you haven't jumped on the Gmail bandwagon, Unsend.it works with several different email providers. However, it doesn't delete your emails entirely — it just converts your text into image files that can be removed from the emails that contain them. So, recipients will still have mysterious emails in their inboxes that don't contain anything. Better than everything going through, though.

Despite all these options, as people pointed out when Snapchat came out, your contacts can always take screenshots of what you send them if it reaches them before you get a chance to delete it. Oh, and lest you forget, people can read your texts and emails before you revoke them. So maybe you're better off just refraining from saying things you don't want to say in the first place. It's good practice for real life — because there's no app for actual time travel yet.