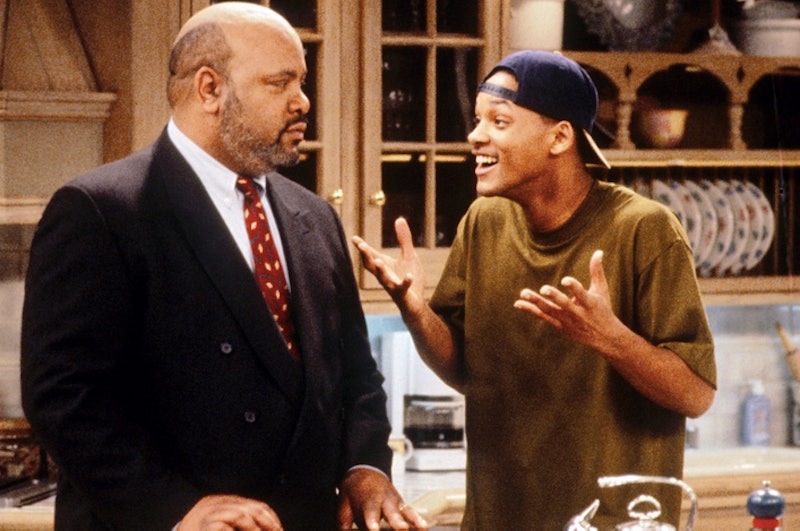 Sometimes, we experience situations in life, in which words aren't enough to convey the true devastation that comes along for the ride. I'm talking about a stolen parking spot, a dropped ice cream cone, a television show being canceled — you know, the things that really matter. Language is so limiting, but that’s why we’ve got our incredibly expressive mugs to do some of the talking for us. You might not always say what you're thinking, but there's a good chance your face shows it. Take it from the Fresh Prince of Bel-Air cast, whose epic overreactions still serve us to this day. Bless their hilarious souls.

No one knows how to do over-the-top better than Will Smith himself, and his Fresh Prince co-stars weren’t too far behind. The show constantly delighted fans by breaking the fourth wall and using super dramatic reactions to show the absurdity of how we, like Will, sometimes make a huge deal out of nothing. Let’s admit it, we’re all exaggerators in one way or another and the Fresh Prince totally got that.

In honor Smith and crew’s memorable overreactions, here are 11 Fresh Prince of Bel-Air GIFs for life’s most “tragic” situations:

1. When Your Favorite Show Doesn't Get Renewed... Or Uploaded To The Internet

You can send your cable company the ambulance bill.

2. When Your Friend Serves You An Especially Hard Truth

3. When The People In Your Friend Group Start Getting Engaged

Because no one wants to go out anymore. Or like, even stay awake past 9:30 p.m.

4. When You Get Sick On A Romantic Vacay With Your Significant Other

5. When You Get Taken Down By A Wave And Accidentally Flash The Entire Beach

Though, I suppose that's what you get for challenging mother nature with a boogie board.

6. When You Make An Announcement On Social Media That Anyone Who Doesn't Like What You Post Can Unfollow You... And Then They Do

But like you didn't mean it, mean it. Gosh.

7. When You Can't Think Of A Good Insult After You've Been Properly Served

8. When You Want To Make Guacamole, But You Let The Avocado Sit For Too Long And It's Over Ripe

Why is every beautiful aspect of life so fleeting?

9. When Your Mom Sneaks Peas Into Your Pasta

ABP, Mom. Anything but peas.

10. When You Tell A Joke And Nobody Laughs And You Need An Immediate Distraction To Lessen Your Humiliation

11. When You Get Home From The Nail Salon And Notice Your Manicure Is Chipped

IS THERE ANYTHING WORSE?

Thanks, Fresh Prince. How would we ever get through mundane catastrophes without you?