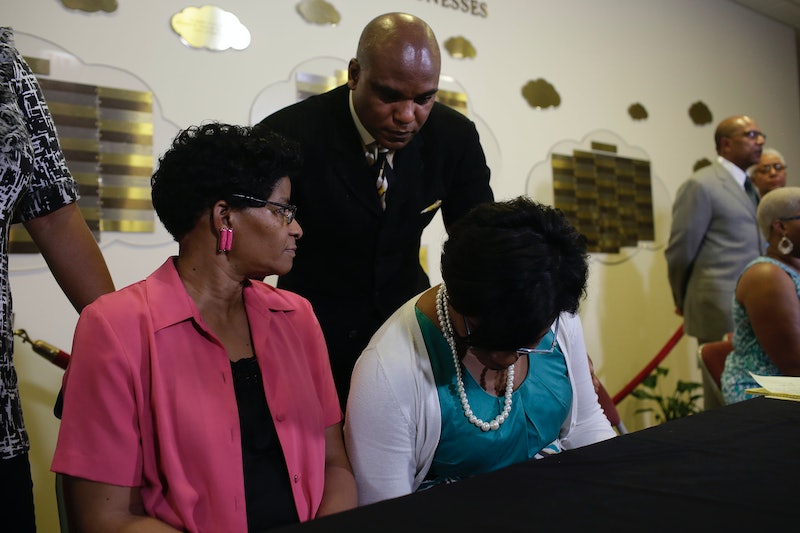 Officials in the case of 28-year-old Sandra Bland, who was arrested during a simple traffic stop in Waller County, Texas, and found dead in her jail cell of apparent suicide just days later, have released to the public the official autopsy report done one day after authorities discovered her body on July 13. Performed by a nearby Harris County medical examiner, the autopsy report confirmed wounds consistent with self-strangulation — the same method responding officers claimed Bland had used to end her own life. The 11-page report was comprehensive and seemed to answer any lingering questions posed by family members, friends, and supporters of the Chicago-area native who doubted officers' original claims of death by suicide. Even in its comprehensiveness, however, there were at least a few things that Bland's autopsy didn't fully explain.

During a press conference on Thursday, Waller County prosecutor Warren Diepraam suggested that the results of the examination were, for the most part, complete, with the exception of toxicology and histology reports. However, he noted, the autopsy only concluded the physical findings, not the criminal ones.

With results from Bland's toxicology report (which may indicate whether or not she had been taking medication or any other substances that may have altered her mindset on the day she died) still pending, Bland's last few days remain a looming question. And although prosecutors told reporters on Thursday that they had "complete faith" in the office conducting the examinations, there were a handful of elements in their paperwork that could potentially end up weighing much more, somewhere down the line.

Abrasions On Her Back

According to the medical examiner's report, Bland suffered a "one-inch ... faint purple contusion" and "multiple scabbed horizontal linear and irregular abrasions ranging from 1/4 inch to 1 1/2 inch" along her upper right shoulder blade region. A fragment of a leaf was stuck to the wounds as well. The findings, concluded Diepraam in his press statement on Thursday, pointed to Bland having "a force against her back" at some point. Although it was likely the healing wounds were inflicted earlier, possibly during her arrest, it's the nagging details like that little leaf that might prove important later.

If Bland had been made to change out of her clothes and into her orange top and pants, how did it cling to her scabs? Why wasn't it brushed off upon contact with the removal and dressing of two sets of shirts? Could it have adhered to her back after being booked?

A leaf fragment is, of course, a tiny thing and easy to overlook as coincidental. But with all the hustle and bustle of an arrest and subsequent lock-up, it's a reasonable question.

As Bland was a smoker, lung congestion alone may not have been so worrisome upon examination. But according to the Harris County examiner who performer Bland's autopsy, a few other vital organs had also suffered congestion as well, including her liver and kidneys. Without a complete toxicology report, it's unclear whether that congestion was a benign side effect of her suicide, an ongoing physical condition, or evidence of a harmful substance in her system (certain organophosphorus poisons can sometimes cause congestion of the organs after death) that may have caused suicidal thoughts.

If toxicology reports turn up any curious substances, the question then becomes whether Bland took them herself or whether she was given them after being booked.

Both Diepraam and the Harris County medical examiner confirmed that the ligature marks on Bland's neck (which canted upward to the back of Bland's head beneath the occipital region at the bottom of her skull) were consistent with non-violent strangulation — in layman's terms, the marks were inconsistent with a struggle between Bland another person or an assault, as her family has suggested may have been the case. Still, that doesn't rule out everything.

According to the Malignant Hyperthermia Association of the United States (MHAUS), certain drugs like Succinylcholine Dantrolene can cause paralysis of the muscles and sometimes asphyxiation. It works quickly and is broken down by the body's enzymes almost immediately, leaving very few traces behind. Succinylcholine is more commonly used in emergency responder kits and by medical professionals during intubation (placement of breathing tubes) and sometimes as a pre-cursor to anesthesia. It has also been used as the second part in a three-dose, lethal injection cocktail for death row inmates due to its ability to paralyze the system.

That's not to say that Sandra Bland was given Succinylcholine (which, though largely untraceable, leaves behind indicators in the blood plasma that it may have been there) — after all, it's just an example, not a cause, and given the confidence Diepraam and prosecutors have in the Harris County facilities, it's more likely that suicide was the official cause of death. But that doesn't mean that it's without its weak points.

The likely outcome of Bland's autopsy will be an open-and-shut final declaration of suicide, once the final toxicology reports are in. But if reading far too many Arthur Conan Doyle stories as a child has taught me anything, it's that the devil is in the details. Without question, the death of Sandra Bland was a tragic one. The only thing left to do is to search every corner for every single possible outcome, even the small, almost unbelievable ones — in a case like Bland's, it seems like the only way to do her memory any justice.