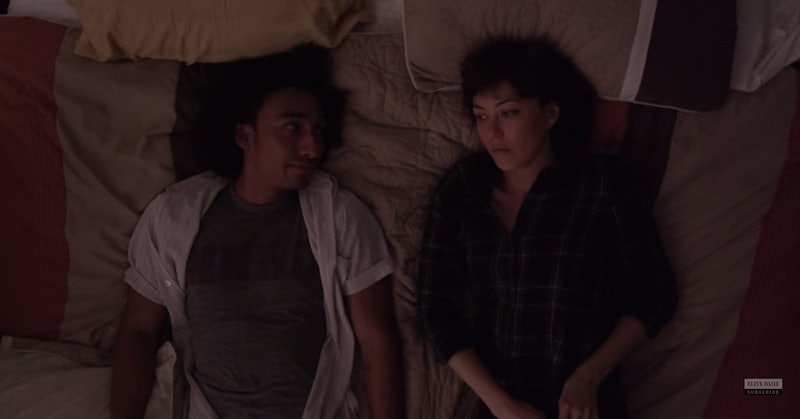 Don't even try to sit there and pretend you've never received (or sent) the dreaded 2 a.m. "U up?" text, because I know we've all been on both ends of it. Like most things we do when alcohol is involved, the late-night booty call seems like a great idea at the time, with the key words being "at the time." At least, that's what Elite Daily's new video, "Why Late-Night Booty Calls Never Go According to Plan," wants us to believe. Maybe think twice tonight before sending out that text later tonight. As Ted Mosby says, nothing good ever happens after 2 a.m.

I'll be honest, I thought this video was going to be funny, but it was... not. It was on the serious side. In the video, a girl booty calls this guy she barely knows, and it's pretty awkward. Especially when things start to get real and they talk about serious things, like when they want to have kids. In my opinion the video should not necessarily be called "Why Late-Night Booty Calls Never Go According to Plan," because that's not really what it's about, and instead be called "Why Late-Night Booty Calls May Not Be the Answer to What You're Looking For." But we'll get to that in a minute with the video.

It's kind of a missed opportunity because I think a video of the mishaps that we all encounter when trying to initiate a booty call would be really funny and relatable. If I were making that video, this is what I'd put:

1. You spend the whole time you're out stressing about timing that first text.

"Is 12:30 a.m. too early to send the initial 'Hey what ru up to later?' text? I don't want to sound too eager. But then again I don't want to send it too late, in case he falls asleep or goes home with someone else or something."

2. You can't drunk order a pizza when you get home.

Unless you're booty calling the pizza guy, you can't really wait for Domino's to deliver your pizza and scarf it all down before your booty call shows up. You made a choice, and you chose sex over pizza. Now you have to live with it.

3. You almost fall asleep waiting for your booty call to finally arrive.

While you're waiting on the couch for your hookup buddy to get their butt over to your place, your eyelids suddenly start feeling very heavy. But you chose this life, so you can't go to sleep, so you just sit there obsessively checking your phone for what feels like an eternity until you finally hear the knock on your door.

4. You both know you're going to hook up, but the moments leading up to it are painfully awkward.

The Elite Daily video got this right, at least. That tension right before the hookup, where you both know what's about to happen but you're both too scared to pull the trigger, is the worst.

5. You're never sure whether to kiss or just hug when the other person leaves.

Nobody ever knows what to do. Cue the dreaded side-hug, I guess?

Now that you know what my version of the video would be, check out the real video from Elite Daily below, and don't be afraid to booty call someone tonight if that's what you want to do.