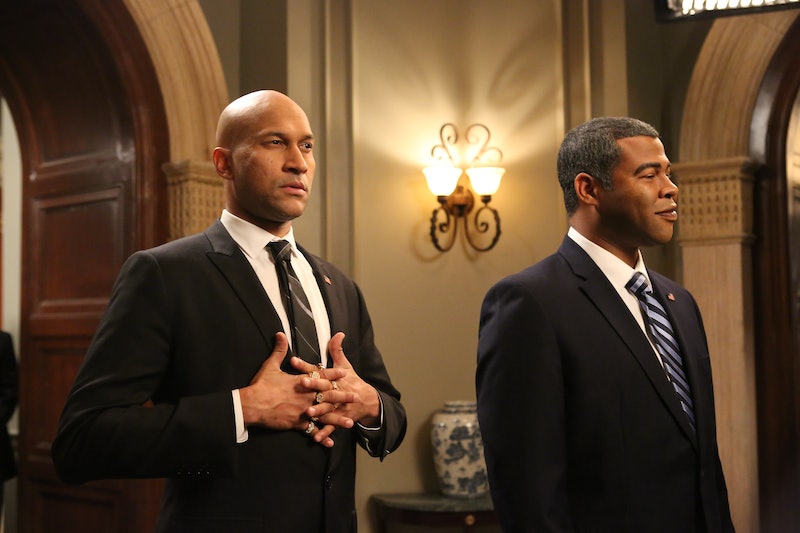 I come bearing bad news for everyone who loves smart and hilarious sketch comedy: Comedy Central's Key & Peele is ending after Season 5. I know, it's heartbreaking, and yes, I'm hurting just as much as you are — but according to Keegan-Michael Key and Jordan Peele, it was their decision to end the show now rather than have it ended for them. "It was just time for us to explore other things, together and apart," Key told The Wrap. "I compare it to Gene Wilder and Richard Pryor. We might make a movie and then do our own thing for three years and then come back and do another movie."

OK, so movies sound great and all (and the duo is set to star in their own feature film together, Keanu ) but what are we all supposed to do until then? Precious few shows offer up quite as great a mix of social commentary and hilarious absurdity as Key & Peele does. Also, consider that the show is ending after Season 5 — the season is already in progress! The final season kicked off on July 8, which means there are a finite number of episodes left (specifically, eight as of July 25) before the series finale. Commence weeping now.

While it is cool these two skilled comedians are getting so much extra work (in addition to the upcoming Keanu, they appeared jointly in FX's Fargo , Key has a recurring role on USA's Playing House, and Peele will soon be seen in Netflix's Wet Hot American Summer), not having them offer up new valet sketches is going to be rough. You can totally get through this emotional goodbye to one of your favorite shows though — here's how you can cope with the end being near.

Turn Every Last New Episode Into An Event

Gather your friends, break out the snacks, and make sure Key & Peele goes out in style. The best way to say goodbye is to treasure every last new sketch. This is the end of line — make attendance to your weekly Key & Peele viewing parties mandatory.

Rewatch All Of Your Favorite Sketches

Whether you are still not over the time the guys riffed on Game of Thrones or when they got way too real about text messages, revisit your favorite sketches and laugh. Because you know what? They never get old. (Why are they leaving us?!)

Start Scoping Out The Field For A New Fave

Might I suggest Inside Amy Schumer? Her biting satire might just be able to fill the Key & Peele-shaped hole in your heart.

Focus On The Key & Peele Feature-Length Movies In Your Future

The guys aren't breaking up, and they know they're brilliant together. Key even wants to make a new movie with his BFF every three years, and, like I said, we have Keanu to look forward to! Think of all that big screen Key & Peele goodness — this isn't goodbye, it's just see you later.

Check Out The Guys' Other Work

Key and Peele have seriously prolific careers. Fargo, Bob's Burgers, Let's Be Cops — the guys have been all over popular culture and now that they have more time to devote to other projects, their influence will be felt in an even bigger way. They may not be in every new project together, but at least you will have double the awesome entertainment to consume.

It's not going to be easy to say goodbye, but trust me — you are going to want to savor every last minute of these final episodes while you can. Key and Peele's show is legendary, and they deserve a proper farewell with popcorn, confetti, and lots of laughter. Catch the rest of season five every Wednesday at 8 p.m. ET on Comedy Central.

More like this
Twitter Got *Very* Emotional Over 'The Split’s “Perfect” Finale
By Sam Ramsden
The Time Traveler’s Wife Book Has A Heartbreaking Ending
By K.W. Colyard
Netflix Just Revealed When 'Never Have I Ever' Seasons 3 Will Premiere
By Gretchen Smail and Alyssa Lapid
'Unforgotten's Brand New Character Joins At A Pivotal Moment For S5
By Bustle UK
Get Even More From Bustle — Sign Up For The Newsletter