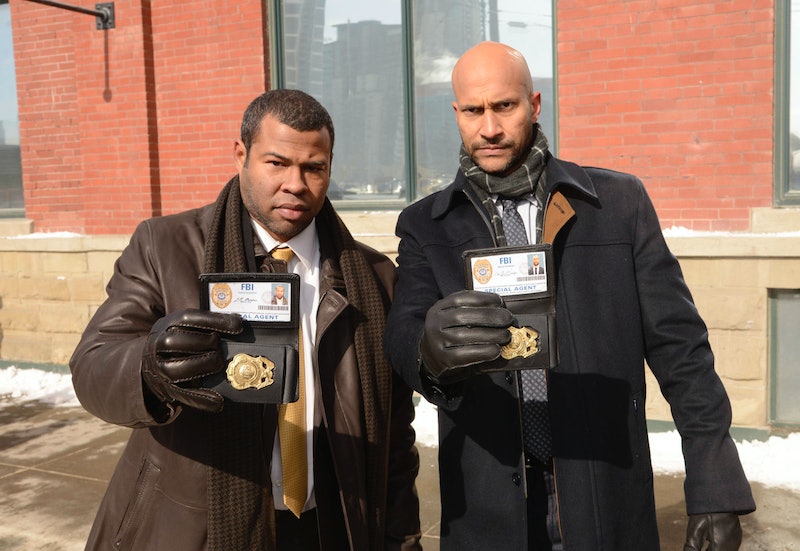 Keegan-Michael Key and Jordan Peele — better known as comedy and improv masters Key and Peele — are guest-starring on the last four episodes of FX's Fargo, starting this Tuesday. The duo will be playing a set of FBI detectives named Bill Budge and Webb Pepper, who are hot on the tail of Billy Bob Thornton's villainous Lorne Malvo, and we're pretty pumped — not only because we imagine there will be a lot of great bloopers when the DVD inevitably hits shelves someday.

For one thing, it's hard not to think they'll be kind of like Rust Cohle and Marty Hart, but, you know, funny. (Don't get me wrong, there were probably funny moments in True Detective, in between all the tension and blood and screaming, but I don't remember any of them because I was too busy being anxious.)

Or maybe they'll be more like Dean and Sam in Supernatural when they pretend to be FBI agents — they definitely gives off "old married couple who have been together way too long and can't help but bicker" vibes in the footage we've seen so far.

Either way, generally when Key and Peele are brought on for something, it's because comic relief is needed, and we're sure they'll bring the goods to a show that seems to keep getting darker and darker. Here's why:

It's Always Great To See Them Together Again

Key and Peele crop up together a good chunk of the time, but they also go solo on a lot of projects. Key, for example, is a lead on Lennon Parham and Jessica St. Clair's sitcom Playing House, while Peele has popped up on everything from Modern Family to Workaholics to Wanderlust. Still, seeing the two of them onscreen together, knowing how well they play off each other, always gives us that "Oooh this is gonna be good" feeling.

Seeing Them Interact With Fargo Regulars Should Be Interesting

Budge and Pepper will most certainly be looking down on local law enforcement like Molly and Gus because they're big-time government officials and they're small-town cops. We do know which part of the cast they interact with and without spoiling you, we can assert that they are still scene stealers, even when pitted against this incredible Fargo team of regulars.

Although MadTV was a lot like Saturday Night Live's much less famous younger sibling, many of its cast members were — and still are — undeniably talented, including Key and Peele. While a show like Fargo is very specifically scripted, no showrunners would bring in a couple comedians so well-versed in improv just to make them stick to the script like glue.