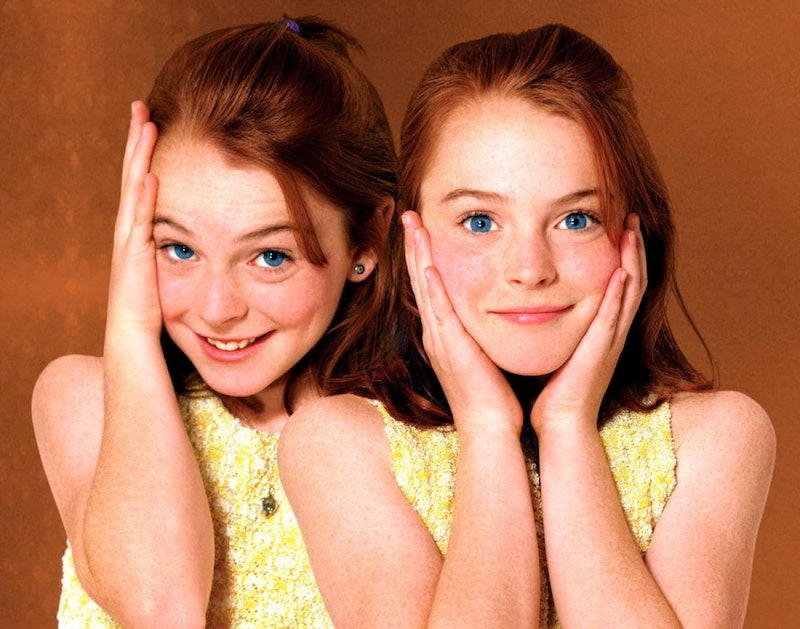 First things first: The Lindsay Lohan version of The Parent Trap is everything. It is an amazing film, and if you haven't seen it, you need to stop whatever you are doing right now and watch it. In my estimation, it’s perfect. It was great when I was a child, and is definitely not a letdown now that I'm 25 years old. This year marks the 17th anniversary of The Parent Trap. In 1998, Lindsay Lohan hit the big screen (twice) as Hallie Parker and Annie James, who meet, learn they are twins, and then scheme to get their parents back together. Foolproof plan, am I right? It’s a remake of the Hayley Mills classic, and while my mother is obsessed with the original version, I prefer the '90s iteration.

I rewatched The Parent Trap until I learned Annie and Martin’s secret handshake. But even after several viewings, there are things I had forgotten about, and references I didn't understood completely until I got older. In a time when Lindsay Lohan was still adorable — and eating an entire package of Oreos and peanut butter didn’t stand a chance against your metabolism — The Parent Trap reminded us of what we were missing in this world: a long-lost twin. No really, though, where the hell is my twin sister BFFL?

Here are 16 things I realized for the first time while watching The Parent Trap as an “adult.” (... Quotes because I am still not convinced I am one.)

I am telling you right now that no British 11-year-old is being sent to sleep-away camp in Maine. And sorry, but not even a kid from Napa would travel all the way to Maine for camp, either.

What parent dropped this boy off at an all-girls camp and peaced out before figuring out that it was an all-girls camp? Also, who allowed him to stay all summer? Where did he sleep? So many questions.

3. That Boy Is Michael Lohan

6. Who Are These Champion Poker Players? … And Fencers?

I get that kids can learn poker. But if these girls are getting royal flushes and straights, they should really be in the World Championship, making the big bucks. Plus, they are both championship fencers, apparently.

7. The Beds On The Roof Of The Cabin

I went to summer camp. There is no way that, in a cabin of 10 girls, not one of them woke up while a bunch of other girls were putting feathers on the fans, shaving cream in that one girl's hair, and water balloons in the rafters. You get what I’m saying.

This is the most important thing I took away from rewatching this film: Dennis Quaid is a total babe. He’s pretty much the sexiest dad I’ve ever seen and he makes wine. UNLIMITED WINE. It truly is a revelation.

Ha! Please. If that’s what you look like at 26, then I'm just going to go ahead and quit life.

11. Their Wedding Was 10 Weeks After Meeting

Hallie went away for eight weeks, came home, and found that her dad was getting married in two weeks. Ross Geller from Friends knew Emily longer than Nick Parker knew Meredith. Think about that.

14. In Defense Of Meredith

Yes Meredith is the absolute worst, but hear me out for a second. If I was dating a guy and his ex-wife popped up before my wedding and planned a camping trip alone with him, I’d probably be pissed, too. Also, if some brats put a lizard on my head and pushed me out onto a lake in the middle of the night, I would be out of there STAT!

Ugh. Not only is Dennis Quaid hot, but Natasha Richardson is so damn graceful and flawless in this movie. I miss her.

16. That Wine Cellar, Though