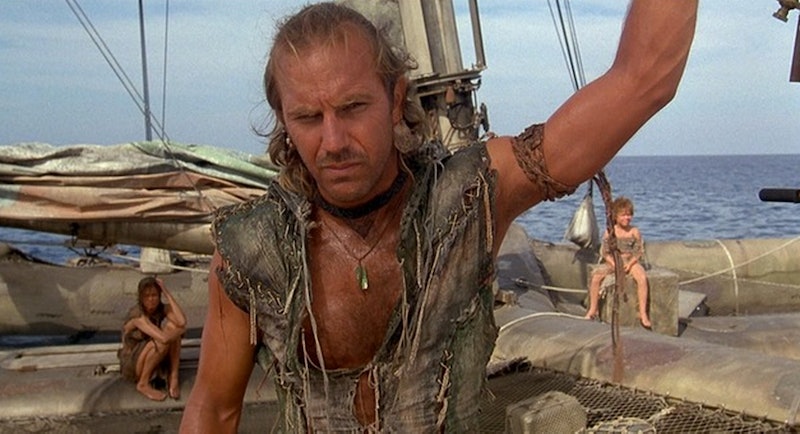 It took me two decades, but I did it. I finally did it. I finally watched Waterworld from start to finish. The post-apocalyptic flick and I have a bit of a history: The year was 1996. I was eight or nine years old. One evening, my parents picked up a copy of Waterworld at the local video rental store. Waterworld is not animated, nor does it star Jim Carrey (a human cartoon!), so I had little to no interest in checking it out. When my parents popped the tape in the VCR, I retreated to my room and listened to The Lion King soundtrack while I threw pogs at Koosh Lings and read old issues of Disney Adventures. Classic '90s kid antics!

Two hours passed. The movie has to be over by now, I thought. I headed back to the family room. I immediately regretted this decision. Not only was the movie still going strong, but it was smack dab in the middle of a scene that would lurk in the dark corners of my brain for the next twenty years of my life: The Deacon (Dennis Hopper) lifts up his eyepatch to show The Mariner (Kevin Costner) the empty pit were his eyeball used to live. I did not like what I saw. I scrammed back to my bedroom. I presumed that the nasty eye socket scene was only the tip of the melted polar icecap, er, iceberg, and I wasn't ready to find out what other gruesome horrors the movie had to offer.

Fast-forward to 2015: I was finally ready. The other afternoon, I pulled up Amazon Instant, rented Waterworld, and watched the 20-year-old movie from start to finish. The verdict? Young Kristie was right to worry; the movie is NASTY. Yeah, it’s entertaining (four words: pirates on jet skis). And yeah, it’s hilarious (four words: pirates on water skis). But it's also really, really gross (four words: dead pirate pea soup).

I dealt with the nauseating imagery the only way I know how: I drew up a list. Without further ado, here's a very necessary definitive ranking of the most disgusting things that happen in Waterworld:

#11: The Deacon spits at this man and the man thanks him.

That loogie is most certainly nasty, but this moment is more rude than gross.

#10: The Mariner puts a filthy lighter in his mouth.

In the middle of one of the movie’s many melees, a rando winds up with an impaled foot. I hope he got his tetanus shot!

#8: There are corpse marionettes.

Man. The pirates in this movie are macabre AF.

#7: The Mariner drinks his own urine.

Dude basically pees into a makeshift Brita filter and calls it drinkable water.

#6: There is a dead body pea soup compost pit.

#5: The Mariner squeezes fish monster eyeball juice into his mouth.

And then, he nonchalantly sucks on the eyeball. All of it is very upsetting. Thank Poseidon I did not watch this movie while eating dinner.

The webbed feet? Totally chill. I’m usually down with gills, too, but those freaky flaps of skin behind The Mariner’s ears could not be less chill. It looks like someone took a cheese grater to the side of his head. Barf-o-rama.

What made me cringe first: the visibly infected skin, or the presumably unsterilized marble someone wedged into the puffy eye socket? I may never know. It’s my very own chicken/egg dilemma.

NOPE. JUST AS UPSETTING AS I REMEMBERED. NOPE NOPE NOPE. STILL NOT OVER IT.

I hate it with every last fibre of my being. ...But I can't stop staring at it. *Throws tetanus-covered spear at computer monitor.*