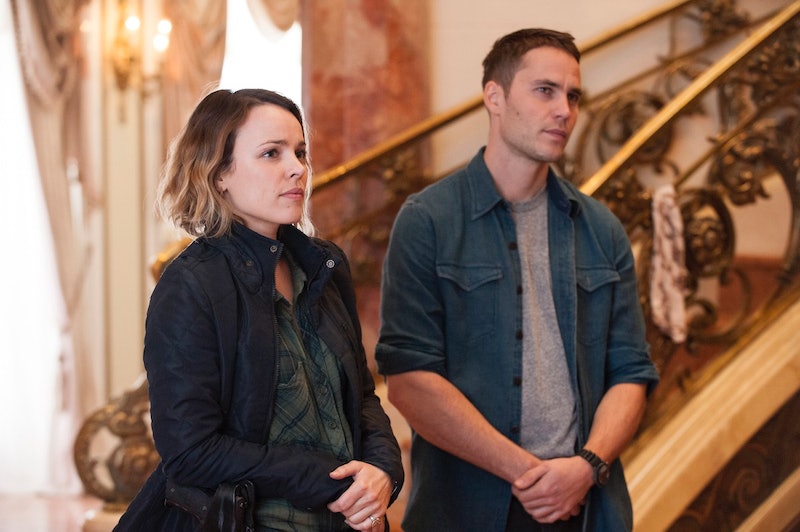 Does anyone else feel like there are still far more unanswered questions than they can keep track of right now even though HBO's True Detective Season 2 finale is fast-approaching? Although I seem to be one of approximately five people who feels this way — I prefer Season 2 over Season 1. And, by that, I mean that I eagerly await Sunday nights nowadays and spend hours shifting through True Detective Season 2 theories on Reddit with the same intensity as Ani working out, whereas with Season 1, let's just say I didn't even make it through the entire eight episodes.

Unsurprisingly, my investment in Season 2 has had its downsides — and I'm not just talking about the horrified looks people give me when I tell them how much I'm enjoying it. No, I'm referring to the hours I spend every week on Reddit, perusing theories on everything from the main characters' backstories to Ben Caspere's killer to the Birdman's true identity. It's really a rabbit hole that I can't seem to escape — though, I have to admit, I haven't really tried. (I told you I love this season!)

The plot has continued to thicken, but I really think that Ani, Ray, and Paul could use the assistance of Reddit users who have come up with some darn good theories about this mystery. There seemed to be a breakthrough at the very end of last Sunday's episode when Paul — somewhat comically — exclaimed, "These contracts! Signatures all over them!" So either a) Paul has never seen a contract before or b) the aforementioned signatures are shocking and incriminating. I really hope it's the latter, because I'm ready for some answers.

Until then, let's take a look at some of the best, most interesting theories from Reddit's finest armchair detectives:

Over the past few episodes, it has occurred to me that Jordan Semyon is getting a lot of screen time for someone who is supposedly just "the mobster's wife." And I'm not the only one. Slews of Reddit users have noticed the same thing and, although theories diverge, many people believe she knows far more than she's letting on. So, what could her role be?

Jordan has mentioned several times that she fears she’s infertile due to multiple surgeries she had in her 20s. What if her procedures were at the hands of Dr. Pitlor? HoldenGambles points out that Jordan appears to have an existing relationship with Osip and Malkin. Could Pitlor also be rendering them infertile to prevent the women from getting pregnant and therefore having DNA evidence that some of Vinci's most powerful men are attending these sex parties?

HoldenGambles goes on to theorize that Jordan is still working for Osip and is delivering him information about Frank. This would explain how Osip knew about Caspere's dealings with Frank. Even if she did ultimately end up falling in love with Frank, Osip has dirt on her that would make her fear telling her husband the truth about her past.

Although it's somewhat far-fetched, my favorite theory of all is that Jordan killed Caspere herself. We saw her holding a gun during Ray and Frank's confrontation, which could be a major clue that she's not afraid to use it. Caspere's genitals were blown off with a shotgun, therefore it's plausible that a woman victimized by the trafficking ring murdered him as a means of revenge. If Caspere threatened to expose Jordan's past to Frank, that would give her twice the motive. Plus, a female killer could be Nic Pizzolatto's answer to all the criticism Season 1 received for its lack of interesting female characters.

Theory #2 — Frank Was Part Of The Blue Diamond Theft

Reddit user CokinRum suggests that Frank was part of the blue diamond theft. This would explain why Caspere was in possession of the blue diamonds — they were the currency Frank used to buy the land deal. The user also theorizes that the man Frank sent Ray to kill (under the false information that it was Gena's rapist) was also part of the robbery and Frank wanted him dead for his own protection. In the same thread, tierras_ignoradas points out that Frank and Jordan are frequently dressed in blue. Nothing on True Detective is coincidental, so this could be a further clue to Frank's involvement in the theft.

Theory #3 — The Woman Bartender Is "The Birdman"

The nameless, scarred bartender is also a character whose constant presence may not be coincidental. Ray meets up with both Frank and Ani at the bar, and it's noticeable that the bartender looks at him a little too often during these meetings. Reddit user YaBoyStrick suggests that she is the little girl in the photo (whose parents were murdered as part of the jewel theft) and her scars could have occurred during time spent in foster care. Of course, it's also possible that her injuries occurred at one of the sex parties. The user goes on to suggest that the bartender and Stan could be siblings — and, if she really is the Birdman, her relationship with Stan could explain why she didn't kill Ray when she had the chance. She knows that Ray is working for Frank, and that Frank and Stan were close.

Do any of these theories hold water, or are we going to be completely thrown when the finale airs? We don't have too much longer to wait, but until then, I'm putting my money on Jordan as the killer. It would be a major shake-up that would have people talking and tweeting for days — even the haters.

More like this
'Bridgerton' Season 4 Will Likely Focus On This Brother's Divided Heart
By Grace Wehniainen and Alyssa Lapid
'Bridgerton' Star Nicola Coughlan Confirms Season 3 Will Focus On Colin & Penelope
By Grace Wehniainen and Alyssa Lapid
'The Wilds' Has A Major Cliffhanger To Resolve In A Potential Season 3
By Brad Witter
Will ‘Moon Knight’ Return For Season 2? There Have Been Promising Signs
By Kadin Burnett
Get Even More From Bustle — Sign Up For The Newsletter