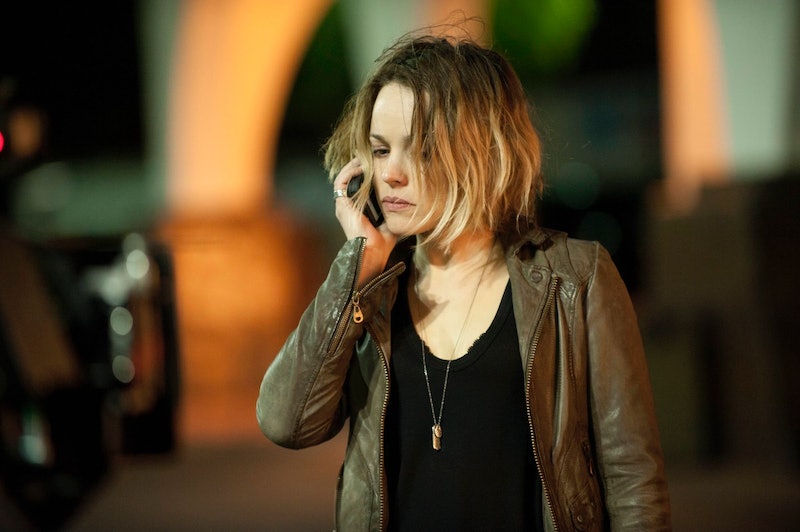 Like any mystery series, True Detective invites countless theories from both critics and devoted fans. This season, there's a seemingly endless amount of information to dissect: the abundant Greek mythology references, the pop culture allusions, and the haunted detectives whose pasts remain just mysterious enough to potentially be linked to the murder case itself. Although many fans were underwhelmed by the first few episodes, I think we can safely say that Season 2 of True Detective has hit its stride — and the theories already cropping up all over the Internet have become even more intense and thought-provoking.

Last week's episode, "Down Will Come," upped the drama factor in a major way during its final scene after a relatively slow-moving 45 minutes (then again, pretty much anything would seem boring in comparison to that epic shootout). But, bloodshed aside, we're continuing to gain insight into the lead characters' troubled pasts and current demons — which are arguably more interesting than the murder investigation itself. This is probably the reason so many theories relate directly to Ani, Ray, and Paul (although I can say that after spending hours perusing Reddit and Tumblr for theories, I'd barely scratched the surface).

Here's a roundup of my favorite fan and critic theories thus far, all of which sound just crazy enough to be true.

Ani's Father Was At The Jonestown Massacre

Ani is an enigma, but one thing we know for certain is that she doesn't have a terribly high opinion of her father. He seems unfazed by her disdain for him, but the one time he shows emotion is when he mentions "a bad thing that happened in 1978." Reddit user MidnightOcean compiled a list of possible events this could be referencing, the most intriguing of which is the Jonestown Massacre. This season is inspired by a real city and its corruption, so it's possible that the parallels to California state history won't stop there. Could Eliot Bezzerides and Ani's late mother have followed Jim Jones from California to Guyana?

Ani doesn't look old enough to remember anything from 1978 (if she was even born yet), but she seemed to understand the reference, so whatever happened is probably significant to their family history and her mother's eventual suicide. Plus, Eliot became a cult leader who raised his kids on a commune, so there must be some sort of backstory there.

This Case Is Somehow Tied To The Yellow King

True Detective Seasons 1 and 2 were not said to be connected, but that hasn't stopped fans and critics from finding clues that may indicate otherwise. Todd VanDerWerff of Vox acknowledged the theory is far-fetched, but he raises this point:

[I]f the criminal conspiracy — which extended into the highest realms of power and also contained elements of weird, occult demon worship — was truly that massive, who's to say it was confined to Louisiana? Who's to say it isn't a franchise operation, a conspiracy that takes on aspects of the finest crime stories of whatever geographic locale it finds itself in, in the same way that individual Applebee's locations hang mementos of the local sports team on their walls?

There are other parallels we can't deny — most notably the presence of creepy animal masks in both investigations. And in last week's episode, we were introduced to a pimp named Ledo Amarilla who has ties to Ben Caspere's murder. His last name is the Spanish word for yellow, which surely isn't a coincidence. Or showrunner Nic Pizzolatto just wanted to distract viewers from Vinci's real killer by sending us into a frenzy of forming theories that are linked to Season 1. In which case... job well done!

We know there's a possibility that Gena's rapist is Chad's biological father, she has seemed to acknowledge that by threatening to get a paternity test during their custody battle. Reddit user Ellroy_fan suggests this person is Frank's assistant, Blake. It would explain Chad's red hair, but that's not all. One variation of this theory proposes that Frank ordered the rape, with Blake being the assailant. Frank then manipulated Ray into killing one of his enemies, while also ensuring he'd have a cop indebted to him — which certainly would come in handy considering his corrupt transactions are closing in on him.

Fans will be watching closely to see if our theories will become truths, or if the finale takes True Detective somewhere totally unexpected.

More like this
Dr. Anna Pou Is Still Practicing Medicine After Facing Murder Charges
By Brad Witter
'Children of the Underground' Subject Faye Yager Now Runs A North Carolina B&B
By Brad Witter
The 'Black Bird' Stars Are Both Heading Back To Apple TV+
By Brad Witter
Why 'Black Bird' Suspect Larry Hall Recanted His Jessica Roach Confession
By Brad Witter
Get Even More From Bustle — Sign Up For The Newsletter