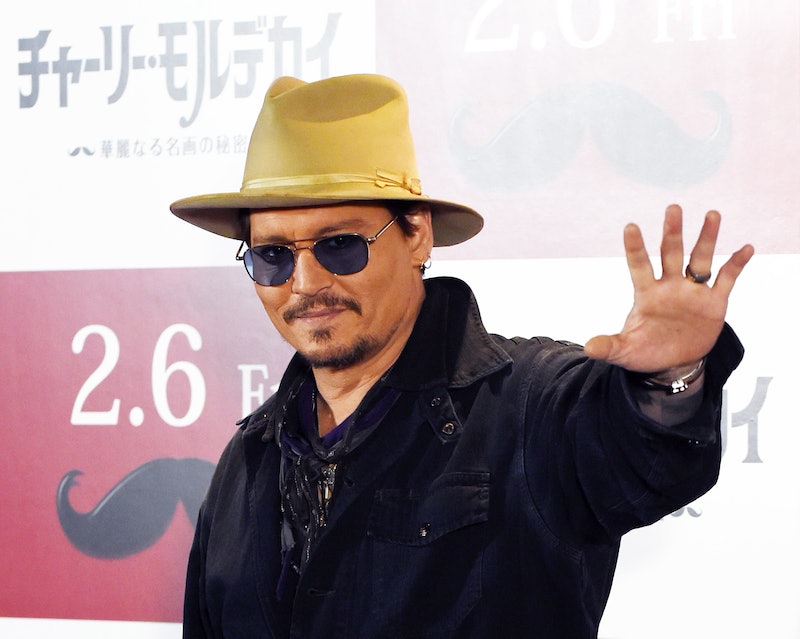 Who says pirates can't be cute? Johnny Depp's role as the eccentric Captain Jack Sparrow in the Pirates of the Caribbean movies certainly does have a handsome star and some adorable moments ("But why is the rum gone?"), and the off-screen antics of its lead actor are just as sweet. During a break from filming Pirates of the Caribbean 5 in Australia last week, Depp fed a baby bat while in full Jack Sparrow costume. Depp met the little orphaned bat at the Australian Bat Clinic & Wildlife Trauma Centre, which posted a video of Depp and little bat bonding to its Facebook page on July 22. To up the aww factor even more, Depp named the cutie Jackie Sparrow and is sponsoring him, too.

The 52-year-old actor seems to have certainly taken to little Jackie, who, in the video, enjoys being fed a tiny bottle by Depp-As-Sparrow. "There's a little bit more in there, sweetie," the actor tells Jackie as he feeds the little bat. Seriously. Too. Cute. Said the Centre in their caption of the video on Facebook, "It's so fantastic to see Depp showing a genuine interest, and helping us raise awareness for bats!" Watch the adorable exchange below:

It's not surprising that Depp would be so attached to Jackie, as the actor has never hidden his love for animals. Below, a few times he's showed off his affection for furry friends:

1. When He Bonded With A Monkey

In this cute featurette from the first Pirates movie, Depp expresses his admiration for Levi, who plays the monkey named Jack in the movie. "I like his work very much," Depp says in the video. "He's kind of a renegade."

On the set of the movie Sleepy Hollow, Depp bonded with a horse named Goldeneye, who had one eye. Once filming wrapped, Depp learned that there were plans to put the horse down and he swooped in to adopt his equine friend. I hope they've been frolicking together ever since.

He Used To Collect Lizards As Pets

As a child, Depp apparently loved to collect lizards as pets and he also played the voice of one in the 2011 animated movie Rango. "I’ve always had an affinity for lizards, and have always felt close to them and inspired by them," he told Us Weekly. "So when I was asked to play a lizard, I thought, ‘I’m halfway there.'"

He Took His Dogs With Him To Australia (Whoops)

Earlier this summer, Depp and his wife got into a lot of trouble with Aussie authorities from bringing their beloved canines to the land down under. Because his pooches Boo and Pistol were not properly declared in the country, the Australian government threatened to put down the terriers. Depp allegedly spent $32,000 to send the pooches back to the states in a private jet. Earlier this month, Heard was charged with animal smuggling in Australia.

His Favorite Muppet Is Animal

Animal is wild, unpredictable, and can't be tamed — so he and Depp have a lot in common. The actor told Empire magazine that Animal was his favorite muppet because "there's a certain irreverence that I like."

It's good to see that Depp's good qualities extend to his love of his furry friends.

More like this
This Pre-'Love Island' Video Of Olivia & Zara Together Changes Everything
By Bustle UK
Picky Eater? Sensitive Stomach? This Vet Nutritionist-Designed Dog Food Has A Plan For That
By Maria Cassano
The 5 Best Blankets For Puppies
By Jenny White
Beyoncé Just Announced Tour Dates: Here's How To Cuff Tickets To Her 2023 Shows
By Jake Viswanath
Get Even More From Bustle — Sign Up For The Newsletter
From hair trends to relationship advice, our daily newsletter has everything you need to sound like a person who’s on TikTok, even if you aren’t.