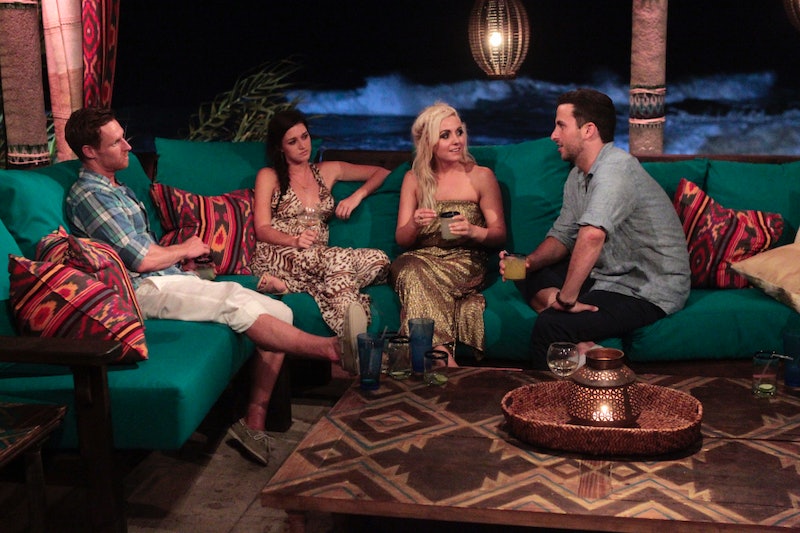 It's that time of year again — Bachelor in Paradise Season 2 premieres on August 2. And, while the show has the same untrustworthy editing of any reality show, there is some value in dissecting the Bachelor in Paradise Season 2 trailer, which holds plenty of hints as to who will be coupling up in the upcoming season. Sure, they've cut together an audio clip to make someone seem like they're hanging out with a raccoon, but they can't fake a makeout session. Yes, BiP has maximized the potential of the reality genre, which makes it the best, worst, and most wildly entertaining thing you will watch this summer.

The series is already promising one hell of a sophomore season, complete with double the hookups, breakups, and weird moments of that you couldn't dream up if you tried. And, since Season 1 debuted with a cast member hooking up with someone from the crew and ended with an engagement, this is going to be an exciting season of reality television. It's essentially impossible for it not to be. So, what's the only base left to cover before Season 2? Obviously to determine just who we're all going to be 'shipping once the season starts, of course.

They've installed a camera in the shower. That's how you know the show is ready to have, like, a dozen couples. This dark-haired lady looks like Ashley I, Jillian Anderson, or Jade Roper — both Ashley and Jade have earrings identical to the ones in the pic, so I'm thinking it's definitely one of those two women getting busy in the trailer.

Looks like a very tan couple, so they'll probably be a part of the original cast. The girl is blonde and the guy clearly has brown hair. Important details, people.

Celebrating Memorial Day, perhaps? The identity of this pair is so far impossible to tell, obviously. But this guy is formal enough to wear a collared shirt to a date, that's not necessarily a bad sign.

I mean, this screams BiP setup — they're out of the house and in the local town, which means this is probably a date card couple. This pair also look pretty similar to the couple from the yacht, too. My first instinct was to guess that this strong-chinned dude is JJ, but he doesn't have that distinct leg tat. As for the blonde with him, she's probably one of the "free spirit" blondes, like Tenley or Jeulia. Could this be the yacht daters? If a couple is going to last on BiP, usually they wind up taking multiple date cards (people kept giving Marcus & Lacey their dates by the end).

During the trailer, it looked like this was a moment as a couple started to kiss. But from this angle, looks like it could be a tease.

Another pair likely on a date card outing. This guy is clearly castmember Jared Haibon, while his date looks like she could be Ashley I, though it's a little hard to tell since she's smiling brightly instead of crying.

Couple #7: Dinner Date On The Town

That bearded dude — I'm pretty sure that's Dan Cox from Desiree's season — the beard is a dead giveaway. And with him, could that be Amber James from the most recent Bachelor? It looks like her, but she'd have to be an early guest, because she's not in the main cast.

Well, this is new. The Rustic Fantasy Suite seems to come complete with cameras and lighting in Season 2, rather than just some edited together whispers and a cut to a door closing. But who are these guys? I do believe these are the same couple, but that's just based on the facial hair. The immediate guess is that it could be Dan again, but I'm sure shaving isn't anyone's first priority in paradise. Perhaps it's Mikey Tenerelli, who's got a bit of scruff in one of ABC's promo images.

Doesn't that look like Jared? But, instead of being paired with Ashley, now it looks like he's smooching on Clare Crawley. Who knows which relationship will last, but I'm always going to be a Clare fan at heart.

A time-honored Bachelor tradition is hooking up while swimming, and it looks like Tanner will be jumping right in. From behind, it'd usually be impossible to tell who he's with, but the nails are a dead giveaway: Ashley I. has them on in her cast picture.

And, Finally, The "Married Couple"

I'm sure this is another one of BiP's cruel jokes, like when they made Michelle Money and Cody Sattler take faux-engagement photos. But yes, these two will supposedly get "married." Justin Reich isn't in the first episode of BiP, but that looks like him to me, so maybe he'll be walking in late in the season. As for his "wife," she's not one of the three brunettes in the first episode, either. Since most of the contestants are plucked from Kaitlyn or Chris' seasons, I'm going to guess she's Mackenzie Deonigi.

While there will obviously be tons of Bachelor in Paradise couples, last year, one pair did get engaged by the finale — so maybe the unthinkable will happen twice. Watch the full trailer here: