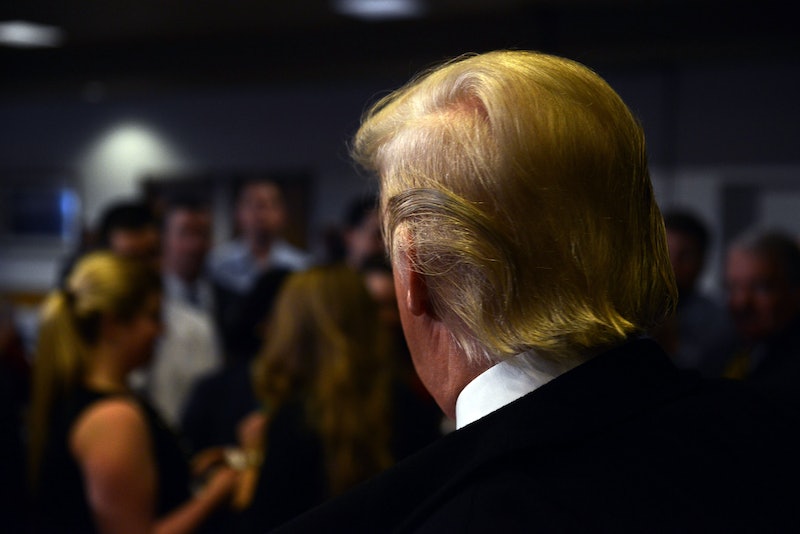 With so many Democratic and Republican candidates setting their sights on the 2016 presidential election, it's hard to keep up with campaign announcements, much less where each hopeful stands on important issues like immigration and foreign policy. The primaries may not make the election much easier to stomach, either. It's going to take a lot of air time and logistics to fit that many candidates into a town hall debate. For that reason, voters may be better off casting their ballots based on something arbitrary, like a candidate's ice cream preference or state they were born in. So, if we're going by random designations, ranking all 20 presidential candidates by hair makes perfect sense.

What better way to choose your candidate than through their lustrous locks or lack thereof? If each politician's follicles could talk, they'd undoubtedly tell the real story of just exactly what is going on with this election as well as what's up with the person they're attached to. Hair may be the best marker of where a candidate's priorities lie, whether it's in self-care or the type of "couldn't care less" attitude with getting down to business, though looking polished does do wonders when it comes to first impressions. So, whose hair has what it takes to be POTUS? Let's go from best to worst.

Trump's coif is so iconic, it's spawned a series of memes. The headline-making capabilities of Trump's rants are unmatched except perhaps by the power of his pompadour. Really, you can't have one without the other, which puts The Donald's hair in a class all its own.

There's something rather fascinating to the perma-cowlick twirling itself ever so slightly on Chris Christie's forehead. If Christie is telling it like it is, as his campaign slogan says, he may want to address just what's going on with his bizarrely eye-catching hair that's just as loud and proud as the GOP candidate himself.

Rick Perry's hair is fairly standard fare for a proud Texan businessman. The hair almost so perfectly encompasses Perry that even the thought of putting a Stetson on it is kind of weird and counterintuitive.

Classic and actually kind of stylish, Hillary Clinton's hair has undergone a few changes over the years. But it's traditionally been manageable and similarly just as fitting to the former secretary of state as Perry's puffy business hair is to his head. Even now, I'm still on the fence as to who should round out the top three.

Rand Paul's hair is unquestioningly a top 5 style: just tousled enough to attract attention but ultimately falling flat. In an ideal world, maybe Paul's hair and politics would be more practical than they are.

Rick Santorum's hair certainly isn't winning any awards, but it's hard to imagine a decent style on such a unique candidate. Santorum has long been associated with well, not the best of things, and his hair is mercifully innocuous.

Plenty of jokes could be made that Lindsey Graham's bachelor status is what makes his slightly out-of-control hair a sight to behold, but really, it's probably that Graham just parts his hair in a weird spot.

Scott Walker's hair is presumably either a tar pit mix of hair gel and product, or it's frozen to his skull with enough hairspray to evoke the musical. It's a rigid, uncompromising style in line with his stubborn politics.

John Kasich's hair is surprisingly modern compared to many other styles on this list. The only problem is, it doesn't look contemporary enough to be relevant. Next.

Does every Bush just have the same barber? Is Barbara Bush cutting everyone's hair based off a template or something? These are the questions I think about more than whether the former Florida governor's hair and the rest of him could make a good president.

Ted Cruz and Lindsey Graham may need hair-parting lessons together. Cruz's problem is just subtle enough to be worrisome, whereas Graham is definitely more eye-catching.

Carly Fiorina has really decent hair at first glance, but then you delve a bit more into the style and realize everything's just slightly off — as with her politics.

George Pataki could do a lot with his slightly wavy locks. If anything, it's more frustrating that he just lets them lay there rather than spruce up his appearance. This fits with Pataki's relative obscurity that he appears to be unconcerned with fixing.

Mike Huckabee's hair just makes him look old and fairly out of touch, therefore it may secretly be perfect for politics. Oh no.

The candidate with perhaps the simplest hairstyle out there, Carson's 'do earns a resounding "meh," but at least it looks decent on him.

Lincoln Chafee seems like a pretty happy-go-lucky guy and so does his hair. What worries does that scalp have when there's just enough being done for it to be healthy?

Sorry, Bernie. Your hair is a little overwhelming sometimes.

Martin O'Malley's hair doesn't even look real it's so finely polished and manicured. Maybe he isn't either.

Likewise, Marco Rubio is in the half-human, half-robot candidate camp with a hairstyle and color that looks so generic, you'd think it was a wig.

Words cannot describe just how much it looks like Jim Webb's hair is trying to flee his scalp. I wish it safe travels.

Bobby Jindal may have indefinitely suspended his campaign, but I'm still willing to give a shout-out to the 'do that keeps on rising. Prior to announcing his candidacy, Jindal's hair was relatively flat and lacking volume. Now, it's gone in the total opposite direction. Maybe soon he and his hair will find a solid balance.

More like this
John Mulaney & Olivia Munn's Relationship Timeline Features The Comedian's First Father's Day
By Jordyn Tilchen
ITV’s Six Four Is Based On A Best-Selling Japanese Mystery Novel
By Sophie McEvoy
Here's How To Stream 'Downton Abbey: A New Era' & The New 'Downton' Channel
By Alice Broster and Sam Ramsden
'The Undeclared War' Took Inspiration From This Gavin & Stacey Location
By Maxine Harrison
Get Even More From Bustle — Sign Up For The Newsletter