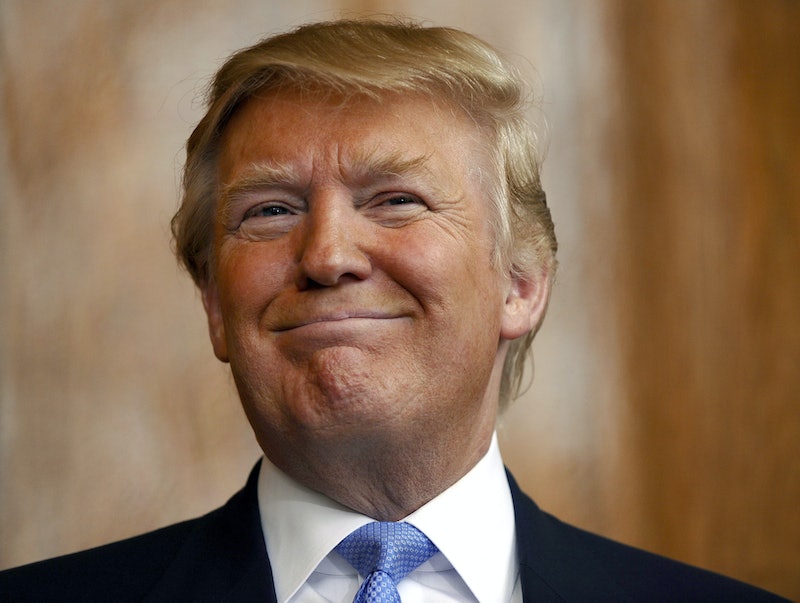 Donald Trump is a fascinating man. Yes, he's super rich, had his own reality show, and threatened to run for president almost every time we got close to an election, but the most interesting part about him is undoubtedly his hair. I mean, how does someone go through life with such an infamous combover? Trump's hair has inspired countless memes, and they've only gotten better since he officially announced his 2016 run for president Tuesday. As a person who also has hair, I can't seem to wrap my head around Trump's chosen style. We know it's not a toupee, so he actually wakes up every morning and makes a conscious decision to continue combing all his hair over to one side in a completely obvious way.

Trump has a lot of obstacles to overcome if he wants to become president of the Unites States — he's said a lot of offensive things over the years, started a lot of fights on Twitter, and has a history of flip-flopping on issues. However, his hair could be his biggest challenge. Could Americans ever elect a leader — a person who will be the face of our country for at least four years — with such an off-putting hairstyle?

His hair doesn't simply sit still on top of his head and stay out of trouble either, it jumps around and blows in the wind all the time, leading to embarrassing photos and videos of the political-hopeful. These incidents would be 10 times more awkward if he were president, as he will be endlessly ridiculed.

Here are some memes that prove how ridiculous Donald Trump's hair is.

And if you want to know how to style your hair like Trump: