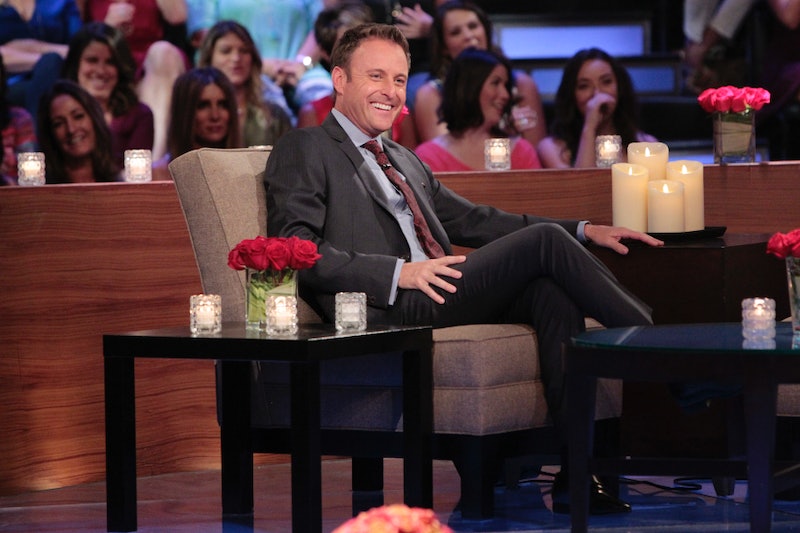 You may have noticed that most live Bachelor/ette audiences — those particularly expressive people at the Women/Men Tell All and After the Final Rose live tapings — have a similar vibe about them: Attractive, aged mid-20s to mid-40s, and well-dressed with an affinity for statement necklaces. And, if you're a fan of The Bachelor/ette with a tendency to gasp when shocked or mutter to your neighbor with raised eyebrows when drama unfolds in front of you, you might be wondering how you can go to The Bachelorette: After The Final Rose taping. And, I get it... everyone should be looking for their chance to stare deep into the blue vastness of Chris Harrison's irises in person.

But, I have bad news: It seems to be a very tricky task to actually get inside the After the Final Rose fighting/loving grounds of The Bachelor/ette. When trying to attend a live taping of, say, something like The Tonight Show with Jimmy Fallon or Saturday Night Live, one needs to enter a lottery the moment it becomes available online to reserve free tickets for a show within the next month; if that doesn't work, it's time to start drawing on connections. For the Bachelor audience, only the latter seems to be a valid option for getting your white jeans into a a cold, hard seat.

The online footprint for tracking down After the Final Rose tickets is all a little mysterious, but it seems like the attending Bachelor/ette fans basically need to be invited or have a connection with someone at ABC who can reserve your crew a spot in the audience. There's also the option of buying your way in, though the tickets for sale to the public are limited. During Desiree's season, Chris Harrison tweeted that there were two sets of tickets available for whoever donated $5,000 or more to Kind Campaign first. Tickets donated by ABC are also sometimes available for charity auctions like a pair that were auctioned off at Charity Buzz for Chris Soules' After the Final Rose.

So, it may be hard to get in there, but once you do... expect a thrilling, electrifying circle of hell. That's according to Allison P. Davis who attended Chris Soules' Women Tell All special and wrote a recap of it for The Cut that included a lot more Subway sandwiches and Dr. Pepper than I was expecting. Apparently, audience members are "strongly recommended [to wear] business attire and jewel tones," which isn't too unusual, but the 15 minutes spent filming reactions — "Laugh! Applaud! Turn to your neighbor and respond to something shocking. Look shocked! Not that shocked! Too shocked" — is a little more out of the ordinary for a live taping. Of course, it makes a lot of those fish-mouthed reaction shots make so much more sense. Ultimately, Davis said that though she thought the live taping would be a lot like attending a bigger and better viewing party, "In reality, it was a five-hour slog during which I couldn’t use the bathroom without an escort."

But, hey, if you make your way in there, it probably means that you're well connected or have given a substantial amount of money to charity, so good for you!