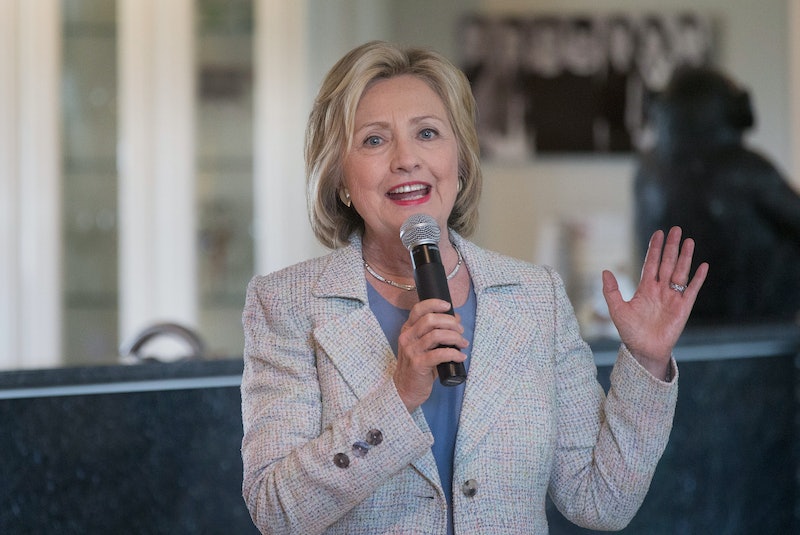 For the next leg of her campaign, Hillary Clinton is taking on climate change. In a video released by her campaign Sunday night, Clinton unveiled her official climate change position, as well as the policies she intends to put in place if she reaches the White House. So what is her position on this major 2016 talking point? Well, let's just say that Clinton's stance on the validity of science places her more in line with Pope Francis than Jeb Bush.

"I'm just a grandmother with two eyes and a brain," Clinton says in the opening lines of the video. "I know what's happening in the world is going to have a big effect on my daughter, and especially on my granddaughter."

Clinton goes on to attack her Republican foes, including frontrunners like Bush, Donald Trump, Rick Perry, and Sen. Marco Rubio, for rejecting climate change science — or just science in general — in 2015. More and more, taking a stance against climate change has become a hallmark of the Republican Party, and Clinton wants to make sure none of us forgets it.

"It's hard to believe there are people running for president who still refuse to accept the settled science of climate change," Clinton says. "Who would rather remind us they're not scientists than listen to those who are."

"You don't have to be a scientist to take on this urgent challenge that threatens us all," Clinton continues."You just have to be willing to act."

So what is HRC going to do about this threat? First, she praised the renewable energy industry for preventing premature deaths and asthma attacks, while also creating new jobs for Americans.

But Clinton also put forth a much stronger call to action in her latest video. "On day one as president, I will set two ambitious national goals that will test our capacities," Clinton said.

And her two goals are (drumroll, please):

Clinton promised that a "comprehensive agenda" will be released within the next few months, but she did give a few hints while addressing a crowd of supporters in Ames, Iowa on Sunday. For instance, Clinton said she plans to use tax incentives, including a possible renewable of the wind energy tax credit, to reach her 10-year goal of powering homes in America with renewable energy.

The former secretary of state also talked about transitioning America from fossil fuels to new sources of energy: "We need to get the incentives fixed in our tax system which as you know are too heavily weighted toward fossil fuels."

So far, Clinton's video is a welcome change from much of the climate talk we've been hearing this campaign season. While we await Clinton's full agenda, we can at least take comfort in knowing that Clinton has more in common with Pope Francis than Rick "The Pope Is Not A Scientist" Santorum, et al.