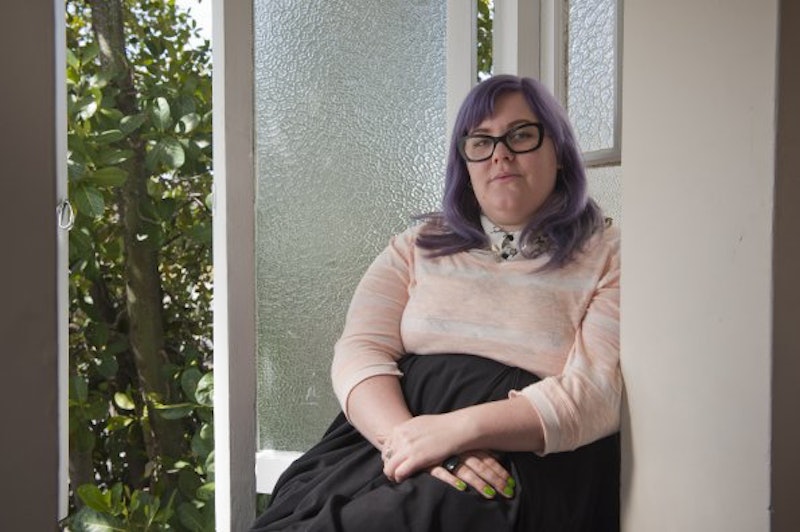 There are a few widespread myths and common complaints that detractors have about the size acceptance movement, and that seemingly always come into play when, say, un-retouched pictures of Tess Holliday go viral or when the body posi documentary Plus Size Wars comes out. There's the common refrain of Internet commenters that encouraging size acceptance and finding all bodies beautiful and valuable means "promoting" or "glamorizing" obesity and "unhealthy" lifestyles. The fear that a plus-size body whose value is not dictated by diet culture can be seen as beautiful — and whose existence is unapologetic — is palpable.

It's all I can do to roll my eyes when I hear these common complaints and the myth that the plus-size community consists of a bunch of people who lay around eating cheese and watching TV all day (uh, some of us do, though, because that is awesome). It's the idea that self acceptance means "letting yourself go" and "giving up on yourself," which I saw expressed with alarming frequency in response to certain articles urging people to "Love Your Saggy Boobs" or "Love Your Cellulite." Guess I missed the memo that, apparently, these are some of the worst messages to be instilling upon other humans. So harmful that they even cancel out the important "all bodies are good bodies" narrative. I'll let you in on a little secret, though: Self acceptance and "giving up" are not the same thing.

1. All "Self Acceptance" Means Is Not Hating Yourself

Really. That's it, nothing more or nothing less. Some days you're going to need a reminder that it's OK not to love your body and some days you'll need a reminder not to hate it. Self acceptance is not a place to make judgments about things, places, people, or bodies being either simply "good" or "bad."

2. You Can Accept Yourself As You Are, Always

There should never be any pretext or prerequisites to self acceptance. The term itself literally just means accepting and growing to love yourself. The way you are is your reality, and while it takes work, acknowledging who and what you are right this second is possible — even if you don't happen to like it very much.

Deciding to be OK with how your body looks or what your bank account is like or what type of grades you're getting and, instead, focusing on you will remind you where your value as a human being actually lies. While all of these things are no small deal and can affect your life and the quality of your life greatly, being able to understand the relationship between them and your value as a person (aka, none) is important.

4. It Allows You To Have Some Standards

While there will always be things out of our control, accepting yourself for how you are now and not making that contingent on change means that you're more likely to ask others to do the same. Being treated with dignity and respect shouldn't depend on your willingness to change or shrink or be "better." Withholding these things until someone decides to lose 10 pounds or dress "better" or only if they're wearing a bra that makes their saggy boobs look perky isn't any kind of actual acceptance at all.

5. Self Acceptance Is Actually The Key To Change...

Without acknowledging your current state and station, it's impossible to know what's going on with yourself and your life and why or what you would even change. You have to accept your current reality and the way things are to be able to move on. Self acceptance lets you take stock and make changes at your own pace without ultimatums and makes them an actual, conscious choice that you make. Accepting something for how it is now doesn't mean it will never change, it just means that it doesn't have to for you to see value in it.

6. And To Realizing Some Things Are Really Just Never Going To Change

Cellulite is kind of a permanent feature and surgery is the only thing that's going to "fix" saggy boobs and some bodies just aren't physiologically made to have washboard abs — these are all just facts. Deciding that you want to keep trying to fly by flapping your wings doesn't change the laws of gravity, just like slathering on caffeine creams and working out isn't going to completely erase cellulite.

Sure, I'm a big fan of doing whatever you can and want to change things you don't like — for whatever reason. If it makes you feel better and doesn't hurt anyone, do it! However, I'm also personally a fan of spending my time and effort on things that will actually make a difference. Accept the things you cannot change... or however that thing goes.

We change every single day: physically, mentally, emotionally, and our display pic on Twitter. Self acceptance is something that's a constant in terms of it always needing to change and adapt to who we are that day and that minute, what we look like, and what's going on in our lives. If we're tying being OK with everything from looking a certain way, being a certain weight, having a certain job, or relationship status, then what's going to happen if those things change?

The way we accept ourselves and what that looks like is also going to change. If we tie feeling OK about ourselves to only one specific way of being, that's going to screw us way over for the rest of our lives. We need to be on our own side to actually make it through, and that's pretty much impossible without being able to accept ourselves and other people for what and who they are always.