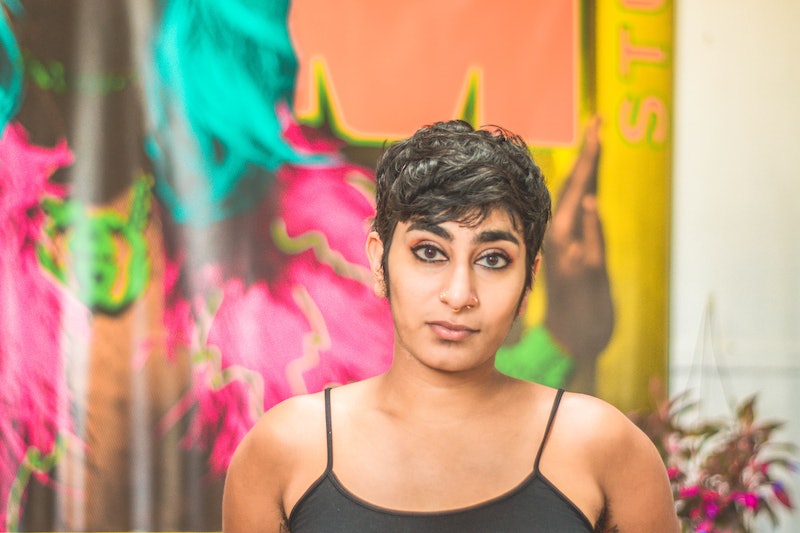 A cursory glance at headlines of contemporary America today and you could easily draw the conclusion that the rights of immigrant communities and minorities are in reverse. Just take the current administration’s attempts to increase Immigration and Custom Enforcement’s capacity to detain immigrants, or the 2017 Muslim ban which denied entry to over 150 million people from six Muslim-majority countries.

It’s this increasing hostility that’s significantly informed U.S.-based poet and co-creator of the Emmy-nominated web series Brown Girls, Fatimah Asghar’s debut poetry collection, If They Came For Us. Her poems tackle themes as far-ranging as sexuality, belonging, and identity, while also capturing the challenges of being a queer Pakistani Muslim woman in the modern America.

“Ever since the dawn of America, everyone has been told they’ve needed to prove themselves,” she tells me. “It’s beautiful when we’re told ‘we’re all the same, it doesn’t matter where you’re from’. [But] that can be taken away. When you look at the history of the U.S., black and indigenous people have always been discounted of what ‘American’ means. The definition of what is American has always been on the side of white, property-owning men.”

The present political crisis in the U.S. is as turbulent as the past, Asghar stresses in her work. Perhaps the most powerful aspect of the book is how she sheds light on how the legacy of Partition — the creation of two separate states of Muslim-majority Pakistan and Hindu-majority India in 1947, which claimed the lives of almost two million and displaced 10-15 million — and its parallels to the present day Trump administration. Just take young children being separated from their families when they cross the US-Mexico border to the doubling of the number of women miscarrying while detained by ICE.

So does If They Come For Us then serve as a rallying cry? “It’s an important historical event for Americans to contend with,” Asghar tells me. “Are we going to go down this route? It’s troublesome to live in a world where black and indigenous people are being murdered by U.S. police at alarming rates. Politicians can’t say ‘black lives matter’ without being eviscerated. That’s such a basic thing to say and such a basic truth. How is it they can’t say that?”

Also central to the collection is tackling topics considered taboo among the global South Asian diaspora and the wider Muslim community, yet remains a universal experience for women like herself coming of age in the West.

"Haram" [page 33] vividly evokes the confusion, uncertainty, and anxieties of brown girls having body hair, compounded by Asghar’s aunt discovering her and her sister’s pubic hair. As she hands the pair scissors and they discard their hair in a plastic bag from the corner shop – “too thick to flush down our struggling toilet” – we see how being shamed into hairlessness is not just upheld by Western standards of beauty but within South Asian standards too.

Meanwhile, “The Last Summer of Innocence” [page 57] touches on the stigma of menstruation. "Micro-aggression Bingo" [page68], too, sheds light on the challenges women of colour can routinely face in traditionally white spaces. Taking the format of a traditional bingo template, WoC and Muslim readers can circle "Stranger calls you sexy samosa at the bus stop and then asks for your number" and "Oh, did your parents make you wear a hijab?" As Asghar recalls: “It’s written that way because that’s the way it feels like when you have all those micro-aggressions coming at you. It feels like a score card!”

I wonder if If They Come For Us is a tool Asghar has created for a younger version of herself. “[For] young Muslim women and queer people, there’s so much shame talking about sex or your body. I see it so often,” Asghar agrees. “So many of my Muslim friends growing up lived these dual lives because of the shame and inability to talk about it. ‘Why do I suddenly have boobs? Why am I hairy?’ There was nobody to speak to and we were expected to figure it out.”

This was particularly compounded for Asghar, as she was orphaned at a young age, an experience she describes as a confusing and lonely time. “I knew what it would have meant to me if I’d seen an older Muslim person be like ‘I’ve been through that stuff’. It would have made me feel less alone,” she recalls.

"Belonging," an overarching theme of the collection, can transcend borders and blood, not unlike chosen communities. It’s certainly the case for Asghar, who identifies as a queer Muslim woman. “I find that when I’m around queer Muslims, it’s beautiful,” she says. “It’s a margin of a margin and when you find them, you feel so understood.” It’s particularly hard-won for her, not least because she’s faced criticism within the mainstream Muslim community for her sexuality. “I’ve heard straight Muslim people [say to me] you’re just trying to be Western. People will try to convince you that [being queer and Muslim] can’t co-exist. It’s disheartening,” she recalls. “They’re not contradictory at all.”

She hopes that fellow queer Muslims might read If They Come For Us, if only to see themselves and their experiences reflected back for the first time. “I didn’t want people to read this and think they’re not seen,” she affirms. Poignantly, Asghar’s dedicated her book for her family, "blood and not."

'If They Come For Us' by Fatimah Asghar
Amazon

We might be in the midst of a PoC-led revolution in British publishing, with more emerging writers of colour published than ever before. It’s a radical departure from 2016, when fewer than 100 books by British authors of non-white backgrounds, and just one male black novelist, were published.

Despite the industry’s strides, PoC authors are — and often can be — expected to discuss racial trauma or historical oppression rather than the mundane and the familiar. Is Asghar conscious that as a brown, Muslim, queer woman, she might be expected to draw on the challenges she’s faced in the West in relation to each of her distinct identities, not just in If They Come For Us but also in her future work? “PoC should be able to write whatever they want,” she affirms. “The idea of writing without a bias is fake and doesn’t exist. All of my identities [queer, brown, Pakistani, Muslim] are every layer of my being.”

Ultimately, Asghar hopes that If They Come For Us will encourage the South Asian diaspora — and marginalised communities at large in the West at that — to put their difference aside in the face of their continuing crackdown by those in power: “We can create solidarity through difference. In the spirit of [the book’s title] If They Come For Us, it’s as much as a pledge as a warning.”

If They Come For Us by Fatimah Asghar is out now

More like this
5 Gripping Books To Read From Women’s Prize For Fiction Winner Ruth Ozeki
By El Hunt
Lauren Rae Is Bringing Back The Sex And The City Vibes In Her New Memoir
By Shahed Ezaydi
Annie Lord’s Memoir Will Make You Believe In Love Again
By Shahed Ezaydi
16 Novels That Paint A Realistic Portrait Of Abortion
By K.W. Colyard
Get The Very Best Of Bustle/UK