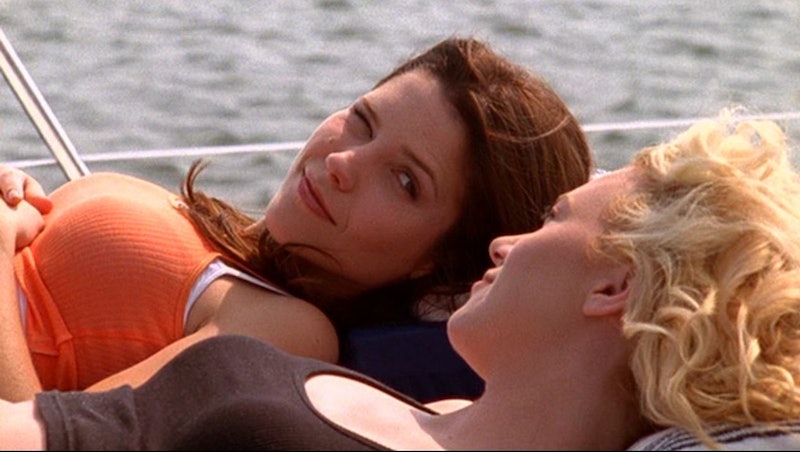 Teen shows are one of life's true pleasures. They are soapy, romantic, and full of iconic characters. One Tree Hill is definitely one of those shows. Brooke, Lucas, Peyton, Haley, and Nathan's adventures in high school and beyond were enthralling — even when the drama sailed over the top and off into the stratosphere. That's one of the many reasons you loved One Tree Hill so much though. It's one show that always did its own thing, and made no apologies for it. (For reference, see Dan watch in horror as a dog eats his donor heart.)

Part of the show's appeal comes from how perfectly it captures the '00s. Lots of TV series tackled the '90s experience, but One Tree Hill is one of the few that found inspiration in the strange times that were the turn of the century. Technology was advancing and so was the reality of how teenagers lived. The residents of Tree Hill embody the era with ease, and that makes watching old episodes on Netflix feel like you're checking in with your favorite high school pals.

One Tree Hill is a wonderful, crazy, and unforgettable show, and here are 11 reasons why you loved it so much. And no, it's not just because Brooke Davis is the actual best, but...

1. Brooke Davis Is The Actual Best

At least 70% of your love for One Tree Hill is tied to Brooke and her ability to see through everyone's garbage, including her own. She is a sass machine with a heart of gold, and pretty much everything she ever said is quotable. But she’s also an incredible friend to Peyton, despite her BFF getting tangled up with her on-and-off boyfriend, Lucas. Brooke also proved she wasn’t superficial when she befriended and went to prom with Mouth, the school’s geek. Not to mention, she was a sex positive woman before that was mainstream; Brooke even coined the phrase “Brooking yourself” to describe pleasuring herself.

Brooke was iconic not only because she was self-assured and loyal, but she was also a girlboss before that was even a thing. The OG entrepreneur, Brooke transcended the small boxes that high school cliques put her in and joined the Clean Teens before launching her own fashion line Clothes Over Bros, all the while maintaining relationships with the most important people in her life.

Most of the romances on One Tree Hill weren't built to last, but Nathan and Haley were always meant to be forever. Though Nathan originally starts dating Haley as a way to taunt his half-brother Lucas, the bad boy quickly falls for his English tutor. Much to the chagrin of Haley’s best friend Lucas and their parents, the two fall so deeply in love that they decide to get married while still in high school. The writers threw plenty of conflicts their way — including differences in their career goals, cheating, and alcoholism — but “Naley” pulled through and stuck together as one of the longest lasting and most beloved relationships in television. From their first season courtship to their complicated marriage, their love story gave the show half of its heart.

The other half of the show's heart is Brooke and Peyton. Basically sisters, the childhood friends dealt with everything with each other by their sides — from boy troubles, the death of Peyton’s mom, being held hostage, and even a friend breakup — and they always came out of every situation stronger.

Brooke used her friendship with Peyton as inspiration for her wildly successful company Clothes Over Bros, borrowing their inside joke of Hoes Over Bros. Peyton, in return, named her daughter after Brooke. With all of the ups and downs, especially in regards to their romantic relationships with Lucas, their friendship is a true testament to their Hoes Over Bros mantra.

If there’s one thing that One Tree Hill excelled in, it’s that it always kept you guessing. The show was known for its wild storylines, and no one in the Tree Hill universe was exempt from being affected. There was crazy nanny Carrie that tried to kidnap Nathan and Haley’s son Jamie, Peyton’s mysterious (and fake) half-brother who was actually a stalker, Nathan getting kidnapped while abroad, and Dan taking his brother Keith’s life, and ultimately getting away without so much as an investigation. For how idyllic Tree Hill seemed from the outside, the town seemed to attract the strangest of characters that led to the most outlandish storylines.

The main conflict of the first season was fueled by the animosity between half-brothers Nathan and Lucas, who have to suddenly work together as basketball teammates. For a large part of those first episodes, drama was amped up by Nathan’s status as the resident jerk and Lucas’ contrarian existence as a bookish nerd. But as the season and the series went on, one of the most rewarding bits of character development was watching these two grow from sworn enemies to actual brothers.

As far as fictional dads go, Dan ranks as one of the absolute worst. Not only does he push Nathan towards unreasonable achievements, but he also treats his other son Lucas with disdain…that is, until realizing he’s a talented basketball player that he can exploit. Dan was the antagonistic force of One Tree Hill who dated Lucas’s mother Karen for years before dumping her unceremoniously for his basketball career, terrorized his children, and even took his own brother’s life. But his evilness was so over the top — and his character arc afforded him many opportunities for redemption — it made it easy to love to hate him.

Rivaling only The OC, One Tree Hill is a treasure trove of '00s music, often fueled by Peyton’s burgeoning career in the music biz. The likes of Gavin DeGraw, Tyler Hilton, Switchfoot, Mia Catalano and Pete Wentz played at Peyton’s all-ages nightclub TRIC and later helped her launch her record company Red Bedroom Records. It was one of the formative teen shows that integrated music into its DNA, and the soundtrack CDs were a hot commodity for millennials everywhere. These were the artists and bands of your teen years, and hearing them again will always take you back to high school.

8. All Of Those Heartbreaking Moments

If you ever need a good cry, One Tree Hill was a go-to show for tears. Between limo crashes, losing parents and friends, a school shooting, and Lucas' heart issues, there was never a shortage of moments that would really make you feel things. Even the more mundane and realistic emotional moments between characters — like when everyone says goodbye to Tree Hill in the fourth season finale or when Lucas and Peyton finally get married in the sixth season — could be tearjerkers because of how much they felt like our own friends and family.

At the heart of the early seasons of the show is a teenage love triangle. The Peyton/Lucas/Brooke triangle is unique in that it was nearly impossible to choose sides: Lucas' love for both women always felt genuine and each of them had a unique bond with Lucas, but nothing was as powerful as the love Peyton and Brooke had for each other. The three friends and lovers circled each other for years and forced a fair amount of heartbreak on one another, but never lost the love and respect between them. Peyton and Lucas eventually got married, aided by Brooke’s realization of their true love.

But that wasn’t the only love triangle on the show: the parent generation also experienced their own messy drama in the romances between Karen, Dan, and Keith. Theirs was not quite as clean and loving as Peyton, Lucas, and Brooke, reflecting that age doesn’t always promise maturity.

Nothing takes you back to high school like watching the shows of your youth, and One Tree Hill is unique in the way it captures the burgeoning online culture of the early ‘00s. Peyton essentially lives her whole life on camera as she webcams her entire day to the world — occasionally to her detriment — but in a world without social media, there was a blissful absence of doing things for the ‘gram.

Cutest kid in the world? Most definitely. Nathan and Haley’s son, who is born as Haley goes into labor while giving her Valedictorian speech during their high school graduation, is a bright spot in the series, though the story of teenage parenthood could have derailed the show’s youthful energy. But Jamie (played by Jackson Brundage) seemed to be the perfect child. He didn’t throw tantrums or get moody, was obsessed with his rabbit Chester, and he was besties with not only his parents but also all of their friends.

Some of the best episodes of teen shows were the ones that felt like they could be rooted in our real world, and One Tree Hill’s school shooting episode was one of those moments. It was shocking, though informative and could have been pulled from the headlines of any newspaper across the country.

That wasn’t the only episode of the show that centered on very real topics: other episodes tackled issues like adoption, substance abuse disorder, mental health, stalking, unrealistic parental expectations, and teenage parenthood.

Over the course of nine seasons, we saw our favorite Tree Hill Ravens find themselves in high school and then come into their own in their young adult years in the flashforward to post-college years. Despite the wild circumstances that many characters endured, the series provided realistic and believable character growth for almost every character. Brooke transformed from the school’s popular cheerleader to a CEO and mom with a vision; Dan became an upstanding citizen after a lifetime of evil; and all of the characters realistically dealt with their traumas and found ways to open themselves to love and move on. For a show with many red herrings and dramatic twists, the characters always responded with grace. This character growth ensured audiences would return to Tree Hill for a rewatch, again and again.

The Scott family has some complicated dynamics, including the fact that Dan’s brother Keith had long-harbored a crush on his ex-girlfriend (and baby mama) Karen. Keith helped Karen raise Lucas, who saw his uncle as a surrogate father, and provided support to their family when they needed it most. Even when they weren’t officially dating, Keith and Karen’s friendship was one of the only mature adult relationships the show had to offer, and was aspirational for all of the kids on the show who came from broken homes and families.

Eventually Karen also realized that she loved Keith too and the duo got engaged. While their happiness was short-lived, their relationship lives on in the form of their daughter Lily.

Lucas was always the sentimental spirit who dreamed of being a writer, and each episode of One Tree Hill included one of Lucas’ favorite quotes. Featuring the likes of everyone from Shakespeare to Stephen King, Lucas’ narration grounded the episode and show in loftier themes. Even better were the insightful quotes about life from our characters as they navigated happiness, grief, hardships, and life in general.

They were the quotes that flooded AIM away messages and buddy info boxes, promising depth for a generation that was just starting to understand themselves. The quotes are still as apt as they once were to the teenage versions of ourselves.

Once you've seen One Tree Hill, there's no going back. You'll love this show forever.

More like this
Hilarie Burton Calls Candace Cameron Bure A "Bigot" After Marriage Comments
By Jake Viswanath
The First Trailer For 'That '90s Show' Includes So Many Nods To The Original Series
By Jack Irvin, Alyssa Lapid and Grace Wehniainen
The 'Ugly Betty' Cast Just Reunited In The Best Way
By Sam Ramsden
Kate Winslet To Star In Russell T Davies' 'Dark Season' Revival
By Sam Ramsden
Get Even More From Bustle — Sign Up For The Newsletter

This article was originally published on Aug. 18, 2017