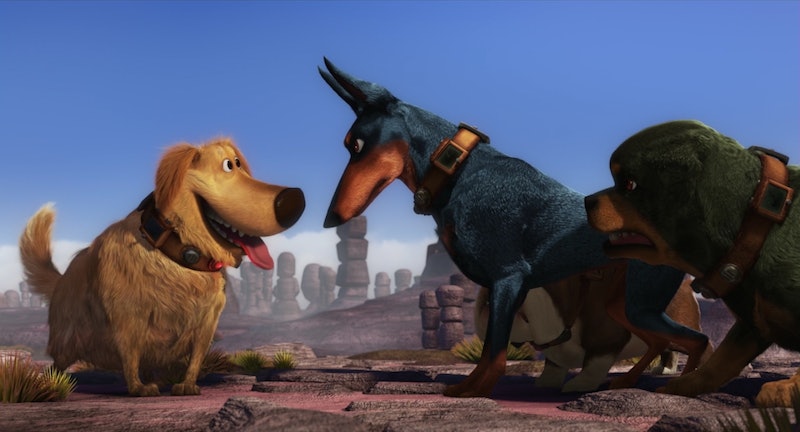 If anything can make quarantine more bearable, it's a dog, and for anyone looking for more furry friends while social distancing, one streaming platform has you covered. Here are 12 dog movies to watch on Disney+ that include everything from pups on sled teams to a ghost dog haunting a family. The streaming platform has plenty of canine-centric films to make social-distancing just a bit more adorable.

Disney has long been a major proponent of dog films, producing both animated and live-action movies featuring adorable pups. Many of these picks are nostalgic — who can forget the first time they saw Glenn Close's iconic turn as Cruella De Vil in the live-action 101 Dalmatians? But there are also newer movies that add a new twist to beloved dog stories, such as the spooky zombie dog in Frankenweenie, or the Pixar short Out, about a man who finds the strength to be himself with the help of his precocious puppy.

Dogs are statistically proven to make people happier — psychologists agree that dogs improve your mood and help lower stress, as per Psychology Today. Not everyone can get a pooch of their own, but adding more dog content to your life is easy. If you're not able to adopt a pup at this time in your life, these Dsney+ films may help you deal with your social distancing blues.

Begin your Disney+ dog film journey with a classic. Lady & The Tramp was first released in 1955, and follows a Cocker Spaniel named Lady that begins a romance with a stray mutt named Tramp. The film contains the iconic spaghetti-sharing scene, and even years after it was released, it remains an iconic addition to dog cinema. (Disney+ also recently made a live-action version starring Tessa Thompson and Justin Theroux.)

Another iconic Disney premise is 101 Dalmatians, in which a villain named Cruella de Vil attempts to steal a litter of Dalmatian puppies in hopes of using their fur to make a coat — it's truly not possible to overstate how upsetting that premise is. Luckily, the Dalmatian puppies have two parents, Pongo and Perdy, who foil the super villain's plan. Both the animated and live-action versions are streaming on Disney+.

Okay, to be upfront, Homeward Bound does have a cat in it, but that does not mean this film isn't important in the canon of dog-related movies. Homeward Bound follows Chance, a bulldog, Shadow, a golden retriever, and Sassy, a cat, who get left behind when their family goes on vacation to San Francisco. The film follows the trio as they try to make their way home and become best friends in the process.

Take a break from all the wholesome dog stories for something a bit more spooky! (But still pretty wholesome, let's be honest.) Frankenweenie gives us the tale of young Victor Frankenstein, a science nerd and outcast whose pup Sparky dies. Victor jolts Sparky back to life and all is well — until his classmates start to use the same science to bring other animals back to life with disastrous results.

Hear me out — Lilo & Stitch is a dog movie. Or, it could be a movie about a dog if Stitch wasn't a genetically modified alien. Either way, Lilo and Stitch teach each other the same ideals of love, loyalty, and family that people and their dogs share.

On May 22, Disney+ premiered the first of its Pixar SparkShorts, and Out is as charming and moving as fans would hope it to be. The short film features Greg, the animation studios' first gay main character, who is about to move to the city with his boyfriend Manuel. Greg's parents come to help pack, and he struggles to come out to them, but finds the courage thanks to the couple's puppy.

Willem Dafoe is the human star of Togo, Disney's latest dog-centric movie, but the real draw is Togo, the real life canine hero who led a team of sled dogs during the 1925 serum run to Nome, Alaska. You may already be familiar with Balto, the dog who led the sled that ultimately delivered the life-saving serum, but no other pup ran more miles than Togo, the brave dog that history had pretty much forgotten until he got the Disney movie treatment.

8. Pick Of The Litter

Have you ever wondered what goes into training puppies to be guide dogs? Disney+ exclusive Pick of the Litter documents the ups and downs of six pups training to become guide dogs for people who are blind, and the process is even more intensive than expected.

In this low key-horrifying 1959 classic, mailman Tom Wilson, who has always hated dogs, has a son Wilby, who comes under an ancient curse and turns into a sheepdog at random. Will the mailman come around to dogs now that he's related to one? Who knows, but this movie is super weird. (That

Old Yeller is one of the most well-known dog films of all time, but it's best not to watch without a box of tissues nearby. Anyone who watched this movie as a kid was probably scarred forever by the tragic ending, but it's a must-watch about how beloved dogs are to their owners and the bonds that are forged between them.

In this adorable animated movie, a dog that is the star of a hit television show doesn't know that the villain he's chasing is fake, and embarks on a quest to save his owner. Along the way, he finds some adorable sidekicks, including a cat named Mittens and a hamster permanently stuck in its ball, who help him find his way home. This film might just be the perfect companion piece to Homeward Bound, for anyone trying to have a movie marathon.

If you watched Bolt and are in the mood for even more animated pups, Dug's Special Mission should definitely be added to your must-watch list. It's Dug (from Up!) the Golden Retriever's birthday, and he's tricked into chasing a bird by a group of his dog pals, which is really just a way to keep him away. Many other shenanigans ensue in this honestly delightful short film.

Whether you're in the mood for an animated adventure, dog-centric documentary, or a classic canine film, Disney+ has it all.