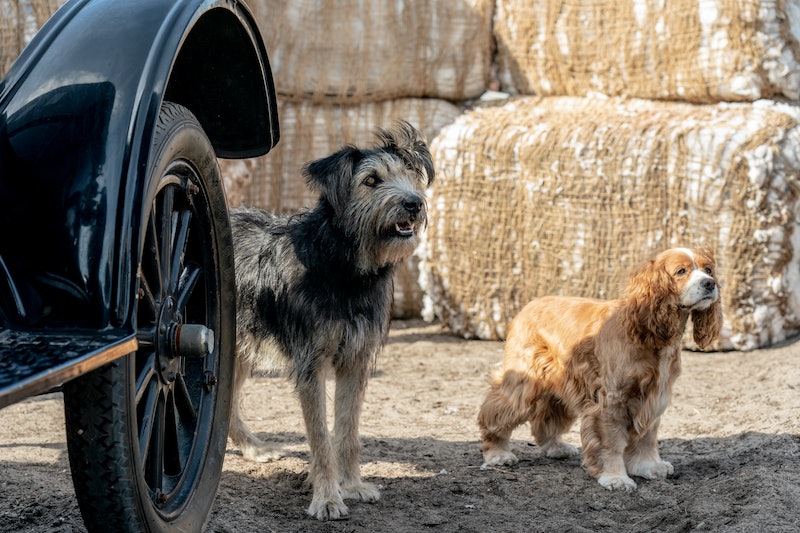 Last November, Bustle visited the antique-strewn, early 20th Century style set of Disney+'s upcoming Lady and the Tramp live-action remake, which starts streaming on Nov. 12. Everything from the carefully chosen vintage props to the period outfits evokes 1910, but the new Lady and the Tramp is a modern story at heart. The timeless tale of puppy love and finding your forever home will stay true to its roots for the most part, but throws out some outdated elements from the 1955 animated original.

Filmed in Savannah, Georgia, and set in an unspecified American town, Lady and the Tramp is the rare period movie that's not beholden to its time. Infusing the love story with inclusivity was a priority for everyone from the producers to the stars. "We're in the turn of the century, but we also wanted to keep an eye toward having a wonderfully diverse cast, we didn't want to be limited because this isn't a historical movie," producer Brigham Taylor explains. "For us, we want to see the world the way we want to see it, and that's how we cast it."

That sense of freedom extends to the human characters, who were largely blank slates in the animated film. For actor Kiersey Clemons, having the freedom to make Darling a more assertive, fleshed out young woman was part of the reason why she joined the cast. "I see it as creating this world of what it may not have been in 1910 for women, or women of color, particularly," she says. "So I've made her everything that women maybe didn't get to be at that time ... she's one sassy broad."

Clemons also says that Darling calls a lot of the shots in her relationship with Jim Dear — which is something her costar was happy to support. "We wanted to change the dynamic of the traditional marriage roles," says Thomas Mann, who plays Jim Dear. "Now she's the one who is strong-minded and in charge, and he's neurotic and kind of afraid of things, and more emotional."

But updating the movie for modern audiences and values extended beyond Jim Dear and Darling's marriage. The new film also eliminates the original's racially insensitive song, "We are Siamese (If You Please)." Taylor says the problematic song "was a product of its time," and that he knew they "could do something more interesting for our contemporary audience." As a result, Aunt Sarah's (Yvette Nicole Brown) cats' reign of terror will include a brand new tune from Janelle Monaé, who plays Peg.

From its more enlightened gender politics to ditching the Siamese cats song, this Lady and the Tramp is a period film for a 2019 audience. And, as Clemons explains, no one can argue that the movie's inclusive worldview is inaccurate to the early 20th century. "You can't tell us that here," she says with a laugh. "None of this would really happen. The dogs talk."

This article was originally published on November 4, 2019