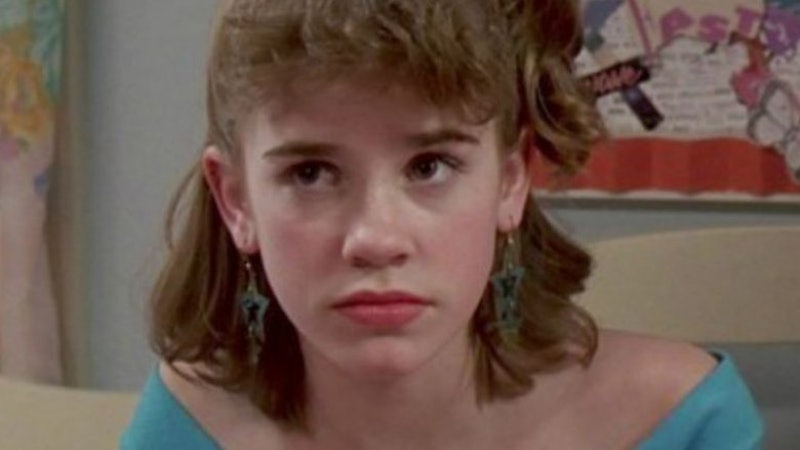 Christa B. Allen is at it again. The 13 Going on 30 star recreated Jenna Rink's iconic 13th birthday outfit in yet another TikTok dedicated to the film. Allen starred as 13-year-old Jenna Rink in the 2004 movie that also featured Jennifer Garner (as 30-year-old Jenna) and Mark Ruffalo (as adult Matty). Recently, the romantic comedy has been inspiration for Allen's TikToks, as she entertains her fans and herself in quarantine.

In the past week, Allen has posted a handful of videos recreating iconic scenes from 13 Going On 30, including a Sept. 1 post that recreated Young Jenna's birthday party preparations. In the clip, Allen throws on an almost identical outfit — off the shoulder top and belt included — and pops on some blue eye shadow, truly channeling her inner 13-year-old Jenna Rink. The only thing missing is the tissue-stuffed bra. "A little outfit recreation for the 13 going on 30 lovers," Allen captioned the TikTok. She completed the video with the perfect soundtrack, Madonna's "Crazy For You," which is a big song in the film. Allen may be almost 30 herself, but she definitely nails her 2004 look.

This isn't the first time Allen has revisited her breakout film. She first started recreating 13 Going on 30 on TikTok in April, and she's been posting nostalgic clips off and on ever since.

"I think because it meant so much to so many people, and it was just such a beloved film, that people are all so excited to see a person that was part of that zeitgeisty moment in the flesh," Allen revealed in 2019, speaking to Today about how she still gets recognized by 13 Going on 30 fans, all these years later. And, of course, "30, flirty, and thriving," is the line she hears quoted the most. "I can't wait for that to be the theme of my 30th birthday," she said at the time.

If her latest TikTok is any indication, Allen is more than ready to embrace the "30, flirty, and thriving" lifestyle.

More like this
Netflix Reveals First Look At Wednesday In The 'Addams Family' Spinoff Series
By Bustle Editors
Jennifer Coolidge Just Said The Most Controversial Thing About Legally Blonde’s “Bend & Snap”
By Maxine Harrison
Before 'Bullet Train,' Revisit These Brad Pitt 'Fight Club' Premiere Photos From 1999
By Grace Wehniainen
Jennifer Coolidge Needs 'Legally Blonde 3' To Happen So She Stops Getting Hot Dog Jokes
By Jake Viswanath
Get Even More From Bustle — Sign Up For The Newsletter