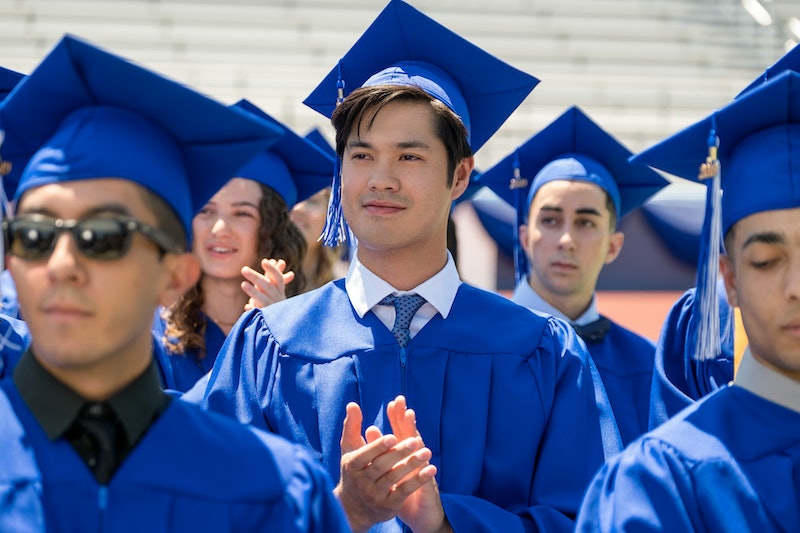 If there's any show that has caused an incessant amount of critical thinkpieces, social media outrage, and mental health analyses, it's 13 Reasons Why. But in the aftermath of its final season, the cast is choosing not to see the hit Netflix series in that light. 13 Reasons Why star Ross Butler reflected on the show's legacy in a new interview with E! News on Tuesday, July 7, saying that he hoped it would be remembered for more than its numerous controversies, but also for its message of friendship and "needing each other".

Butler, who played lovably sarcastic footballer Zach Dempsey in all four seasons, and even left his role on Riverdale to play the character full-time, said the "biggest lesson" that he took away from the series is the importance of community. "Throughout the show, the one lesson that we keep pushing over and over is that you need each other," he said. "You build a community, and that is the community that you turn to for inspiration, that you turn for advice, to help take care of you and for you to take care of them."

Although 13 Reasons Why's final season primarily focused on Clay Jensen's ongoing mental breakdown and his attempts to heal, Zach goes on a downward spiral of his own when he can't grapple with his role in Bryce Walker's death. To cope, he shuts himself out from most of his friends and turns to alcohol, culminating with him nearly committing drunken date rape, before he luckily gets back on his feet.

For Butler, Zach's arc proves that community is key for the Liberty High students to get through anything. "I guess for Zach, it's like, the second you turn away from that community and you isolate yourself and you allow yourself to go into your own dark hole, that's when things become dangerous," he explained. "The key is community, and then to speak up when you see something going on that's wrong."

Zach's character experienced the consequences of not opening up to others in the past, specifically when it came to his secret relationship with Hannah Baker, who created the 13 tapes that the show focused on to begin with. And Butler said that seeing all the characters go through a similar experience hammers home the importance of community. "All the secrets that people are keeping in and not telling the community, and they're not speaking up about, these are the catalysts for a lot of issues," he said. "It's not only the sexual assault, but also feelings. Zach had feelings for Hannah Baker and he didn't speak on them and he didn't explain them, and that led to a lot of hurt on both sides."

More like this
'The Queen’s Gambit' Season 2 Tweet Wasn’t From Anya Taylor-Joy
By Mary Kate McGrath, Jack Irvin and Grace Wehniainen
Netflix Shut Down 'Bridgerton' S3 Rumours About A “Very Dark” Storyline
By Bustle
Ozzie’s Coming Out Scene With Kitty On 'That ’90s Show' Has Twitter Sobbing
By Brad Witter
Ashton Kutcher Wants Danny Masterson “To Be Found Innocent” In Rape Retrial
By Jake Viswanath
Get Even More From Bustle — Sign Up For The Newsletter
From hair trends to relationship advice, our daily newsletter has everything you need to sound like a person who’s on TikTok, even if you aren’t.