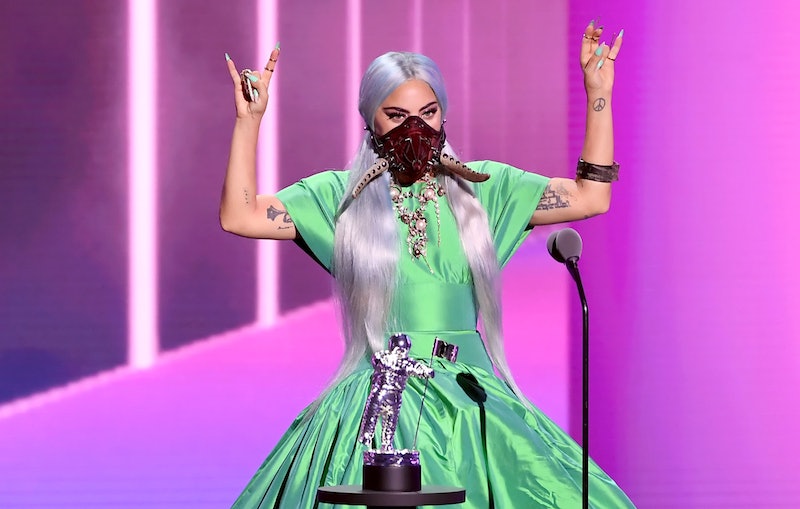 After being presented with awards for Artist of the Year, Best Collaboration, and Song of the Year at the 2020 VMAs, Lady Gaga won the show's first TriCon Award, which honored her multifaceted career as a musician, actress, philanthropist, fashion influence, and more.

"It means more to me than you probably even realized," Gaga said in her acceptance speech. "I've been making music since I was a little girl and even though I had really really big dreams, I truly never imagined that someday I would be given an award like this that honored so many of my passions."

The "Rain on Me" singer then made a call to action, encouraging viewers to follow their own lofty aspirations. "I want to share this award with everybody at home tonight ... that is their own form of a TriCon," she said. "I wish for you to think right now of three things that define who you are and take a moment to reward yourself for your bravery." She went on to acknowledge the challenges brought by 2020 before making a bold promise. "What I see in the world is a massive triumph of courage," she said. "A Renaissance is coming, and the wrath of pop culture will inspire you and the rage of art will empower you."

Ahead of the presentation, there was — and still is — some confusion about what exactly the TriCon Award is. Some wondered if it's a rebranding of the annual Video Vanguard Award, which was given to Missy Elliot last year.

"Couldn’t have received an award like this without everyone I love," Gaga tweeted afterward. "Thank you for supporting and loving me. I love the world so much."