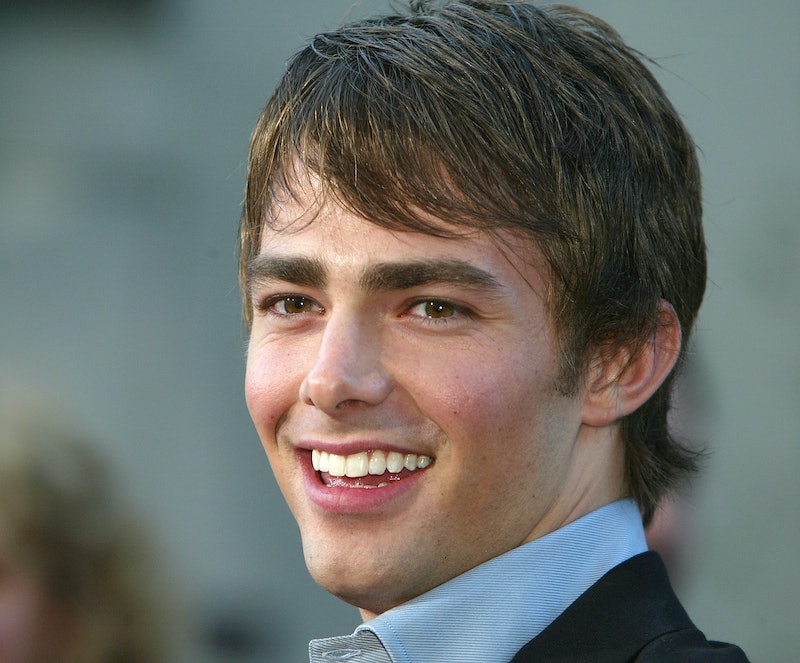 Jonathan Bennett turns 33-years-old on Tuesday, June 10 and is currently the host of the new MTV series Copycat, but to Mean Girls fans he'll always be Aaron Samuels. That's because Aaron Samuels was the perfect teen comedy crush: he was sweet and funny, he was way cute, had two first names (we like that call that Jake Ryan Syndrome), he heroically chased a purse snatcher into the projection room above the auditorium, and he looked really sexy with his hair pushed back. (Don't you think he looks sexy with his hair pushed back?)

In honor of the actor's 33rd birthday, we came up with 33 reasons why — even ten years after the release of the still-wildly popular Mean Girls — we still love the character that made him famous. (Honestly, we could probably come up with about a million reasons, but 33 made sense for his birthday.) So Happy Birthday, Jonathan! Here's 33 reasons why we still love you. And by you we mean Aaron Samuels, the part you were destined to play.

1. He's sweet and forgiving. Not too many dudes would have forgiven Cady for all of her scheming and plotting, let alone barfing on him.

4. He got a kick out of Cady's "unsexy" Halloween costume. It's an ex-wife. He gets it!

5. Sure, he's bad at math, but he's willing to tutor you. Really, he should have been the one being tutored, but oh well.

6. He plays sports! Don't forget, practice is in the projection room above the auditorium.

7. He enjoys the smell of peppermint. Even if it was meant for a foot and not a face.

9. He looks extra cute in his football outfit during the Halloween party. I mean can you blame Regina? He's gorgeous.

10. No, really, he's gorgeous. No wonder Regina and Cady were both vying for his attention, even though that's against the rules of feminism or something.

11. He didn't like when Cady dumbed herself down for him. He was much more interested in knowing the real her.

12. He likes his mother and spending time with his friends. A deal breaker for Regina, apparently.

13. He will hang out with you backstage after you perform at the Christmas pageant. And/or walk down the hall with you and your friends. Even when one of them falls into a trashcan.

15. He refuses to cheat on Regina with Cady. Even if she is a terrible human being, Aaron isn't.

16. He lives by the motto "There's good and bad in everybody." Even Regina.

18. He smiles when he sees Cady's childhood pictures from Africa. Aw. That's when you knew he really liked her.

21. He went to Northwestern. Good-looking and smart.

22. He was a popular high school kid, but was never a jerk. It's Mean Girls, not Mean Boys.

23. He throws a pretty solid Halloween party. Lucky for him, "Halloween is the one night a year when a girl can dress like a total slut and no other girls can say anything about it."

24. He doesn't ask stupid questions like "Is your muffin buttered? Whould you like for me to assign someone to butter your muffin?" Jason is such a little skeez.

25. He'll sit with you and your girlfriends at lunch. It might cause an imaginary cat fight, but that's the risk you have to take.

26. He'll chase after a purse snatcher for you. Even if the purse snatching was a set up.

27. He knows when to walk away from something. (He did not make a cameo in the unforgivable Mean Girls 2.)

28. He doesn't slug Shane Oman, even though he has every right to. He was hooking up with his girl. Not cool.

29. He's so fetch. If anyone was going to be able to make fetch happen, it was Aaron.

30. He sticks up for Miss Norbury in the embarrassing aftermath of the drug charges. What a good student.

31. He'll dance with you at the Spring Fling and finally plant a super sweet kiss on you. That's the best case scenario for being grounded, ever.

32. He reminds us that there's no love that stacks up to your first major high school crush. Even if our first loves didn't look like Aaron Samuels.

33. Did we mention he's totally gorgeous? Oh my god, you're like so in love with him.