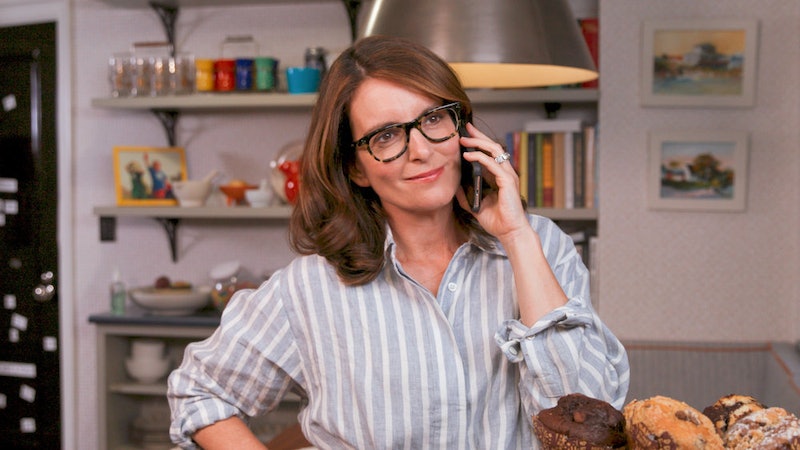 Spoilers ahead for the 30 Rock reunion special. Seven years after saying goodbye, the TGS crew reunited during the 30 Rock reunion special on Thursday night. The hour-long Peacock commercial — uh, episode — picked up amid the coronavirus quarantine, with all of the characters hunkered down in their respective homes/mansions. Jack Donaghy (Alec Baldwin) calls Liz Lemon (Tina Fey) to inform her that they want to do a TGS reboot, and she reluctantly accepts the task of Zooming the rest of the cast and crew to see if they're in. It's during these calls that we learn what everyone has been doing for the last few years. Here's the breakdown.

Not much has changed in Lemon's life. Her kids are teenagers now, and she's still happily married to Criss (James Marsden). Liz clearly misses working at TGS, but she also doesn't want to do a reboot of her old show. Instead, she's embraced the pandemic by yelling at men who aren't wearing masks and eating too many muffins. At the end of the episode, Kenneth asks her to come back to NBC and write a pilot, so she'll probably be working on her night cheese again in no time.

Tracy has relocated to Canada, where he enthusiastically sings the national anthem and speaks to his extensive fish collection. He's a huge movie star, and he has a fittingly strange acting process: reading the dictionary in front of a green screen (look out for Jurassic Green Book coming later this year). He also won a silver medal for racewalking.

Having been promoted from an NBC page to the head of the network, Kenneth is still as cheerful as ever. But despite the fact that Ted Danson and The Rock come to his Zoom parties, he can't help but feel like they're only telling him what he wants to hear. His assistant, Vivica (also played by Jack McBrayer), is also in love with him, but Kenneth is too dedicated to his job to reciprocate her obvious advances. Fortunately, he's got taste when it comes to choosing new programming, and even his former TGS coworkers can't find anything bad to say about his presentation.

Jenna (Jane Krakowski) has been in what she calls "famous person jail" ever since she pooped in Mandy Moore's Thermos at a diabetes event. She hasn't been able to get the This Is Us star to forgive her, so she's occupied herself during the pandemic by mistaking people cheering for essential workers as unsolicited applause for herself. She also tried to be in that infamous "Imagine" video, but she started at too high of a register, so they didn't include her footage. Later, she gets a chance to make up for it, muting Gwen Stefani so she can sing an inspirational song about NBC to close out the special.

Simply put, Jack hates retirement. He may be rocking the hell out of a sweater and sipping red wine in a beautiful yard, but he's so bored that he confesses to Liz he picked up baking. Fortunately, Kenneth offers him a position at Peahen — NBC's new vertical for women — which he readily accepts.

The endlessly depressed Pete Hornberger (Scott Adsit) is actually doing well for himself now that he's switched up his look. He loves black eyeliner, wears a fedora, and has a tattoo on his temple. The most surprising part? His wife Paula is really into it. Good for them.

Toofer (Keith Powell) has moved on up in the world and become a serious screenwriter who's penned a variety of Hallmark Christmas movies (each of which involve the words "Christmas" and/or "Prince"). But unfortunately, the network only pays him in holiday ornaments.

Now dating and extremely into each other, the two TGS writers (John Lutz and Sue Galloway are married in real life) share a tender makeout session during their Zoom call. Frank is a little too into it.

Jack's former assistant is now a producer at Blumhouse, where he's launched a horror movie franchise based on Liz.

In the end, Kenneth decides not to revive TGS, which is probably for the best given that most of his old coworkers have moved on to other things. Similarly, while it was nice to see what all the 30 Rock characters have been up to, this brief check-in is all we really need from them for now.