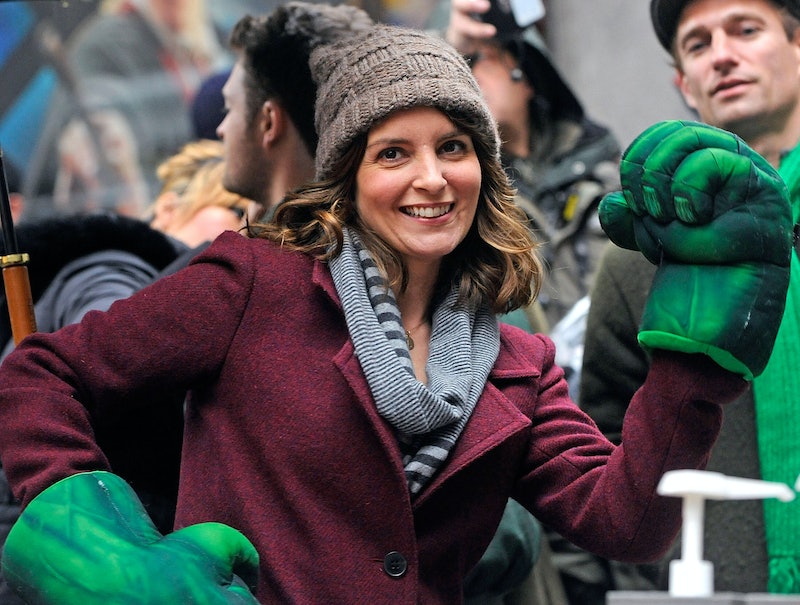 It's time break out a Snuggie and start working on your night cheese — 30 Rock is coming back for one more quirky adventure. NBC released the teaser trailer for 30 Rock's upcoming reunion episode, which promises to show fans exactly how the cast and crew of TGS have been handling the ongoing coronavirus pandemic. The scripted special will premiere on July 16, the day after 30 Rock arrives on NBC's new streaming platform, Peacock, and catch fans up with Liz Lemon (Tina Fey), Jenna Maroney (Jane Krakowski), Tracy Jordan (Tracy Morgan) and Jack Donaghy (Alec Baldwin) seven years after the final episode aired.

The teaser begins with Liz showing off her impeccable social skills — this time, she's screaming at a stranger on the street for not wearing a mask despite the ongoing pandemic. "You scared of the virus now?" she asks, taking off one cloth mask to reveal a second mask, printed with an image of Liz's bared teeth. "I already had corona, I'm on my way to donate plasma," the man replies, running away from her. "Boom! Another successful interaction with a man!" Liz shouts afterwards, celebrating in the street.

Meanwhile, the rest of the TGS staff appear to be in isolation, with Jack giving Liz a technologically-impossible phone call from his house in the Hamptons. "How did you slap me [through the phone]?" she asks at one point, to which Jack casually responds, "I have the iPhone 40." (Of course he does; what is he, a farmer?) Over in their homes, Tracy and Jenna are screaming and crying, respectively, which is exactly how all 30 Rock fans would assume the fictional celebrities would be handling quarantine.

"Dreams do come true," Jenna sobs at one point, effectively summing up the feelings of comedy fans everywhere when they discovered that there would be one more episode of 30 Rock to enjoy. The show's official Twitter account echoed those sentiments by sharing the teaser trailer. "Dreams do come true!" the caption reads. "#OneMore30Rock is coming your way July 16.

The 30 Rock reunion episode comes less than a month after Tina Fey requested that four episodes featuring blackface be removed from all streaming services in the wake of protests supporting the Black Lives Matter movement. “As we strive to do the work and do better in regards to race in America, we believe that these episodes featuring actors in race-changing makeup are best taken out of circulation," Fey wrote statement obtained by Variety at the time.

"I understand now that ‘intent’ is not a free pass for white people to use these images," she continued, adding that "I apologize for pain they have caused. Going forward, no comedy-loving kid needs to stumble on these tropes and be stung by their ugliness. I thank NBCUniversal for honoring this request."

More like this
'Bridgerton' S3 Teases Exciting Social Season For Penelope Featherington
By Bustle
The First Trailer For 'That '90s Show' Includes So Many Nods To The Original Series
By Jack Irvin, Alyssa Lapid and Grace Wehniainen
'Wakanda Forever' Is Already Opening Doors For Mabel Cadena
By Grace Wehniainen
Courteney Cox Recreated An Iconic 'Friends' Scene To Surprise Fans
By El Hunt
Get Even More From Bustle — Sign Up For The Newsletter