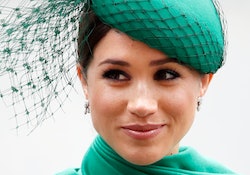 In 2010 the UN Foundation set up the Girl Up initiative. The scheme was designed to empower, support, and help young leaders who are doing amazing things in their communities to achieve lasting change. The scheme has worked with 65,000 girls in nearly 120 countries. They held their leadership summit over July 13-15 with some seriously exciting guest speakers, including Meghan Markle. It’s estimated that 40,000 attendees from 172 countries streamed this year's event and in her speech, Meghan highlighted that, even though the Summit took place virtually, there’s so much power in coming together in the way that they did.

Meghan was joined by Michelle Obama, Hilary Clinton, Nadia Murad, and other inspiring public figures to give speeches to the young leaders who tuned into the 2020 Girl Up Summit. Touching on the Black Lives Matter demonstrations that have gone on around the world, as well as gun reforms efforts and mental health initiatives, Meghan congratulated the young leaders who are already making massive moves in their respective communities.

In her speech Meghan also spoke about how challenging it can be to bring about change. Speaking about her own experiences, she said that the hardest thing she has found is "chasing [her] convictions with action," but went on to explain how encouraged she is to see young Girl Up members doing exactly that.

Below I have spotlighted these powerful moments along with other quotes and takeaways from Meghan's speech.