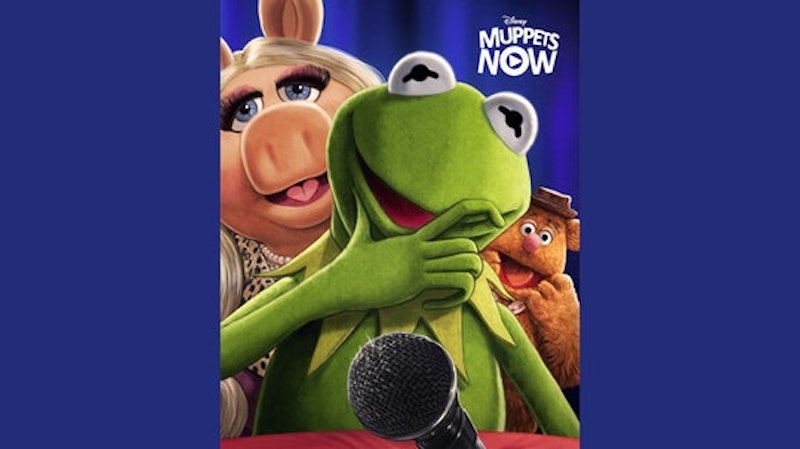 That’s right! The classic variety show starring Kermit the Frog, Miss Piggy, Gonzo, and all the rest of your favorite felt friends will finally be available to stream on Disney+ starting February 19—alongside all the other Muppet classics, like The Muppet Movie, The Great Muppet Caper, and Muppets Most Wanted. Also, check out the new series, Muppets Now.

Debuting in 1976, The Muppet Show ran for five seasons, won four Emmys, and welcomed a ton of high-profile guests along the way, including Steve Martin, Rita Moreno, Elton John, Mark Hamill, Gladys Knight, Johnny Cash...and the list goes on and on.

With The Muppet Show making its debut on Disney+, we bet it’s time for a little Muppet refresher. Wocka wocka on over for 6 facts you probably didn’t know about the Muppets, and sign up for Disney+ today to experience its treasure trove of fuzzy Muppet glory.

1. Kermit the Frog Hasn’t Always Been A Frog

When Kermit made his TV debut on Jim Henson’s series Sam and Friends in 1955, he hadn’t yet morphed into his final amphibian form—at the time he resembled more of an amorphous lizard. The early Kermit also hadn’t yet learned the perils of being green—he was actually a “milky blue” hue, according to author Brian Jay Jones in Jim Henson: The Biography. It wasn’t until the failed 1962 pilot Tales of the Tinkerdee, that Kermit acquired the signature pointy collar that would help solidify his persona as a frog. Regardless of species, the character always held a special place in Henson’s heart: He voiced Kermit until his death in 1990.

2. Rowlf Was The Muppets’ First Breakout

Though Kermit was charming audiences in the local Washington, D.C. market, where Sam and Friends aired, he hadn’t yet broken big when another Muppet took the nation by storm in the early 1960s. Rowlf, the big-eyed, floppy-eared dog, was designed by Henson and his team for a series of Purina Dog Chow commercials in Canada, but Rowlf soon became a regular fixture on The Jimmy Dean Show, hosted by the titular country singer (and future sausage purveyor). The cuddly canine proved so popular, according to Henson biographer Jones, that he often received more fan letters in a given week than the variety show’s own (human) host!

Henson didn’t want to be pigeon-holed as a children’s entertainer, so with the help of his agent—who also represented Gilda Radner, John Belushi, and Lorne Michaels—he landed a gig on the first season of NBC’s fledgling Saturday Night Live in 1975. Henson imagined a whole new set of Muppets for the sketch-comedy show—a boorish royal family who reigns over the fantastical Land of Gorch (also the name of the segment). King Ploobis and his court appeared in some 15 episodes, but ultimately weren’t a good fit for the show. Henson parted ways with SNL just as production on The Muppet Show was ramping up.

4. It Took a Few Tries to Launch The Muppet Show

Before there was The Muppet Show, there was The Muppets Valentine Show and The Muppets Show: Sex and Violence, two mid-1970s TV specials that essentially served as pilots that were never ordered to series. A British producer named Lew Grade recognized the Muppets’ TV potential, however, and signed a deal with Henson. The Muppet team flew to the U.K. to film the series, and Grade gave CBS the syndication rights to air the series in the U.S. The show (and its ear-worm of a theme song) debuted in 1976.

5. Miss Piggy Was Almost a Ghost

6. A Full House Star Moonlighted on The Muppet Babies

In 1984, the Muppets went back to the nursery for the animated TV series The Muppet Babies, in which pint-sized versions of the characters lived together and were watched after by a benevolent caretaker named Nanny (voiced by Leave It to Beaver actress Barbara Billingsley). In season 3, the show welcomed a new voice actor into the fray: an up-and-comer named Dave Coulier, otherwise known as the future Joey Gladstone on Full House (which would debut soon after). Coulier took over the roles of Animal and Bunsen from another well-known comedian, Howie Mandel, and over the years, Coulier would voice a handful of characters, including Honeydew and Statler and Waldorf. The Muppet Babies (sans Coulier) was relaunched in 2018, starring Jenny Slate, Dule Hill, Rachel Bloom, and a host of other talents. Unfortunately, there’s no word yet on whether Mr. Woodchuck will ever land a guest-starring role.

Sign up for Disney+ now for your front row seat!

More like this
'Brookside' Is Coming Back & Soap Opera Fans Are Going Wild
By Sam Ramsden
12 Years Ago, Austin Butler Manifested His Oscar Nom In This Disney Movie Scene
By Jake Viswanath
Rupert Grint Just Shared A *Major* Update About Ron Weasley’s Future
By El Hunt
Sandra Bullock’s Razzies Speech Proves She’s The Ultimate Miss Congeniality
By Sam Ramsden
Get Even More From Bustle — Sign Up For The Newsletter
From hair trends to relationship advice, our daily newsletter has everything you need to sound like a person who’s on TikTok, even if you aren’t.