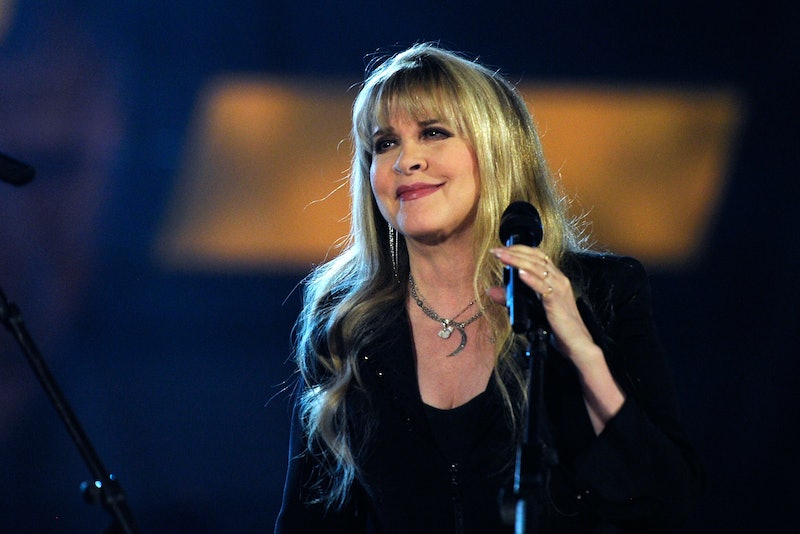 Rock and roll icon Stevie Nicks is having a millennial moment. Most of her discography may have been made before any millennials were born, but there’s no doubt that we’re witnessing a Stevie Nicks pop culture renaissance. The past year has been busy for Nicks: she’s appeared on the cover of Rolling Stone for the first time in 30 years, popped up as a guest mentor on The Voice, released a new record, and reunited with Fleetwood Mac for one of 2014’s highest grossing tours. Not to mention the fact that it’s hard to walk into an Urban Outfitters without seeing her face, whether on a Fleetwood Mac record or a new biography.

Ask your mom who Stevie Nicks is, and she might fill you in on the heyday of rock and roll decadence, her signature twirls, and famous love affairs. (My mom likes to dreamily recount the days of her youth, when she dressed like Nicks in flowing black chiffon and platform boots.) But Nicks is not just an influence for your parents’ generation.

If you're a millennial woman looking for advice on life, love, work, and everything in between, look no further. Here are eight reasons why Nicks might just be your new (to you, anyway) rock and roll heroine:

She takes her role as "fairy godmother of rock and roll" very seriously.

Nicks has been a source for young women rockers since the '90s, with famous friends like Sheryl Crowe and Courtney Love citing her as a source for inspiration and advice not only musically, but in life, as well. These days she serves as a mentor to the next generation of gold dust women, from Vanessa Carlton (she’s given her input on many of Carlton’s albums and even officiated her wedding in 2013) to Tavi Gevinson to the sisters of Haim.

“If you have a dream and you believe in it, don’t let anybody tell you that you can’t have that dream,” Nicks tells audiences while prefacing the song “Gypsy” on the current Fleetwood Mac tour.

The story is a highlight of the concert, as she recalls the “vision of success” she had the first time she visited the Velvet Underground, a famed clothing store in San Francisco that famous female rockers like Janis Joplin and Grace Slick frequented. She spent most of her twenties struggling with then-boyfriend Lindsey Buckingham to make it, working as a waitress and cleaning lady to get by. But she stuck with her passion, and urges everyone to do the same. In today’s crazy world, it’s refreshing to hear someone so successful encourage you to dream and not settle.

She’s open about her past and drug use.

Part of the allure of Fleetwood Mac was their infamous drug use throughout most of the ‘70s. But Nicks is known for having burned a hole through her septum through excess, and she isn’t shy to admit it. She also doesn’t sugarcoat her eight year addiction to prescription drug Klonopin following cocaine detox.

“Save your money,” she advises anyone on a similar path (via an interview on OWN), “because it's gonna cost you $50,000 to go to rehab, because you will have to go or you will die.”

She doesn’t apologize for being single or childless.

There is a notion that, should a woman choose a career over a relationship or children, her life is incomplete. Nicks is very vocal about her decision to “follow her muse” and not let a man tie her down, inspiring other women to acknowledge that it’s not selfish to admit they might not be up for the whole wife-and-mother thing. As she told the New York Times in 2014:

It would be fun if I could find a boyfriend who understood my life and didn’t get his feelings hurt because I’m always a phone call away from having to leave in two hours for New York or a phone call away from having to do interviews all day long. It’s not very much fun to be Mr. Stevie Nicks. [...] If it were to happen to me I’d be thrilled. But when I’m 90 years old and sitting in a gloriously beautiful beach house somewhere on this planet with five or six Chinese Crested Yorkies, surrounded by all my goddaughters who will at that point be middle-aged, I’ll be just as happy.

She’s a fervent feminist and speaks out about of women’s rights.

Nicks is pretty fearless, and one thing she’s definitely not afraid of is the F word: feminism. The singer rose to fame in the ‘70s, when rock and roll was mostly a boy’s club, and she pushed to change the perception that women should be treated as anything less than.

“We fought very hard for feminism, for women's rights," Nicks said at a SXSW talk in 2013. "What I'm seeing today is a very opposite thing. I don't know why, but I see women being put back in their place. And I hate it. We're losing all we worked so hard for, and it really bums me out."

She’s also stated her support for Hillary Clinton’s presidential campaign, saying that there are no great standout male candidates in either party — Hillary’s “the one.” Fleetwood Mac’s “Don’t Stop” was Bill’s campaign song in 1992, so maybe we’ll see Nicks back Clinton with a tune or two.

She remains authentic and true to herself.

The legendary singer lives in a world of magic and mysticism that she has created. You will never catch her passing up her signature black chiffon, ornate shawls, and platform boots for jeans and a tee shirt. She will never stop writing about witches and ghosts and fairytale romances, either.

Nicks created an image and persona in 1975 and sure, trends may come and go, and she may be mocked for it, but she has stood by her unique style and work for 40 years. Her witchy, gypsy look is in again, having inspired the latest collections from designers like Chloe and Reem Acra.

Kim Kardashian may have just released a book of selfies, but Nicks beat her to it. Nicks has been taking elaborate self portraits since 1975. Most of them went into shoeboxes, never to be seen again. That is, until October, when Nicks unveiled an entire gallery show of stunning old Polaroids to accompany the release of an album of new studio recordings of old demos from the same time period.

At 67, she shows that women “of a certain age” aren’t going anywhere.

If anything, the past few years have been some of the biggest and busiest in Nicks’s career. She’s been honored as a BMI Icon for her songwriting, given a USO Achievement Award for her charity work with recovering soldiers, cameoed on American Horror Story, released a new album, and embarked on a year-long world tour with Fleetwood Mac.

For several nights a week, she powers through a three hour set list, twirling, dancing, and shaking her tambourine without pause. She may be 67 today, but don’t expect her to slow down anytime soon.

More like this
Adele’s All-Female Lineup Includes Kacey Musgraves, Mahalia, & Self Esteem
By Shahed Ezaydi
Olivia Rodrigo’s Song Dedication To 5 SCOTUS Justices Sent A Strong Message
By Grace Wehniainen
Will Beyoncé Be At The BET Awards To Perform “Break My Soul” Or Attend The Show?
By Jake Viswanath
Lily Allen Was “Quite Emosh” After Performing Sober At Glastonbury Festival
By Stephanie Topacio Long
Get Even More From Bustle — Sign Up For The Newsletter