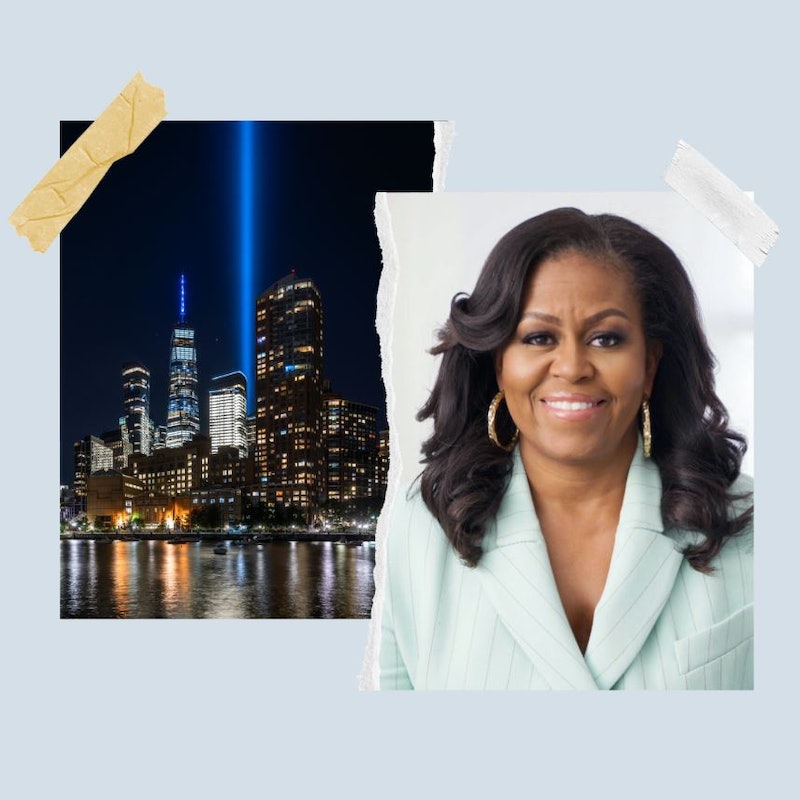 Twenty years after the Sept. 11, 2001 terrorist attacks, it’s clear that Americans will indeed #neverforget the lives lost. As in previous years, social media was a place where people around the world could share tributes and remember the victims. Among them were celebrities such as former First Lady Michelle Obama, model Gigi Hadid, and actor Ryan Reynolds, who reflected on the now two-decade-old tragedy.

For this year’s anniversary, President Joe Biden and former Presidents Barack Obama and Bill Clinton attended a ceremony at the National September 11 Memorial, where the Twin Towers once stood. They were joined by First Lady Jill Biden and former First Ladies Michelle Obama and Hillary Clinton as they honored the nearly 3,000 people who died on 9/11. Of course, that wasn’t the end of their tributes. Biden joined the many government officials and leaders who paid tribute on Twitter and Instagram, posting a video that shared the story of his friend Davis, who lost his son when the South Tower collapsed. He then went on to acknowledge the loss of all the families and the countless heroic actions.

“America and the world commemorate you and your loved ones. The pieces of your soul,” the POTUS said in part. “We honor all those who risked and gave their lives in the minutes, hours, months, and years afterwards.”

Barack Obama also honored the losses, and he also went on to reflect on “what we’ve learned in the 20 years since that awful morning.” He noted that the list “is long and growing” but emphasized that “America has always been home to heroes who run towards danger in order to do what is right.” It was a message The Rhythm Section star Blake Lively was moved by. Reposting it in her Instagram stories, she wrote, “Tap for caption. So beautifully said.”

Meanwhile, Michelle Obama recalled the morning of 9/11 and how she had just dropped daughter Malia off at her first day of nursery school when she heard about the attacks on the radio. “The uncertainty and anxiety set in almost immediately,” she wrote in part. “What was happening? Had the world just changed? What kind of future were our girls going to enter?”

Actor Kate Hudson also wrote about her experience on that fateful day, remembering how “those of us who were living in New York saw a different city. A city in mourning yet together. Working together, supporting each other no matter what their beliefs, politics or economics.” Her fellow New Yorker, model Gigi Hadid, who didn’t live in New York City at the time, similarly highlighted the “resilient spirit of NYC” and how she’s “proud to be amongst it” now.

Ryan Reynolds, a Canadian, specifically honored his compatriots who died. The Deadpool star reposted a photo of a plaque “in remembrance of the Canadians lost,” showing the 26 names.

Across the pond, the royal family showed its support as well. The official Twitter account shared Queen Elizabeth II’s message to Biden, which said in part, “My thoughts and prayers - and those of my family and the entire nation - remain with the victims survivors and families affected, as well as the first responders and rescue workers called to duty.”

Meanwhile, another former first lady, Melania Trump, called on Americans to “never forget the innocent lives that were lost and the selfless heroes who emerged.” Like Trump, Keeping Up with the Kardashians vet Kris Jenner paid tribute to the “unforgettable display of heroism,” making it clear that she’ll “never forget that day.”

Singer Paula Cole tweeted that she was “watching the 9/11 memorials and just crying,” while Beverly Hills, 90210 vet Gabrielle Carteris wrote that the family and friends of survivors “are in our thoughts and prayers.”

Filmmaker and actor Kevin Smith had a flight on Sept. 11 this year, and he poignantly wrote, “Remembering all those folks who never got a chance to arrive at their destinations 20 years ago.”

Reese Witherspoon shared her prayers for the families affected in an Instagram story, and she, fellow actor Jennifer Garner, and singer Ciara all noted how they’ll “never forget.”

Talk show host Ellen DeGeneres sent her love to New York specifically, but also to everyone.

Summing it up beautifully, Never Have I Ever creator Mindy Kaling described her experience of being in New York City on both the day of the tragedy and again on the 20-year anniversary. “I was in New York twenty years ago and remember feeling scared and helpless,” she wrote on Instagram. “That’s not the feeing today. I’m lucky to be here again to witness the memorial. The people here rebuilt and recovered, but they will never forget. I love you, New York.”

More like this
Kourtney Kardashian Claps Back At Pregnancy Speculation On Instagram
By Jake Viswanath
Bimini, Tia Kofi & More React To Cherry Valentine’s Death
By Catharina Cheung
10 Photos Of William, Harry, & Their Cousins Honoring The Queen Together
By Stephanie Topacio Long
William & Kate Shared How Their Kids Are Doing As They Mourn The Queen
By Stephanie Topacio Long
Get Even More From Bustle — Sign Up For The Newsletter