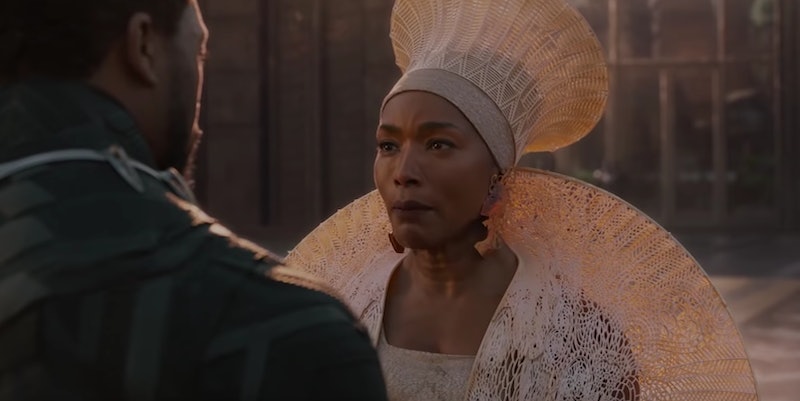 "Wakanda forever." That's the first quote from Black Panther (costume designer: Ruth E. Carter) that has resonated with the millions of people who can't wait for the movie's Feb. 16 release. If you check Twitter, it's hard to ignore all of the people repeating the line, which Okoye (Danai Gurira) proudly proclaims in one of the Black Panther trailers. It's just one of the many great Black Panther quotes that will stay with audiences for a long time after they walk out of the movie theater. That is, if they can get into the movie theater, since Black Panther has sold more advance tickets than any other Marvel film, according to IndieWire.

"Anticipation" doesn't even capture what tons of people are feeling about Black Panther, as the movie is already being lauded as a revolutionary film that represents Africa in a completely new way. The film stars Chadwick Boseman as T'Challa or the Black Panther, Lupita Nyong'o as Nakia, Michael B. Jordan as Erik Killmonger, Letitia Wright as the brilliant princess Shuri, and more. Each of these characters is profoundly powerful and talented in their own ways. Black Panther will most likely not look like anything you've ever seen before, but the appearances are only part of it, as it has some of the most hilarious and empowering lines of any Marvel movie ever. These are some of the best quotes — besides "Wakanda forever," of course.