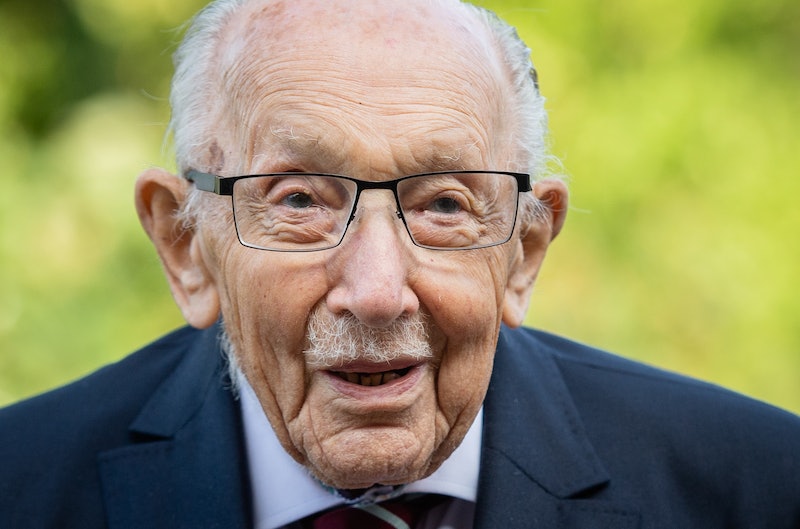 His story warmed the nation's hearts during the coronavirus crisis and, in a rare piece of good news, it's now been announced that a film about Captain Sir Tom Moore's life is in production. The biopic about the veteran, his life, and his fundraising efforts is due to begin shooting in 2021.

The film will tell the story of the WW2 veteran's battle with skin cancer, the road to rehabilitation following a broken hip, his rise to global fame, and his knighthood that came as a result of raising a stonking £38.9 million for the NHS.

The Radio Times reports that the biopic will also touch on his experience during the media frenzy, his number one hit "You'll Never Walk Alone" alongside Michael Ball, his book, and "how personal grief and the horrors of war shaped his life and inspired him to keep walking."

Choosing who'd make the film wasn't an easy one for the close-knit Moore family after being flooded with offers. However, according to Captain Tom's daughter Hannah, "what it boiled down to was trust." The family have decided to develop the biopic in collaboration with Fred Films and Powder Keg Pictures and the script will be penned by Nick Moorcroft and Meg Leonard.

Speaking to The Sun, Moorcroft said that he and Leonard were in close communication with Captain Tom and Hannah. “We are working side by side with them, spending a lot of time getting to know each other," he said. "This is about telling his story as authentic as it can be and making sure we protect his voice and message because it’s a strong and important one."

Although it has yet to be announced who'll play the title role in the film and Captain Tom acknowledges there aren't many 100 year old actors out there, The Sun reports that he's got a few suggestions. "I’m sure Michael Caine or Anthony Hopkins could do a wonderful job if they were prepared to age up."