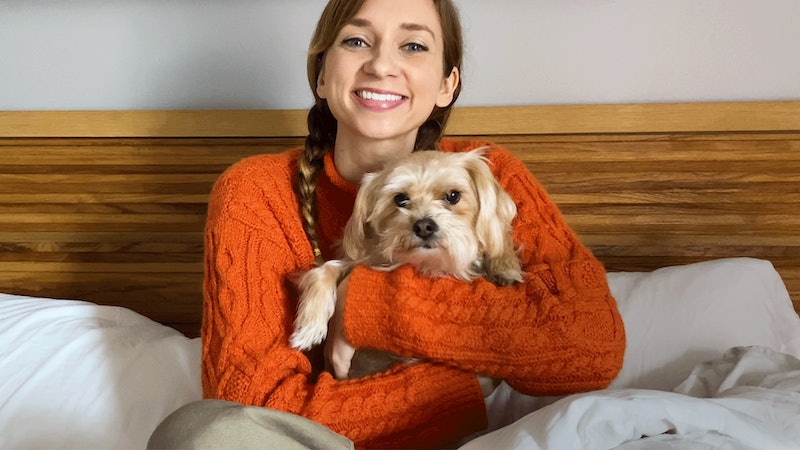 Sometimes it's hard to imagine that celebrities have anything in common with us common folks, but there are plenty of ways in which they're just like us. First and foremost? They've got pets, just like we do, and they love them just as much. In Bustle's new series, Meet My Pet, we went into the homes of our favorite stars and checked out their lives through the eyes of their furry little friends. Results varied, but all were adorable.

Take, for example, actor Lauren Lapkus and her dog, Franny. The pair have been inseparable during quarantine, and Lapkus has been passing the time by documenting their lives on social media — despite the fact that Franny isn't exactly a willing participant.

"She can always tell when I'm using her for social media purposes," Lapkus says. "She hates it."

Lapkus is an Emmy-nominated actor, improviser, and writer. She’s best known for her role as prison guard Susan Fischer on Netflix’s Orange Is the New Black — which won her a SAG award — and most recently she starred alongside David Spade in The Wrong Missy, a romantic comedy.

"Make sure to get that word in the dictionary," says Lapkus.

Franny's days are mostly spent like every other dog in quarantine: sleeping in late, going on walks, chilling in the yard, and barking at literally everyone who walks by. Not a bad deal, if you ask us. See more from Lapkus and Franny in the video above.

More like this
Dennis Quaid Dropped A Huge Parent Trap Revelation Via Taylor Swift's "Anti-Hero"
By Catharina Cheung
Owen Thiele Asked Sundance Attendees About Films That Don’t Exist
By Grace Wehniainen
Beyoncé Just Announced Tour Dates: Here's How To Cuff Tickets To Her 2023 Shows
By Jake Viswanath
Reese Witherspoon Confirms This Fan Favorite Will Return For 'Legally Blonde 3'
By Jake Viswanath
Get Even More From Bustle — Sign Up For The Newsletter
From hair trends to relationship advice, our daily newsletter has everything you need to sound like a person who’s on TikTok, even if you aren’t.