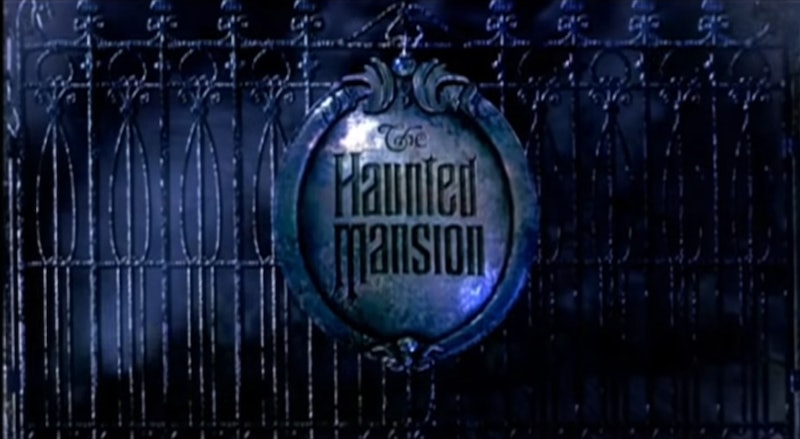 In news that will be music to Disney fans' mouse ears, a new Haunted Mansion movie is currently being developed by the company. The Hollywood Reporter first broke the news on Aug. 28, and revealed that Ghostbusters (the 2016 reboot) and The Heat writer Katie Dippold is tied to the live-action movie. Dan Lin and Jonathan Eirich are set to produce the movie, just like they did Disney's 2019 live-action Aladdin.

The film is based on Disneyland Park's theme park ride, not the one at Magic Kingdom in Walt Disney World, according to Variety. Those who have been lucky enough to visit each theme park know that the rides do vary slightly, including the mansion's exterior and the Hatbox Ghost featured in Disneyland's version, which Walt Disney World's does not have. But, overall, they are essentially the same, especially with the scenes and the storyline. There aren't any more details readily available yet, like production or release dates or if the film will lean more toward comedy, scares, or be a combination of both (like the attraction).

This certainly isn't the first time Disney has developed a movie based on one of its park attractions. In 2003, Disney produced its first Haunted Mansion movie called The Haunted Mansion starring Eddie Murphy and Marsha Thomason. More often than not, rides have been inspired by films, but there are times when Disney will turn an attraction into a movie. Believe it or not, there are actually seven movies that were rides before they were replicated for the big screen, which you can check out below.

Pirates Of The Caribbean

Of course, there is the Pirates of the Caribbean franchise starring Johnny Depp as Captain Jack Sparrow. It was based on the Pirates of the Caribbean attraction that opened in Disneyland in 1967 and then in Walt Disney World in 1973. There are currently five movies: The Curse of the Black Pearl, Dead Man's Chest, At World's End, On Stranger Tides, and Dead Men Tell No Tales. You can stream all of them on Disney+, except for On Stranger Tides, which you can watch on Hulu with a Starz add-on.

Another Pirates movie is currently in the works that is "female-focused" and completely separate from Disney's franchise starring Margot Robbie and written by Birds of Prey screenwriter Christina Hodson. There was also another Pirates reboot announced in 2019 from Disney and writer Ted Elliott (he wrote four of the original movies).

In 2002, Disney released a live-action movie called The Country Bears that was based on the attraction (it's not an actual ride, but a show with animatronic bears). Haley Joel Osment, Christopher Walken, and Brad Garrett starred in the movie. You can stream The Country Bears on Disney+.

Starring Kirsten Dunst, Steve Guttenberg, Nia Peeples, and Melora Hardin, Tower of Terror found inspiration from Disney's Hollywood Studios' popular attraction, The Twilight Zone Tower of Terror. Tower of Terror isn't available to stream yet on any platforms, but you can watch it on YouTube.

Tomorrowland is based more on an actual land than a specific attraction, but the film still found inspiration from a specific part of Disney theme parks. The movie was released in 2015, and has quite the cast, including George Clooney, Britt Robertson, Hugh Laurie, Tim McGraw, Kathryn Hahn, Judy Greer, and Keegan-Michael Key. Tomorrowland is currently streaming on Disney+.

The Dinosaur ride at Disney's Animal Kingdom first opened in 1998 and allows guests to "time travel" back to the Cretaceous period. The ride is definitely a thrill and somewhat scary, but the movie isn't exactly the same. Disney released a film in 2000 titled Dinosaur featuring the voices of Alfre Woodard, Hayden Panettiere, D.B. Sweeney, Julianna Margulies, and Samuel E. Wright (Sebastian from The Little Mermaid). The '90s film is currently streaming on Disney+.

The Jungle Cruise is an iconic ride that transports guests into the jungle and gives skippers the chance to tell hilariously bad puns, including the famed "Backside of Water" joke that fans cheer for every time. Of course, Disney turned the ride into a live-action movie starring Dwayne "The Rock" Johnson and Emily Blunt. The movie was originally set to release in October 2019 and then July 24, 2020, but due to the coronavirus, Jungle Cruise is now slated for a July 30, 2021 premiere.

Originally located in Tomorrowland at Disneyland and Magic Kingdom in Walt Disney World, Mission to Mars was first known as the Flight to the Moon attraction. It opened in 1975 but closed its doors at Disneyland in 1992 and at The Magic Kingdom the following year. In 2000, a film of the same name, Mission to Mars, was released and starred Tim Robbins, Gary Sinise, Don Cheadle, Connie Nielsen, and Jerry O'Connell. Currently, the film isn't available for streaming.

Before the reboot arrives, revisit the 2003 version of The Haunted Mansion starring Murphy as a beleaguered real estate agent with a mansion full of ghosts on his hands. The comedic film is streaming on Disney+.

Who knows which Disney ride will inspire another movie, but until then, fans at least have another Haunted Mansion movie (and more) to look forward to.